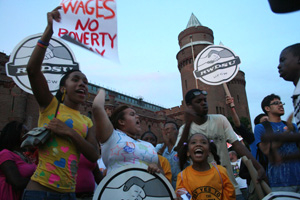 Refusing to promise a living wage, a New York retail developer has lost out on about $60 million in public subsidies. Campaigns are growing nationally to tie public money used in mega-developments to decent wage and working standards. Photo: KARA.

A retail developer in New York City has lost out on about $60 million in public subsidies because it and Mayor Mike Bloomberg refused to promise a living wage. The subsidy fight is one piece of a growing national push to tie public money used in mega-developments to decent wage and working standards.
The New York City Council twice turned down the handout for the Kingsbridge Armory project almost unanimously, overriding Bloomberg's veto 48-1 on December 21.

A coalition of community groups and the retail workers’ union, the UFCW-affiliated Retail, Wholesale and Department Store Union, celebrated the turn-down—the first rejection of a big taxpayer-funded development pushed by Bloomberg. The project is not expected to move forward.

“They felt they were doing us a favor to bring us these jobs, that any job is a good job,” said Desiree Pilgrim Hunter, a Bronx resident and KARA leader. “We decided they were bringing a Wal-Mart in sheep's clothing.”

The project promised 1,200 jobs, which KARA soon discovered were 600 “full time equivalent” positions split into twice that many part-time jobs. The retail union and the community group Make the Road New York unveiled a report in December revealing that a similar mall in Queens that received $48 million in tax breaks now offers 3,100 jobs with an average starting wage of $7.72.

“There are myths about retail: it’s for kids, it’s not real work,” said Jeff Eichler, an organizer with the retail union. “It’s all not true. People aren't in retail for pocket change anymore. Adults do it, families depend on it. It's a recognition of what this economy has become—which is why it's crucial these projects have higher standards when they're subsidized.”

Indeed, a December report from the Center for an Urban Future thinktank says 42 percent of Bronx workers over 18 make less than $11.54 an hour or $24,000 a year—the highest percentage in the city.

Labor divided over the redevelopment project, which would have retrofitted a World War I-era munitions storehouse and mustering site for soldiers into a suburban-style shopping mall.

The RWDSU, which represents workers at a nearby supermarket, held together a coalition that tried for years to shape the redevelopment. But as the city's decision-making moment arrived, building trades unions, satisfied with the developer's promise to employ 1,000 union workers in the construction, split. And Service Employees Local 32BJ, which represents security and maintenance workers, exited the KARA coalition in late 2009 and cut a side deal that assured union janitors and guards would be used at Kingsbridge as well as the developer's future projects.

Local 32BJ spokesman Matt Nerzig said he was “not aware” of a side deal. “Is this union, like many other unions, in talks with developers around the city about any number of projects that might be going up?” he asked. “Sure.”

Nerzig said 32BJ stayed involved until the end, working to bring the developer and the retail union toward a compromise. He added that “letting this deal fall apart with the creation of no jobs wasn’t good for anyone.”

Hunter said both the janitors union and the trades violated a pledge to stand together until the concerns of all were met, and criticized them for choosing self-interest instead of using their heft to pull up low-wage retail workers.

“32BJ and the trades expected us to push it to the edge, but ultimately they wanted a deal,” said Ava Farkas, a KARA organizer. “We need to follow through on our threats. If the city and developers know we’re going to cave, what incentive do they have to deal with us?”

Other groups, like the Bronx Board of Business Agents (the borough’s branch of the New York trades council) remain supportive of the community-labor coalition. “Labor’s under attack on all fronts,” said Farkas, a former UNITE HERE staffer who grew up 15 minutes from the armory. “If we keep thinking in the short-term interests of our organizations, we’re going to keep getting hit.”

Development plans at the armory have been a long time coming. The Northwest Bronx Community and Clergy Coalition began agitating to use the armory’s 575,000 square feet to house new schools and ease chronic overcrowding 13 years ago. The space, a massive landmark with a turreted red-brick façade, proved unworkable for schools, which gave way to a mixed-use plan including a movie theater, stores, and community-cultural space.

The ideas sprang from a poll the Northwest Bronx group held in borough congregations. They collected more than 2,000 cards that let residents outline their hopes for the space, which included a bookstore, computer center, farmers market, and YMCA.

Those goals didn’t mesh with what Bloomberg and Related, the developer, had in mind. Related was used to getting its way: the city handed it a $15 billion Manhattan project in 2004 along with hundreds of millions in tax breaks.

“The mayor’s vision was a shopping mall. Related told us, ‘we build malls,’” Hunter said. “That’s where the disconnect began.”

MAKE YOUR OWN LUCK

The developer and the mayor made clear their opposition to tying city funds to wage standards. “It is not government’s business to tell companies that they should pay more,” Bloomberg announced (before backtracking to say he thought minimum wage laws were OK). He said selfish unions and misguided activists would end up denying jobs to the most-impoverished borough.

The labor-community coalition also took to the streets, drawing 1,000 to an October rally and leading a July march that wrapped the block-long building in yellow caution tape to lay claim to the space.

An eleventh-hour compromise emerged: use city funds to subsidize higher wages at the development. But the City Council quickly shot that idea down, to the pleasure of advocates who asked why the city should provide incentives to retail employers to hold down wages.

After the mayor refused further compromise, the council soundly rejected the project. Now the borough president is suggesting the site could use federal dollars to attract small-scale green manufacturing.

WHEN IS A WIN A WIN?

Efforts to ensure that publicly subsidized developments pull up wages are catching fire across the country. Pittsburgh groups are angling for an ordinance that would guarantee industry prevailing wages for grocery, cafeteria, and hotel chains that tap taxpayer funds (it passed its first city-council test in December). In Connecticut, a decade-long fight to unionize the Yale-New Haven Hospital morphed into a campaign for a “community benefits agreement” when the hospital proposed an expansion.

The intense, drawn-out struggles suggest that even when community-union forces stay intact and make developers sign a deal, they still have their work cut out for them.

Four years ago, a New Haven labor-community coalition won an agreement tied to the hospital expansion, similar to what the Kingsbridge Armory activists sought. It provided for union construction, job training and local hiring, neutrality in union organizing, and other measures to protect housing affordability and the local environment. But once the city released building permits, organizers discovered little had changed—the hospital ramped up its anti-union campaign and broke one after another of its promises to the community.

“With union membership so diminished, we don’t have many forms of leverage, so these agreements become one way of bringing in community and exerting leverage,” said Stephanie Luce, a University of Massachusetts labor educator who studies these coalitions. “But can they get to scale, do they get enforced? Like living wage laws before them, some are and some aren’t.”