Tired of Teacher-Bashing, Union Educators Grow Their Own Schools 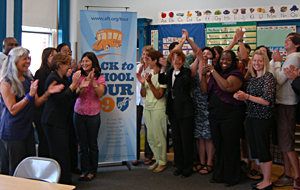 Attacked daily as the biggest roadblock to improving public education, union teachers have their work cut out for them, both in the classroom and in the court of public opinion.

They responded this fall, opening their own schools in two cities.

“Teachers have been getting the most blame and the most responsibility and the least amount of decision-making power,” says Lori Nazareno, who leads a new teacher-run school in Denver.

Teachers in Boston have their own school, too, and educators in Los Angeles are pushing for community-centered models—all while a hurricane of teacher-bashing is pushed ahead by school privatizers, the press, and Obama administration policy.

Three grades of the Boston Teachers Union School opened up two months ago. The young school, which will expand to K-8 by 2012, is part of the city’s controversial pilot school program dating from 1994.

The BTU, the school district, and the mayor initiated pilot schools in order to head off the rise of privately managed, publicly funded charter schools, which Massachusetts had approved earlier that year.

But the schools have been a point of contention ever since. A years-long battle between union and district ended in 2006 when the union won more paid hours for teachers, and in turn agreed to approve seven more pilot schools—including a union-run school.

Before it was all over, though, the union had taken a beating in the local press. “They kept calling me an ogre standing in the way of progress,” says Richard Stutman, BTU president.

The union now must prove that teachers can run a successful school—and one where work rules and quality education aren’t cast in opposition.

The school follows in the pilot school traditions of a longer school day and a less-scripted curriculum. But unlike its fellow pilots, the BTU hires solely from inside the district and enrolls students randomly from its section of the city. The school also pays teachers for working the longer day—a point of pride for the union.

The major difference at the BTU school is the lack of a principal. Teacher-leaders run the show, making all long-term decisions by consensus. “Anything that doesn’t have to be done today will be decided by a collective,” says Stutman.

As for the union contract, teachers are in the bargaining unit and work under nearly the same contract, but have a different relationship to it. After all, they’re the boss—to a degree.

Standardized tests remain the rubric for success, as they do throughout the education system. Stutman says the testing regime is easily manipulated by the city’s charters—which tout higher scores than district high schools but cherry-pick students and have what he calls “high eviction rates.”

Elementary charter schools, which can’t select their students, show no improvement in scores over district schools.

Stutman says that because teachers have more creative control, the new school will rate highly by any measure. But as its students enter grades that take state-administered standardized tests, the curriculum will inevitably bend toward test prep.

While Boston’s teacher-leaders aren’t yet burning bubble sheets, the development of teacher-run institutions itself signals a seismic shift.

SMOOTH START IN THE ROCKIES

Union teachers are at the helm at Denver’s Math and Science Leadership Academy. Members of the Classroom Teachers Association (a National Education Association affiliate) jumped at the chance to run their own school when the city began taking proposals for new educational models three years ago.

After 19 years of teaching in Miami, Lori Nazareno moved to Denver and became the lead teacher at MSLA, an elementary school with 130 students, grades K-2.

The school’s 12 teachers sit on decision-making committees that develop curriculum, professional development plans, and a vision of the school’s culture. The two lead teachers still teach two hours a day. “We designed it, we put this together, and we’re running it,” says Nazareno. “Everybody gets that it’s our responsibility.”

The school draws students by lottery from a working-class neighborhood on Denver’s southwest side, composed largely of first-generation Mexican, Somali, and Korean families. Sixty percent of its students are English-language learners, and up to 90 percent receive reduced-fee lunches.

Though they’ve maintained the district’s curriculum for math, science, and literacy, MSLA teachers take different approaches to teaching. For example, every Friday students undertake “serv-ice learning” projects that promote engagement with the community and teach skills through programs on renewable energy, hunger, and homelessness.

Teachers work under the local contract, but they waived provisions outlining a principal’s powers. At MSLA, educators assess each other.

And they’ve already shown that schools in less affluent neighborhoods can attract good teachers with the promise of more ownership. The school fielded around 30 applications for each position, and is already receiving dozens more for next year, when the academy adds a grade.

LA SCHOOLS IN THE BALANCE

In Los Angeles, the school board accepted bids in November for the management of 36 schools. The schools include 12 existing sites deemed low-performing as well as 24 new ones set to open in the next year to relieve overcrowding.

Charter companies are in a frenzy to snap up the sites, but the teachers union, United Teachers Los Angeles, is organizing with teachers and parents to keep them at bay.

UTLA gathered teachers and parents (and administrators) of the low-performing schools at union headquarters. There they wrote proposals for how they would transform their schools.

Superintendent Ramon Cortines will evaluate the proposals, consider teacher and parent votes at schools (and student votes at high schools), and make a recommendation to the school board in January.

However, final decisions will be made in February by the charter-friendly school board that approved the school-bidding idea in the first place.

The process will repeat for the next several years, as 300 LA schools come in for some form of shake-up.

Teams of union reps are trying to seize that opening to develop proposals with each school’s community. Though there’s no talk of a UTLA-run school yet, the union is pushing for greater autonomy for teachers and parents.

The union already has collaborated with the district on a variety of “alternative” schools that allow greater local control over a school’s curriculum, budget, and staffing.

“Parents are getting active, and it’s not just the union talking to parents, it’s parents organizing with each other,” says Ingrid Villeda, a UTLA rep working on proposals. Teams of parents are going door to door to build support for a community-centered model.

While teacher-run schools make strides in autonomy, creativity, and collective decision-making, they haven’t yet found a way to determine their own measures of success—a struggle that will continue during President Obama’s tenure.

The U.S. Department of Education released final rules in November for the contest over $4.5 billion in federal education aid. The money rewards states and districts that tie teacher evaluations and pay to student performance on standardized tests.

While Education Secretary Arne Duncan recently toned down his teacher-bashing, the White House’s rules are no friendlier. Obama’s “Race to the Top” program requires districts to close low-performing schools, many of which will reopen after firing and replacing the entire teaching staff.

A version of this article appeared in Labor Notes #369, December 2009. Don't miss an issue, subscribe today.
Related
Pandemic Discrimination Against Asian Americans Has Long Roots »
Draw the Line in Permanent Marker: Three Organizing Principles »
Viewpoint: A Year After Teachers Closed Them, New York City Schools Are Still Unsafe »
Despite Slow Vaccine Rollout, Teachers Are Being Pushed Back Inside »
Karen Lewis Lit the Spark »