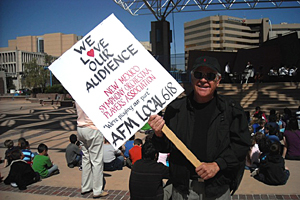 Even managers at healthy symphony orchestras have been eager to use the economic crisis to decimate wages and working conditions. All events for the New Mexico Symphony Orchestra are on hold after musicians had health insurance canceled without warning and were asked to take a 25 percent pay cut. Photo: Nathan Kahn.

The elegant on-stage evening dress worn by musicians in unionized symphony orchestras may be a lot more frayed than it looks from far away. The recession has killed or weakened many orchestras, and even managers at healthy organizations, like their peers across corporate America, are eager to use the crisis to decimate wages and working conditions.

Despite fierce protests from members of Local 72-147 in Dallas-Fort Worth, the Texas Ballet has replaced its musicians with pre-recorded music, and the Baltimore Opera has closed its doors entirely.

Live classical music has struggled since before the recession. The Colorado Springs Symphony, before it declared bankruptcy in 2003, proposed to pay musicians any money left over after paying the conductor, soloist, hall, and stagehands. In Tulsa, the chair of the now-defunct Philharmonic tried to replace per-diem payments for touring musicians with buckets of peanut butter on the buses.

Now, the poor economy has caused devastating cuts from corporate and private donors. Michigan Opera Theatre in Detroit, heavily dependent on the auto industry, lost more than 80 percent of its corporate funding. The company offered fewer performances and rehearsals, and chose operas with many fewer musicians. That lowered musicians’ annual salaries by a quarter, to about $7,000.

Full-time year-round orchestras, like the Cincinnati Symphony and the Minnesota Orchestra, and groups that play only part of the year, such as the orchestras of Wichita and Tucson, have all taken drastic cuts.

Laura Ross, secretary of the 51-member International Conference of Symphony and Opera Musicians, reported that 23 orchestras in the last year have negotiated agreements. Three re-opened contracts and at least 16 took concessions.

ICSOM members, the biggest-budget orchestras, where average annual salaries range from $28,000 to a very few earning more than $100,000, comprise one of two U.S. symphonic player conferences within the American Federation of Musicians (AFM). The Regional Orchestra Players’ Association is ICSOM’s 79-member counterpart. ROPA is made up of orchestras of all sizes and budgets, and average salaries range from $3,000 to $41,000.

Most groups chose to cut weeks from the season and try for restoration in a subsequent year, or sliced weeks but increased weekly scale. Others froze contract terms and extended agreements for an additional year.

Players are pushing back hard, thanks to solid assistance from AFM field negotiators and their symphonic conferences. Players say the key is determining if management’s claims of poverty are real or arise from opportunism or lazy fundraising. The union is holding trainings in reopener bargaining and “quick and dirty data analysis.”

Mobilized and educated musicians in the Grand Rapids Symphony mitigated losses at the bargaining table. They were faced with a proposal to cut three weeks from their 42-week season, transform two weeks of paid vacation into unpaid furlough, suspend 401(k) pension contributions, and raise employee contributions to medical insurance to 25 percent.

At the season’s first concert series, players leafleted the audience. Instead of warming up on stage, they stood at their positions in total silence until the concert began. Such an action was unheard of in Grand Rapids, where the orchestra had historically friendly labor-management relations.

The protests opened eyes on the other side of the negotiating table, and musicians recently ratified an agreement much improved from the previous offer.

In spite of solid musician support, things are not going as well elsewhere. All events for the New Mexico Symphony Orchestra (NMSO) are on hold after board members asked musicians to take a 25 percent pay cut. Health insurance was cancelled without warning, and musicians were notified 10 days after the fact.

At a recent Buddy Holly tribute by a nationally touring band, musicians set up pickets to tell patrons they weren’t playing back-up, as advertised. Many audience members, realizing they weren’t getting what they paid for, turned around and went home.

“Everyone loses in this situation: the relationships between the musicians and management will most likely never heal, the perception of the symphony to the community will take years to change, and the musicians’ financial hardships and stress from the weeks of lost paychecks will never be forgotten,” said Carla Lehmeier-Tatum, NMSO Orchestra Committee chair and ROPA president.

Barbara Zmich is a violist in two Michigan orchestras and secretary-treasurer of AFM Local 625 in Ann Arbor.