T-shirts Too Much for AT&T; Company Suspends Hundreds 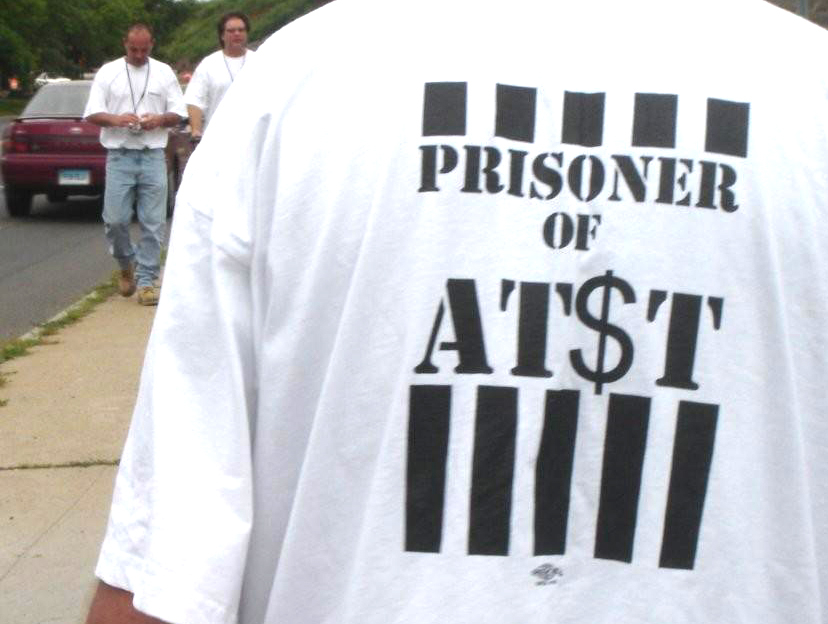 About 200 CWA members took a day’s suspension Tuesday rather than back down when AT&T demanded they remove T-shirts announcing they were the company’s “prisoners.” The union is fighting deep concessions in bargaining with AT&T, which made $12.9 billion last year. Photo: CWA Local 1298.

When AT&T demanded Communications Workers (CWA) members in Connecticut take off T-shirts announcing they were the company’s “prisoners,” they took a day’s suspension rather than back down.
About 200 members were suspended Tuesday.

“Nobody took them off. It was a mass exodus, a single-file line walking out of the room,” said Dan Coffin, a Local 1298 business agent. “The bosses just sat there with a deer-in-the-headlights look.”

After seven months of hard bargaining—in which the company has proposed to triple the amount workers pay for health care—AT&T workers in the Northeast are still without a contract. Since their fellow CWA members at AT&T in the Midwest and West Coast settled with the company in recent weeks, they’ve been taking a more confrontational stance. Members crashed a company-sponsored showcase at the Pilot Pen tennis tournament in late August, and the local has dispatched a plane around Connecticut with a banner denouncing the company’s greed.

The T-shirts, which fewer numbers have worn previously with far fewer suspensions, are printed with technicians’ identity codes on the front—and “prisoner of AT$T” on the back, a jab at an employer that booked a $12.9 billion profit last year.

“It’s sad they leave customers out of service over a shirt,” said Howie Coling, a Local 1298 business technician.

Some managers threatened workers with a week’s suspension. Bosses, on the hunt for any reason to fire union members who make waves, termed their refusal insubordination. Bob Cullen, a Local 1298 vice president, said sympathetic managers have warned the union the company is looking to use discipline to fire 10 to 20 percent of workers by year’s end.

So in some garages, where line workers, splicers, and techs gather, members chose workers with spotless records to wear the shirts. Others wore buttons in solidarity.

CWA notes that the AT&T contract has no language about uniform or dress code, and members nationwide wear red union shirts every Thursday—a long-standing tradition to show union presence on the job.

Local 1298 said the suspensions were arbitrary, and that a grievance is in the works. Pete Mazzadra, a cable repairman and chief steward in the local, said the day’s suspension cost workers between $250 and $300. The company announced that the next time, suspension would be three days’ long, and a third incident could warrant termination.

Techs say the shirts give them a chance to vent their frustrations at a company that’s used the fear produced by the economic crisis, and a contract expired since April, to crack down on members, especially union activists and better-paid, more-senior workers.

“They’re holding us hostage,” Coling said. “They’re going for immediate suspensions for stuff that normally would warrant a verbal or written warning, they keep blowing off dates for grievance meetings, and they’ve been sitting at the table not addressing our major issues. It’s unacceptable.”

Local 1298 President Bill Henderson says the dividing line in bargaining has been retention of work in Connecticut. AT&T has shifted 1,200 jobs west and south, he said, damaging customer service.

That problem hasn’t surfaced in other parts of the regionally negotiated contract, allowing other CWA districts to settle their portion more quickly. Those districts acknowledged health care costs would climb for members, but argued that wage gains and tax-advantaged health savings accounts would make up for it.

Less-touted is the fact that the company will now pay only half of health care costs for new hires, when they eventually retire.

Now that contracts covering about half of the 110,000 CWA members at AT&T nationwide have been ratified, the union’s strike weapon at the country's largest unionized employer has been effectively dulled.

Short grievance strikes, which have been used elsewhere in the country, could still be used.

With hundreds of fresh grievances on its hands, Local 1298 has plenty of raw feeling among members to draw on for such an action.