Multi-Union Coalition at UC Strikes Back at Devastating Cuts 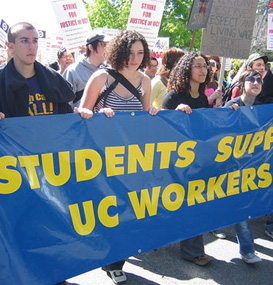 Students, faculty, and staff at the University of California's campuses walked out Thursday to protest hundreds of layoffs, cuts to academic programs and research centers, a staggering 32 percent tuition increase, and the stripping of any pretense of shared governance by placing “emergency” dictatorial powers in the university president's hands. Photo: andydr

Organizers called picket lines, rallies, and teach-ins on each of the 10 campuses to protest a wave of layoffs, tuition increases, and academic and research program cuts—all steps toward the decimation of public education in California.

Twelve thousand clerical workers organized by the Coalition of University Employees are also without a contract and made good on their pledge to honor UPTE’s picket lines. The UC Student Association issued a mid-September statement encouraging students to support the actions and join the walkout.

More support came from grad students, many of whom are members of the United Auto Workers and were notified of their rights to honor picket lines. Groups from the California State University campuses and from community colleges expressed support.

Layoffs and furloughs also threaten service workers in AFSCME Local 3299, whose members have joined student-worker coalitions statewide. The union rallied against poverty wages in a victorious (and lengthy) contract fight that ended in January and included walkouts and sit-ins.

In addition to layoffs, the university is now calling for furloughs of service workers that would effectively reverse the 4 percent wage gain they won for the first year of their new contract.

Over the past several months, opposition has been growing at UC to a fierce anti-worker campaign orchestrated by California Governor Arnold Schwarzenegger and the Board of Regents, in particular billionaire regent Richard Blum.

Through Yudof, the governor is using the economic slump and California’s budget crisis to lay off hundreds of staff and cut or eliminate academic programs and research centers, to increase tuition a staggering 32 percent, and to eliminate any pretense of shared governance by placing “emergency” dictatorial powers in Yudof’s hands.

Furloughs are hitting full-time faculty, too. More than 700 mostly non-union UC faculty members signed an open letter endorsing the walkout and explicitly supporting the UPTE-CWA strike, a roll-back of tuition hikes, and a return of shared governance—which Yudof suspended when declaring financial emergency.

Most of the giant pool of contingent faculty, members of the Teachers union (AFT), are hired on a semester-to-semester or yearly basis, and the school is putting hundreds on notice for next year.

“They may lose their jobs because of the budget cuts, but the university doesn’t count it as a layoff—they just call it a ‘non-reappointment,’” says Katherine Lee, a third-year lecturer in the college of writing, which is staffed entirely by contingent faculty.

Lee says the lecturer layoff will damage the quality of public education, as entire departments disappear. The lecturers’ contract bans sympathy strikes, so Lee and others planned in-class teach-ins on the budget fight.

There is no immediate financial crisis at UC. The system is no longer really a public university—the majority of its funding comes not from the state but from private corporations such as BP and from foundations. UC has a multibillion-dollar rainy-day fund, however, which it refuses to tap during lean times. This fund is several times as large as the state’s cuts to UC—but Yudof and the regents won’t use it.

Instead, they’re using the economic downturn and California’s budget crisis to make the university a more corporate-friendly, union-hostile place.

BP lined up to fund a new $500-million Energy Biosciences Institute at Berkeley in 2007 that gave it staggering intellectual-property rights for university-produced research. And in 2002, a huge pharmaceutical corporation, Novartis, was given the right to designate an unlimited number of its employees as adjunct professors at the UC Berkeley College of Natural Resources, giving it the ability to influence research there.

The actions on September 24 come out of many organizing streams that have converged over the past several weeks. Long before Yudof arrived, the various unions representing UC workers had organized a statewide coalition with local groups at several of the UC campuses.

In late summer, this coalition launched a campaign that included a vote of no confidence in Yudof, conducted from August 26 to September 2. Nearly 10,000 voted, and 96 percent voted “no confidence.” Since most campuses were not in session, the vote was primarily among UC workers.

On September 16, these unions took their cause to the regents’ meeting in San Francisco. Fourteen union activists were arrested for refusing to leave the regents’ meeting room. Speakers at the meeting spoke passionately about how layoffs, furloughs, and fee increases were devastating a great public university.

At Berkeley, the Student Worker Action Team and the UC Berkeley Solidarity Alliance have been in front. The Solidarity Alliance includes union members, lecturers, faculty, grad students, and undergrads. SA organized a noontime rally, as did students across the state, to support the UPTE strike and educate about alternatives for addressing the crisis.

Support is pouring in. But much more organizing will have to follow, and organizers are planning assemblies after the walkout to decide on next steps.

Indeed, in the week before the University of California, action groups at universities in Arizona, Michigan, and elsewhere organized solidarity events. A movement to defend public education may be finally taking root.

A version of this article appeared in Labor Notes #367, October 2009. Don't miss an issue, subscribe today.
Related
Strike Wave Rocks Britain, as Unions Confront the Cost-of-Living Crisis »
‘No Contract, No Matisse’: Philadelphia Museum of Art Workers Win First Contract After Strike »
The Right to Strike Is at Stake on the Railroads »
St. Louis Boeing Plant Workers to Strike »
‘A Loud, Magical Movement’: Strippers Fight for a Union »