Building a Union-Community Alliance that Lasts 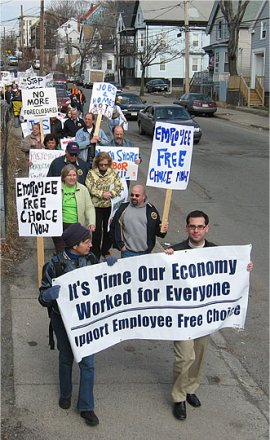 A march in Lynn, Massachusetts, for the Employee Free Choice Act and against the Bank of America’s home foreclosures helped build a relationship between unionized working people and community organizations, especially among immigrants. Photo: Bill Rouseville

Workers and homeowners, union members and community activists—all had a reason to march against Bank of America this spring. In Lynn, Massachusetts, our protest was another step in building the relationship between unionized working people and working-class community organizations, especially among immigrants. It’s a relationship that the North Shore Labor Council has been carefully nurturing for years.

The march brought together 300 union members and community allies, both to support “labor’s issue”—the Employee Free Choice Act (EFCA), which Bank of America has attacked—and to denounce the bank’s home foreclosures. Jobs with Justice had led 30 protests of Bank of America across the state, and our alliance in Lynn produced the largest and most diverse one.

People joined from the street in a mile-long march through a foreclosure-hit neighborhood adjacent to the downtown bank. Two community members gave unplanned testimony about the seizures of their homes by predatory lenders.

A city councilor who belongs to my union (IUE-CWA Local 201, the largest in the council) spoke about the impact of foreclosures on his neighborhood. A worker who had organized the local wastewater treatment plant spoke of management’s campaign of intimidation and firings.

The goal, in the words of council organizer Rosa Blumenfeld, was to reframe EFCA as a fight for the community and working people in general, not as a payback to a “special interest”—us, the unions. Boston television and the local Spanish-language papers covered the protest.

Lynn, an old mill town of 95,000 people 16 miles north of Boston, is the site of the longest continuous large-scale manufacturing in the United States. The shoe industry began here in the 1830s, overlapping in the 20th century with General Electric’s production of aircraft engines. GE still makes them here in a plant with more than 2,000 Local 201 members. The town is changing as it becomes home to Dominicans and Guatemalans, but also Russians, Africans, and Cambodians.

The rally was preceded by weeks of coalition meetings, where the common program of protest against foreclosures and for EFCA was worked out together. The lines separating us are not sharp: union members are losing homes and community members can see the benefit of organizing unions.

The roots of the alliance go back much further. Years ago the North Shore Labor Council made a strategic decision to build an alliance with community and faith-based groups. The Council wanted to tie together largely white union members and the fast-growing pro-union (but often non-union) immigrant communities. We took on practical work:

• A dozen years ago unions started a program to train new machinists, working with the Essex County Community Organization, a church- and temple-based coalition. While other job-training programs were shutting down, ours trained and placed some 180 machinists.

• Electoral and legislative work with a largely Latino voter empowerment group—housed at the Local 201 hall—led to strategy discussions on the electoral front. When the local Democratic Party didn’t support the Obama campaign early on, Local 201 opened its phone lines to the Lynn for Obama activists, and the close relationship has continued as the Obama group morphed into Lynn for Change after the campaign.

• Two years ago the school employees union, AFSCME Local 1736, lent critical leadership and an extraordinary member mobilization to the election of Maria Carrasco to the school board. White union members campaigned with her in white neighborhoods to give her easier access to their neighbors. Carrasco is the only person of color to hold an elected position in Lynn, which is only about half white. She has become a staunch voice for both the unions and Lynn’s communities of color, recently attending an AFL-CIO Central Labor Council training conference and chairing the Bank of America rally.

The Council sponsors occasional films and speakers, including a visit by progressive Senator Jorge Robledo from Colombia. Last summer 15 union and community leaders held a successful study group on corporate globalization (or neoliberalism). Bilingual readings and a popular education approach were used.

Union workers whose forefathers immigrated from Ireland and Italy described the Lynn that their parents or great-grandparents found upon arrival. Then immigrants from the Dominican Republic described what Lynn was like when they got there in recent decades. The discussion drew a sharp contrast between pre- and post-1980s Lynn. The negative impact of privatization, deregulation, free trade, and union-bashing on the lives of working people here was very clear.

The purpose was both to educate participants on what we are up against and to weld a closer unity among the leaders of the different working-class organizations, to better withstand inevitable stress between us in the future.

In the run-up to the Bank of America protest, it became clear that some older union members bought into the right-wing populist argument that poor workers—especially Blacks and Latinos—brought on the economic crisis by taking home loans they couldn’t afford. Their bumper stickers (“honk if I am paying your mortgage”) dot Lynn.

We take responsibility to challenge these ideas. We explain to members that financial firms packaging and reselling home loans changed the mortgage industry. We put on an education program by Labor Notes on the causes of the financial crisis: lax financial regulation, stagnant wages, huge corporate debt. Member Tom O’Shea wrote articles in the Local 201 News like “Why I Should Care about Someone Else’s Mortgage.” Nothing was swept under the rug. The resistance died down.

In a small council with limited resources, doing one thing means not doing something else. Less attention has been paid to municipal elections in other towns, and the Council’s activist base among more conservative local unions is not what it should be. We don’t accept these weaknesses as permanent.

In the short term, the right choices resulted in a successful protest. In the long term, we intend to redefine what the labor movement is all about.

Jeff Crosby is president of the North Shore Labor Council


Yes
Related
Auto Workers Turn a Corner for Strike Pay and Democracy »
Recent Books of Note for Labor Activists »
St. Louis Boeing Plant Workers to Strike »
Every Boss Has a Weak Spot. Find and Use It. »
What Can Unions Do Now to Defend Abortion Rights? »