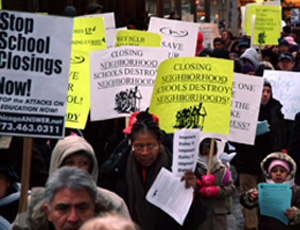 Parents joined teachers to protest another round of school closings in Chicago, announced in late January. photo: Jackson Potter.

As the CEO of Chicago Public Schools heads to Washington to run the nation’s schools policy, a new reform caucus of Chicago teachers is glad to see him go. But with their union in chaos, and city leaders hell-bent on privatizing schools, what’s a teacher to do?

The Caucus of Rank and File Educators formed this summer to fill that void. Frustrated with the union leadership’s inept response to Mayor Richard Daley’s privatization scheme, CORE and its community partners called a city-wide public hearing on the plan January 10, attended by more than 500 students, parents, community members, and teachers representing 81 schools.

The organizers are trying to head off a Board of Education announcement of 20 school closings and 12 “turnarounds,” a euphemism for school privatization that entails firing every teacher in a building and rehiring new staff.

One of the schools slated for closure under the plan—marketed as “Renaissance 2010”—is Peabody Elementary School, where three generations of Lillie Gonzalez’s family have attended.

“It’s a school that should not close,” she said. “We used to have 40 children in a class and now that we have 20 in a class they want to close it.”

Chicago’s school closings target poor neighborhoods temporarily drained of population as public housing is destroyed and residents are forced to move wherever they find landlords who accept housing vouchers.

The caucus is demanding that the board put a moratorium on school closings and turnarounds and shrink class sizes in neighborhood schools.

They want to strengthen Local School Councils, elected boards originally designed to give parents, community leaders, and teachers a role in allocating money and personnel at their schools. Since the mayor took control of the schools in 1995, the councils’ power over school budgets and hiring has been stripped.

Arne Duncan, now the Secretary of Education, left Chicago under a tattered flag. Since he was named schools CEO in 2001, he has presided over the largest destruction of public schools in Chicago’s history, closing almost 70 neighborhood schools.

Duncan has replaced shuttered neighborhood schools with non-union charter and contract operators that screen out low-income students and exclude children with disabilities, providing them with substandard services when they do admit them.

At one of the district’s flagship charter schools, Urban Prep, only 14 percent of the student body comes from the surrounding Englewood community. Charters have pushed out students with disciplinary records and youth whose first language is not English or whose parents are not active in the community.

Tyrone Jones’s academic struggles at Perspectives Charter School in 2007 were enough for the school to expel him. Perspectives had created a rule just before the start of the school year allowing the administration to remove students who failed to maintain a 2.0 average for two academic terms.

Jones’s mother, LaTanya, attributes her son’s fate to murky standards at charters, which allow children to be abandoned due to low grades.

“This is not ‘Survivor,’” Sharkey said.

As Chicago’s school district has become increasingly run by private contractors, the 31,000-strong Chicago Teachers Union, an AFT affiliate, has seen its rolls plunge by 6,000.

The CTU has been forced to scale back its budget to pay off a $2 million deficit. Union coffers had a $5 million surplus just four years ago.

CORE helped organize a protest at CTU headquarters during the summer that demanded the union “stop the crooks and open the books,” calling for a transparent, member-driven union.

“While teachers suffered from massive job cuts,” he said, “their leadership was not asleep at the wheel—they were joyriding.”

Charter schools bad. We need to invest in our public schools so that the injustices of "cherry picking" charter schools don't continue to undermine the necessity in having the "public good" of proper education be decietfully stolen from the public. We are underminded and decieved by charter schools because they only accept well to do students and point to their test scores as evidence that charter schools are better than public schools. This condition is the marketing plan of charter schools and simultaneously destroying our confidence and investment in the public school system. This is shameful and needs to be stopped. Not to mention the countless job losses of teachers and para-professionals in a time when our economy is in a recession. The divide between those who can make it and those who cannot only increases when we allow this race to the bottom to continue. All working people should be able to have a public school system that works so that all children have a fair chance at success.