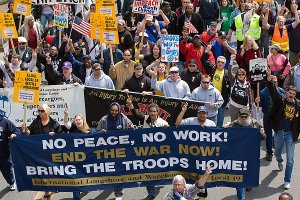 Thousands of dockworkers closed all 29 West Coast ports in a historic May Day protest against the Iraq war. Previous political actions by the union had been under provisions in its contract, making this the first major political strike by labor in decades.

The International Longshore and Warehouse Union (ILWU) represents 25,000 workers on West Coast docks and has the reputation for progressive leadership, democratic procedures, and international solidarity. It became in 1964 the first U.S. union to oppose the war in Vietnam, and during the 1980s it supported actions against El Salvador’s government and held a port protest against apartheid in South Africa.

More recently, ILWU Local 10 in San Francisco responded with financial and organizational solidarity when police attacked and arrested striking dockworkers in Charleston, South Carolina, in 2000. Several ILWU locals have also come to the aid of the five UAW local leaders who were fired by Freightliner last year (see page 4).

Apart from important, although limited, actions on social issues, recent decades have been relatively peaceful for the union’s longshore division. The steady increase in container traffic has made wage and benefit increases possible without the strikes and struggle that marked the founding of the ILWU and difficult decades that followed.

With the notable exception of a 10-day lock-out in 2002, the longshore workforce hasn’t participated in a coastal strike for several decades.

The ILWU Longshore Caucus jolted the union from its light slumber in mid-winter. The caucus consists of about 100 representatives elected by the rank and file from all ports under the union’s master contract with the employers who are represented by the Pacific Maritime Association. Caucus delegates met for two weeks at the end of January and early February, preparing for the July expiration of the union’s master contract with the PMA.

Toward the end of that meeting, a delegate moved a resolution from Local 10 for a one-day shut down on May 1. The “No Peace No Work” holiday, it said, would “demand an immediate end to the war and occupation.” To the surprise of some observers, the resolution received substantial support, including from a few Vietnam veterans among the delegates who felt it was time to take action.

At the end of the discussion, the motion was modified to an eight-hour “stop-work” meeting during the day shift. It passed without dissent.

The stop-work provision in the ILWU contract allows the union to hold monthly “stop-work” meetings for training and other issues. The provision had been used previously for actions such as to support death row inmate Mumia Abu-Jamal. Many delegates probably thought the anti-Iraq war protest could also be held under cover of the contract.

But the contract provision requires the PMA to agree to any stop-work meetings during the afternoon shift. In February, ILWU President Bob McEllrath sent a letter to the PMA notifying employers of the caucus decision to hold stop work meetings on May 1. The PMA wouldn’t have it, and denied permission for day-shift meetings.

The refusal forced a series of difficult decisions on the ILWU. Some members opposed the action because they supported the war, opposed union involvement in social issues, or worried about the potential negative impact on bargaining. Others pointed to concerns about losing a day’s pay, or the inability of a work stoppage to really end the war. Added to this were concerns about possible penalties for violating the contract. The union grappled with these issues at all levels.

In Local 10 there was strong membership support for the May Day action. There was also concern that “steadymen”—a growing proportion of ILWU dockworkers who report directly to employers instead of being dispatched daily through the hiring hall—would be subject to greater employer pressure to resist a work stoppage.

In the end, maintaining unity and solidarity carried the day. Union leaders backed the May Day action. Both rank-and-file members and local leaders understood the importance of demonstrating unity especially with the contract coming up for negotiation.

Leaders announced that the union was withdrawing its request for the stop-work meetings, then issued a statement, announcing that members were “standing down at West Coast ports” to exercise their “First Amendment rights by taking the day off work and calling for an end to the war in Iraq.”

In effect, the union was saying that it supported the membership’s position against the war, and backed their right and responsibility to protest the war, but the final decision to refuse work on May Day would be on an individual basis—and not a concerted action by the union itself.

Rank-and-file activists did not wait for the legal issues to be resolved. They publicized the resolution on independent websites, a move that violated ILWU’s practice of not disclosing resolutions adopted at the caucus meetings. They wrote columns, spread the message on the web, and asked for support from other unions and groups. They organized marches and rallies to provide anti-war content and amplify the stop-work action. Some made efforts to coordinate with immigrants rights actions previously planned for May Day.

“The message was out there—come stand up with the rest of us and declare that this war is wrong,” said Kevin Schroeder of ILWU Local 63 in San Pedro, California. “The membership [voted] with their conscience.”

A number of tactical issues had to be worked out. Under the contract, stop-work meetings did not include passenger ships or military cargo. But since the work refusal was not contractual to begin with, should members take work assignments on May Day in these areas? Differences were debated, and the consensus seemed to move toward allowing this work, if any, in order to make the political point that the protest was not aimed at cruise passengers or the troops, but against the war itself.

As rank-and-file organizing for the stoppage increased in some locals and became more public, the PMA finally got the coast arbitrator, whose dispute-resolving position the PMA contract provides for, to rule April 30 that the ILWU must tell members to report to work the next day.

But when May Day arrived, the work stoppage was complete. All ports under an ILWU contract shut down. Demonstrations in Seattle, Portland, and San Francisco were large for the middle of a weekday, drawing other union members and community supporters.

In San Francisco, the Local 10 drill team and hundreds of ILWU members led a march down the historic waterfront with banners declaring “No Peace No Work.” Estimates of the San Francisco crowd, which peaked at a waterfront rally, ranged from 1,500 to 3,000. In the Seattle-Tacoma area, Jobs with Justice organized support for the march. In Portland, dockworkers placed 800 carnations in the Willamette River to commemorate U.S. deaths in the war.

The legal battle is not over yet. The PMA could sue for violating the contract, alleging damages to the industry, and defying an arbitrator’s ruling. Employers might want to seek retribution, or try to use a lawsuit as a pressure tactic in the ongoing negotiations.

Related
Arab Labor Leaders Ask U.S. Workers to Oppose Bombing Syria »
Growing Labor Support for Palestine Faces Stiff Opposition in the U.S. »
Interview: In Iran, Labor Activists Face Repression »
More Troops to War, Few Dollars for Jobs. What’s Wrong with This Picture? »
"Why Are We in Afghanistan?" Debuts at US Labor Against the War Conference »