Millions March for Immigrant Rights; Virtual Strike in Some Cities 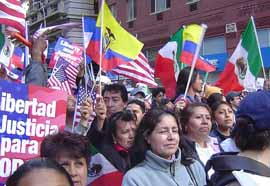 Millions of Latino immigrant workers throughout the United States marched and rallied in March and April to oppose repressive immigration legislation in Congress and to demand just immigration reform.

The immigrant demonstrations were largest in Los Angeles, Chicago, Dallas, and New York, but there were demonstrations from coast to coast and throughout the Midwest and the South.

When rallies took place on weekdays, as on April 10, the protests became virtual strikes in some cities as businesses experienced “A Day without a Mexican.” Turnout for the nationwide demonstrations on April 10 was estimated at over 2 million in 140 different cities.

The April demonstrations also quickly became more political, in some places taking up the slogan, “Today we March, Tomorrow we Vote.”

While Mexican immigrants and Mexican Americans were often at the center of this movement, being the oldest and largest Latino communities in the United States, Latinos from every Latin American nation were present in huge numbers: Central American, South American, and Caribbean. In a number of cities the mostly Latino demonstrations were joined by other groups: Irish, Chinese, African.

All of the demonstrations were peaceful, powerful expressions of immigrant pride.

Over the course of a month the demonstrations became magnificent expressions of immigrant communities and culture.

Whole families, neighborhoods, churches, workplaces, and unions rallied to express their desire to be able to live and work in the U.S. without fear of arrest, deportation, and the breaking up of their families. Immigrants held up signs saying, “We Are Not Criminals.”

Everywhere in their speeches community leaders, union officials, priests, and students emphasized the economic, social, and cultural traditions made by immigrants.

The immigrants quickly responded to criticism that carrying their national flags—from Mexico, El Salvador, Guatemala, etc.—suggested they were not loyal to the United States and began waving the American flag instead.

Students also participated in the movement, walking out of schools in many cities throughout the country. Student strikes in Los Angeles, San Diego, and California’s Central Valley involved tens of thousands of students.

The key institutions behind the marches have been the Catholic Church, labor unions, some national Latino organizations, Spanish-language TV and radio announcers, and, most importantly, informal networks of Latino activists.

Mostly it has been immigrant workers themselves who have propelled this movement. While the Catholic Church is a powerful and conservative institution, the church also leads hundreds of Spanish-language congregations with millions of Latino parishioners and oversees scores of social service centers for Latino immigrants.

The church turned its enormous resources to support for the immigrant protests. Soon the Latino Protestant churches also became involved in supporting the protests.

The most important national Latino organizations, such as the National Council of La Raza and League of United Latin American Citizens (LULAC), generally focused on legislation and lobbying. They urged their members to make phone calls, send cards and letters, and participate in citizen lobbying efforts.

However, it was regional, local, and ad hoc coalitions that came together to organize most of the rallies and put power in the streets. In Ohio, for example, four local organizations—CODEDI, the Farm Labor Organizing Committee (FLOC), Miguate, and the Immigrant Worker Project—came together in early March to create the Ohio Immigrant Network (RIO).

RIO then called for a state-wide protest in Columbus on March 26 that involved 7,000 people, the largest Latino rally in the state’s history. The rally was 99 percent Latino with only a handful of white and African American supporters.

The U.S. labor movement did not provide immigrants the powerful, organized support that it might have.

Whether or not unions have proved capable of playing a significant role in the immigrant movement, this is an overwhelmingly working class movement whose base is made up of restaurant and hotel workers, farm workers, and construction workers.

NEXT ROUND: MAY DAY

As Labor Notes goes to press, the Mexican American Political Association and other Latino organizations have called for a nationwide boycott and strike on Monday, May 1-- International Labor Day. Many national organizations decline to call for a strike, but will organize protests.

Whether they will next raise the slogan, “Today our rights, tomorrow our raises,” remains to be seen. Certainly what has been demonstrated is that should the immigrants fight for unions, contracts, wages, and benefits as they are fighting for the rights to residency and citizenship, they could quickly revitalize the labor movement and transform American society and politics.

Dan La Botz is a member of the Coalition for the Rights and Dignity of Immigrants in Cincinnati. He is the author of several book on workers in Mexico, Indonesia, and the United States. His most recent book is Cesar Chavez and La Causa.