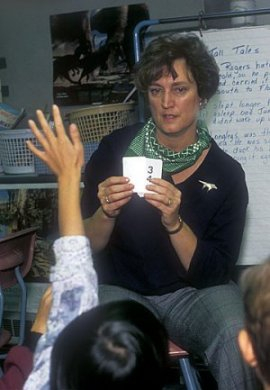 Teachers in large school districts across the country are facing scripted programs, which mandate even the hand gestures to make while teaching. Photo: Jim West

"When I stand in the hallway, I should be able to hear all fourth grade teachers saying the same thing. Do not deviate from the scripted program and do not fall behind in the pacing plan.” The “program” this principal was referring to was Open Court, Los Angeles’s mandated reading curriculum.

The latest attack on public education has come in forms that are familiar to many workers: deskilling, speed-up, top-down mandates, and intense control by superiors over most aspects of working conditions.

Open Court, designed by SRA/McGraw Hill, is like many of the curricula now being adopted by large school districts across the country. Its foundation is daily agendas or pacing plans, periodic tests whose results are compared across schools, and a literal script to teach phonics-based reading.

Two hours of script a day leaves little time for creativity or individualized instruction, let alone time for art, physical education, or social studies. According to our administration, local school district, and state, deviation from the program is grounds for discipline.

The enforced reading curricula are scripting everything that happens in the classroom, right down to instructions on the appropriate hand gestures to make while teaching. They are linked to periodic assessments (at the elementary level, the time spent administering mandated local and state tests adds up to two full months of testing per year) and pacing plans developed in corporate boardrooms with rubber-stamp approval by school districts.

Scripted programs are being put into place as quickly as school districts and state education boards can get them approved, despite research that shows programs like Open Court not only are ineffective but also have a negative impact on comprehension skills.

I’m a sixth grade teacher in the Los Angeles Unified School District, the second largest school district in the country, and my average class size is 34 students, mostly low-income and English-language-learners. I asked a student in a kindergarten class to give me a word that started with P. He responded, “popcorn”—the word given in the Open Court reader. A query for another was greeted with a blank stare. “What about ‘Pablo’?” I asked—“your name.”

Mandated programs have pressured teachers to teach more and more material in the same amount of time—the exact opposite of what has been proven effective for students’ learning.

Pacing plans have meant that students barely touch on many subjects, with students expected to remember a few related facts that will be on the test.

Teachers have no input into the process, let alone students or parents. Nor do they have any choice: once the programs are selected by the district or state, individual teachers must teach the programs.

What is behind these mandates? Teachers have been scapegoated for problems in our schools, leading politicians to want to “teacher-proof” education. As one scripted-program trainer said, “Anybody should be able to walk into a classroom and, knowing the page, start teaching.”

This type of de-skilling affects job security and divides new teachers from veteran teachers who have developed teaching strategies of their own. Opportunities for workplace collaboration are squelched.

For students the effects are equally intense. The elimination of critical thinking and the homogenization of knowledge are cloaked in egalitarian rhetoric. Program content is often racist and class-biased, and always stifling.

In St. Louis, sections of the Open Court reading curriculum have been pulled due to parent complaints about racist content, specifically, a short story entitled “Hip.” The story’s main character—a tap-dancing, thieving monkey named Hip—is paired with an African-American couple. One parent complained that it was sometimes difficult to tell whether the story’s narrator was referring to the couple or to the monkey.

Resistance to mandated programs and other de-skilling initiatives is possible; individual teachers do it every day in their classrooms. To beat them, however, collective effort is critical. Teachers and education advocates in New York have rejected these programs, and they are being debated in Ohio and Oregon.

Unfortunately, teachers’ unions have been removed from the picture, since school curriculum is not part of traditional bargaining packages. For many teachers unions, struggling outside of normal contractual boundaries is just as inconceivable as building real coalitions with parents, students, and other school employees’ unions.

Their weakness is further demonstrated when they stand aside as teachers struggle alone, and the union leadership says there is nothing they can do about it because it’s not in the contract.

Thus, where unions have not gotten fully on board with districts to accept and enforce the programs, they have often simply been run over.

In Los Angeles, teachers are organizing to push their union, United Teachers Los Angeles, to take a strong stand against the pacing plans and assessments. Progressive Educators for Action—a reform caucus in the union—has been using the upcoming city-wide union election to organize opposition to the programs.

One tool we’re using is a petition that, with 500 signatures, will send a ballot referendum to every union member on pacing plans and related assessments. If a majority supports the referendum, it will put the union on record as opposing these programs and pressure union leaders to organize against them.

It is not enough to get rid of these scripted programs and their accompanying assessments and pacing plans. Getting rid of them would not touch the real problems of education, which include pervasive overcrowding and underfunding, lack of resources, high teacher turnover, and weak training and support programs. These problems have been beating down teachers and students for decades.

This is the real road to an educational system where teachers have the freedom to focus on helping students reach their full creative and intellectual capacities.

Molly Sides is a member of United Teachers Los Angeles.