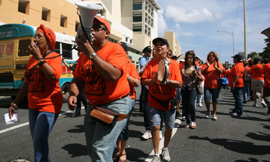 Governor Luis Fortuño announced in late September that nearly 17,000 public employees in Puerto Rico will lose their jobs by November, in addition to the nearly 8,000 laid off over the summer. The layoffs in total would reduce the public workforce by about 12 percent.

Governor Luis Fortuño announced in late September that nearly 17,000 public employees in Puerto Rico will lose their jobs by November, in addition to the nearly 8,000 laid off over the summer.

The layoffs in total would reduce the public workforce by about 12 percent.

The government claims the massive layoffs, authorized by a notorious law that tramples on workers’ rights, are necessary to offset a huge budget deficit, estimated at $3.2 billion.

Approved in March, Law 7 authorizes the government to bypass both collective bargaining and existing labor laws that bar the unjustified firing of public employees. Additional measures provide for “Public-Private Alliances,” which open the door to outsource public services to private entities.

Critics say the layoffs, together with unprecedented budget cuts, will have a devastating impact on workers and their families—in addition to crippling many government agencies, including those that provide basic services and serve vulnerable groups, such as battered women and the elderly.

Despite the approximately 15,000 marching with the labor movement on May 1, before the first wave of layoffs, the union response to the latest announcement has been slow and fragmented. Talk of a 24-hour national work stoppage, however, is growing.

Protest actions over the summer were virtually nonexistent. The success of the May Day march and rally was due in large part to simultaneous work stoppages by five of the island’s independent public sector unions, including the Federation of Teachers (FMPR), which was the cornerstone of that mobilization. The AFL-CIO and Change to Win unions, however, refused to walk out that morning, opting instead to rally at the Department of Labor in the afternoon, with a much poorer turnout, about 5,000.

AFL-CIO and CTW unions had lost prestige and drawing power among their members by supporting an unpopular sales tax imposed by the previous administration. (They also weren’t aided by their longstanding undemocratic practices.)

The unions also supported the previous administration’s unsuccessful attempt to crush the FMPR during the teachers’ strike of February 2008. SEIU affiliates led the charge, in a catastrophic raid attempt on the FMPR that squandered millions of dues dollars.

An organizing coalition controlled by the AFL-CIO and CTW unions held a much-publicized “People’s Assembly” on June 5, which drew community, feminist, environmental, cultural, and other groups aggrieved by the administration’s policies, as well as opposition political parties and most of the island’s unions.

Announcement of the additional 17,000 layoffs sparked a smattering of increasingly militant but localized protests, propelled in part by rank-and-file pressure. Key among these was students’ 24-hour solidarity strike at the University of Puerto Rico's main campus on September 29. Many calls for a general strike have been voiced, although little preparation is yet evident. The atmosphere on the island is one of improvisation, and conditions are changing by the second.

A 24-hour national work stoppage, slated for October 15, has been supported by several unions, including the FMPR.

The governor has taken the militant attitude seriously. He authorized Police Chief José Figueroa Sancha to activate the National Guard against civilians in case of “grave alterations of public order.” Sancha was second in command of the FBI in Puerto Rico in 2005, when an FBI raid resulted in the killing of pro-independence leader Filiberto Ojeda Ríos.