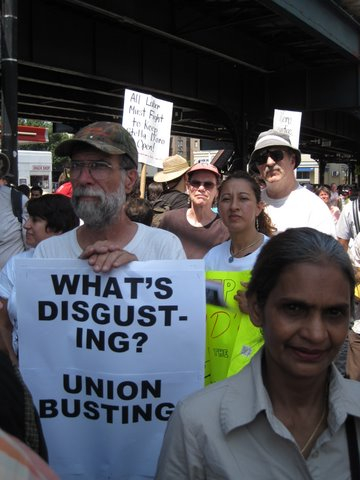 Two months after returning to their jobs on the heels of a victorious 11-month strike, workers at the Bronx-based Stella D’oro cookie plant are fighting to keep their factory open. They and supporters are urging the city to use eminent domain to take over the factory and stem the loss of good manufacturing jobs. Photo: Edwin Chungo Molina.

Two months after returning to their jobs on the heels of a victorious 11-month strike against deep concession demands, the defiant workers at the Bronx-based Stella D’oro Biscuit Co. are at it again. This time, however, they are not walking out of their plant—they are trying to stay in it.

On Wednesday, the company’s union-busting owner, the private equity firm Brynwood Partners, said it had reached a deal to sell Stella D’oro, and that production will be relocated to Ohio by early October.

If successful, the move will leave the plant’s 136 union workers out on the street. But the workers, long aware that Brynwood Partners might try to shut down the facility, say they have come too far to leave without a final fight.

And they are not alone. While management was meeting with workers on Wednesday morning to break the news, community supporters—organized in the Stella D’oro Solidarity Committee—held an impromptu rally outside the plant gates. Workers and supporters will march together toward the front of this year’s Labor Day March on September 12 (a week later than the rest of the country, timed not to conflict with a Caribbean festival). The supporters will also hold a rally in Manhattan on September 25.

Brynwood Partners, which bought Stella D’oro from Kraft in 2006, has been itching to leave the bakery business ever since losing the workers’ 11-month strike there this summer.

The workers, members of Bakers (BCTGM) Local 50, walked off the job in August 2008 against massive concession demands, including a 26 percent cut to wages.

A stunning decision by the National Labor Relations Board, which found that Stella D’oro had bargained in bad faith, returned the strikers to work—with back pay and no concessions—in early July. The strikers had offered to return to their jobs under the terms of their old contract in May, but management, intent on breaking the union, had refused.

However, on the same day workers returned, Brynwood Partners announced its intention to shutter the plant in 90 days. Ninety days has not passed yet, but Brynwood Partners has made its move—making real its threat to close.

Fortunately, the workers at Stella D’oro and their allies have a demonstrated capacity to fight, and to break up deals they don’t like.

Lance, Inc., the North Carolina-based food manufacturer that plans to buy the company, has been down this path before. Its first effort to buy Stella D’oro went bust earlier this year when workers and supporters picketed Goldman Sachs, one of Lance’s high-profile investors. The action drew media coverage from "Fox Business News," and apparently the prospect of militant workers badmouthing the company on national television was too much for Lance, which has tried to cultivate a reputation as a kind, if paternalistic (and non-union) employer.

With a little bit of luck—and a lot of good organizing—the workers at Stella D’oro just might be able to force Lance’s hand again.

But what strategy do the workers have to go on the offensive? In the absence of a union-friendly buyer, some supporters have floated the idea that the workers could form a co-operative and buy the plant themselves, a suggestion echoed by the union’s lawyer.

Peter Ranis, professor emeritus at the CUNY Graduate Center, has taken this line of thinking one step further. In a recent article in the local Indypendent paper, Ranis, who has written extensively on the recuperated factory movement in Argentina, argued that the workers should call on the city to use the power of eminent domain to expropriate the plant with compensation and turn it over to them to run. The workers would then pay the city back over time, Ranis says.

If successful, the effort would be the first of its kind in this country, and would demonstrate that although eminent domain is typically used in the interest of private development, it is a tool that can also be used by labor to stem the flow of factory closures and job losses.

Political leaders already have shown sympathy, at least on paper: The City Council in July passed a resolution supporting the workers.

Taking the factory may be a long shot, but so was winning the strike. In a campaign as unlikely as Stella D’oro, anything can happen.