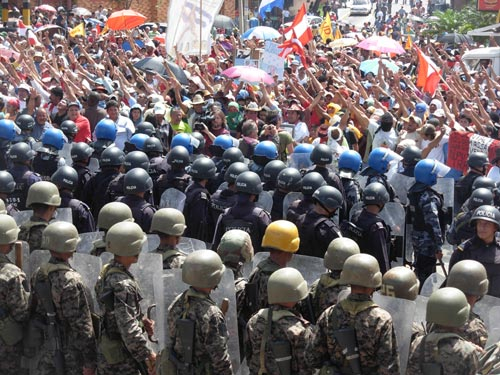 Thousands marched from the countryside to join a rally August 11 against the coup in Honduras. They used the soft drink workers' union hall as a staging ground, just one example of the unions' key role in opposing the forcible ouster of Honduran President Manuel Zelaya.

In the early hours of the morning on June 28, the Honduran military shot off the locks on the back entrance to President Manuel Zelaya’s home in Tegucigalpa, dragged him out of bed, and whisked him out of the country in his pajamas.

The National Congress quickly installed its president, Roberto Micheletti, a political rival of Zelaya, as the new president.

Not one nation on earth has recognized the new government.

I visited Honduras in mid-August on a tour to investigate the human rights situation since the coup. Almost immediately our small delegation found ourselves right in the lap of the labor movement. When we walked into the headquarters of STIBYS, the Bottling Plant Union, we also entered a meeting place for the National Front Against the Coup.

The large assembly hall was being used for rallies and sleeping space for some of the thousands who had marched to Tegucigalpa, the capital, from distant towns and farms to join the daily demonstrations and the mass convergence on August 11.

“This is a struggle to bring dignity to Honduras,” said Israel Salinas, leader of the United Confederation of Honduran Workers.

The president of STIBYS, Carlos H. Reyes, was in the hospital with multiple fractures of his right hand due to an attack by the army and police at a demonstration. Reyes is an independent candidate for president in the November elections and is given a real shot at winning—if the elections are honest. (Term limits prevent Zelaya from running again).

Our group was briefed by a succession of labor and peasant leaders. They told us that the justification the coup leaders gave for their forceful takeover was false. The military says Zelaya violated the constitution by proposing to change it so he could run for office again. Actually, Zelaya had proposed a non-binding opinion poll of the citizens that was to have taken place on June 28. It would have asked whether they supported placing a constitutional assembly on the November 29 ballot. By the time such an assembly would have taken place, Zelaya would have already left office, his term over.

It appeared that most of the leaders we talked to, unionists and peasant leaders, hadn’t even voted for Zelaya. But now they were demanding his return and facing arrest and police violence to do so. Why would they care to defend a president from an elite party, who inherited wealth and made even more as a rancher and lumber baron?

“Zelaya supported a proposal to require that the union contract follow outsourced work,” said Porfirio Ponce of STIBYS, whose members work at Coke, Pepsi, and InBev. Like thousands of Honduran workers, they face being turned into temps for subcontractors.

Zelaya also decreed a 60 percent increase to the country’s miniscule minimum wage on January 1, after three-way negotiations for an increase broke down because employers wanted a wage freeze. (The new urban and public sector minimum is $289 a month. Rural workers’ minimum is $213, and maquiladora workers were supposed to negotiate their increase, but it never happened. Labor had proposed $326 for urban workers, which they calculate is the cost of basic staple foods.)

“The people who promoted the coup were against the minimum wage increase,” Ponce said. He fears the coup leaders will roll it back. “Our members make well above the minimum,” he continued, “and we get a hearing with the union present if they want to fire someone. The threat to us and other union workers is outsourcing. Then they don’t have to even pay the minimum wage if you’re not a regular employee.”

He cited what’s happened to the banana workers union, which formerly had 22,000 members and now has only 2,000 because of a scam that turns workers into a kind of sharecropper on small parcels of banana groves.

One of the leaders of the National Front Against the Coup is Rafael Alegria, the Central American coordinator of Via Campesina, an international movement of peasants and agricultural workers.

Alegria said that in the last two years Zelaya had negotiated agrarian reforms and stopped the privatization of the ports and airports and many public services.

“This really angered the business class,” he said.

Even worse, under Zelaya Honduras joined ALBA—the Bolivarian Alternative, an international alliance initiated as an alternative to the U.S.-sponsored Free Trade Area of the Americas. It includes Venezuela, Cuba, Dominica, Bolivia, and Nicaragua. Micheletti, the coup leader, and big business created a storm against ALBA.

Joining it meant that Honduras could pay 60 percent of the regular price of petroleum bought from Venezuela if the government put another 40 percent into a national development fund. That step freed up $50 million for the agricultural sector. Alegria said the government also got a $100 million loan for small business development, aid from Cuba and Venezuela to eradicate illiteracy, and aid for cataract operations, plus scholarships for students to study in those two countries.

According to Alegria, the last straw for the business class was Zelaya’s proposal to consult with the people on constitutional reform. “The oligarchy,” he said, “which is only 10 families who control this country plus the reactionary sectors of the two major parties, went to the military and said ‘we’re on the verge of communist takeover.’”

Of course, Alegria sees it differently. “This is a coup against all the people of Latin America. . .If we allow it to succeed here, other countries are in grave danger,” he said.

Juan Barahona, another leader of the Front, emphasizes that the coup leaders depend on the support of the United States and would fall immediately if the U.S. would withdraw it. He notes that in the 1980s the U.S. installed a military base in Honduras to aid the contras who were trying to overthrow the government of Nicaragua. The walls of a local human rights organization are filled with photos of the tortured and disappeared of that era.

These leaders’ thoughts are echoed in the growing resistance across the country. There are ongoing strikes of health care workers, many teachers have been striking two or three days a week, and coup leaders can’t get control of their own ministries of health or education.

Tens of thousands of people in Tegucigalpa and San Pedro Sula, the country’s second-biggest city, came out August 11 for mass demonstrations. People had been marching for up to eight days from remote towns and villages to converge on that date.

In Sabana Grande, over an hour’s drive northeast from Tegucigalpa, a few days before, I met a teacher on the march. Once Zelaya made school registration free, he said, the number of students in school rose significantly. He said Zelaya also added teachers and gave many public employees a raise. He was marching and striking to show solidarity with the real government, and added that about 80 percent of teachers were on strike.

A telephone worker from Choluteca who was fired from his job because he opposed the coup told me, “We are conscious that this is a president who is with us, with the poor people. If we didn’t appreciate this we would be in our houses, but we do appreciate it, and that’s why we’re in the streets.”

Honduran workers and citizens are facing serious and escalating violations of their human rights. So far the deaths of at least 10 people at the hands of the government have been confirmed. Thousands more have been beaten and arrested, or disappeared. For more information and suggestions for how you can help, download the delegation’s report at www.crossbordernetwork.org.

Judy Ancel is a labor educator at the University of Missouri-Kansas City.