Employee Stock Ownership, But Not Control 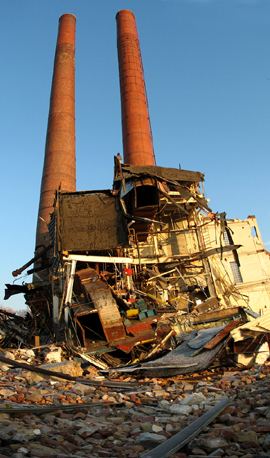 The UAW's health care trust appointees may control sizable stakes in GM and Chrysler, but preventing more factories from ending up like this old Canadian GM plant will be hard: Chrysler's agreement barred the union from using its stock to exercise power. Photo: Rick Harris.

Like Chrysler before it, GM's bankruptcy looks to hand union appointees a big stake in the company, leaving many asking, shouldn’t union workers rejoice, since they’re running the shop now?

They’re not: the Chrysler agreement barred the union from exercising power.

Where union workers have taken big ownership of their company’s stock, experience suggests it doesn’t allow them much leeway in steering the company. Take, for example, Ohio’s Weirton Steel.

Organized in an independent union, in 1984 its 8,000 workers liquidated their strike fund and took 20 percent wage cuts, trading them for full ownership of company stock. It was at the time the nation’s largest employee stock ownership plan, or ESOP.

The plans promised workers a “say” in running the company in exchange for wage and benefit cuts, and were heralded by union leaders as a way to save U.S. manufacturing. Weirton’s ESOP put three union reps on the 13-member board.

Of course, worker ownership is no safeguard against the twist and turns of the market. Steel prices crashed, and Weirton’s managers—who still retained full management rights—continued to give themselves healthy raises, profit sharing, and other plums.

Two-thirds of workers were laid off, the company entered bankruptcy in 2003, and surviving “worker-owners” saw their stock evaporate, and along with it their health care and pensions.

Chris Mackin, who advises unions on employee stock ownership plans, argues that most of the nation’s 11,000 ESOP plans have succeeded at preserving jobs that otherwise would have disappeared. He says ESOP companies average 125 workers, and just 5 percent are unionized.

Mackin notes they work best in healthy companies with owners who seek to retire but have no clear successor, and says their track record in distressed unionized firms is not so hot.

Union control of company policy through stock ownership plans is weak. A study from the New York Federal Reserve said less than 3 percent of plans give unions a majority stake.

See also:   Getting Detroit Back to Work

And: Auto Workers Taken for a Ride

MORE THAN A ‘SAY’

Rather than settle for vague “representation” on the company’s board, at least one ESOP focused on bolstering the union’s role at the workplace. At Algoma Steel in Sault Ste. Marie, Ontario, Steelworkers used their majority stake to bargain a co-management system in the early 1990s that gave power to shop floor committees.

“It’s almost impossible to have co-ownership without having the union co-opted at some level,” DaPrat said. “It’s a fool’s game. It’s taken over six years to fight back.”

Other unions see more promise in alternative ownership forms, and are trying a variety of methods. Primary among them is the Newspaper Guild, an affiliate of the Communications Workers.

With major daily newspapers across the country running to bankruptcy courts and threatening to close their doors, the Guild has helped reporters at the failed San Juan Star in Puerto Rico set up a co-operative newspaper, and negotiated wage cuts for members in Maine in exchange for a 15 percent stake in the state’s largest paper.

To make an ESOP work, “these corporate owners have to eat a lot of their debt,” said Guild President Bernie Lunzer. “We could create something on the other side with real worker involvement to help with the business model. We’re telling members, take your fate into your hands, because these management people don’t know what they’re doing.”

Randy Furst, a Guild member and reporter at the bankrupt Minneapolis Star-Tribune, said the union should focus on standing firm with other unions against employers—and push for sustainable mechanisms to support newsgathering.

“Most workers cannot afford to put their meager life savings into an operation,” Furst said. “We should consider funding them in some nationalized form, something like the BBC in Great Britain.”

The failures of ESOPs spawned by the 1980s recession suggest they’re not the best model for unions, said Charley Richardson, a retired labor educator at University of Massachusetts at Lowell.

“Is employee stock ownership a strategy for building the labor movement that’s going to change the world? Not a chance,” he said. “It might save jobs for a while in some cases, but it tends to make members narrowly focused on ‘their’ company and their company’s stock. It separates them from other workers in other companies. And at the end of the day, stock ownership rarely carries the collective power that workers get from building a strong and independent union.”