Unions Should Break With Managed Care 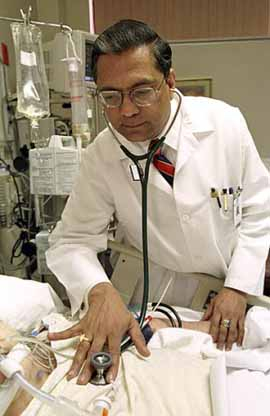 Despite solid evidence that turning Medicare and Medicaid over to HMOs raises the costs of these programs and damages quality of care, both Republicans and Democrats continue to support the further privatization of both programs. Photo: Jim West.

During the 1980s and ‘90s, cost-control tactics pioneered by HMOs spread throughout the entire health insurance industry. Those tactics, known collectively as “managed care,” were applied by the insurance industry first to employees of large-employers, and then to small-employers.

Even though it has been obvious since the mid-1990s that managed care has failed to cut costs or improve quality of care for private-sector employees, the insurance industry is attempting to take over the last islands of unmanaged medicine – the nation’s Medicare and Medicaid programs. They argue that managed care is just the ticket for what allegedly ails these programs, and their arguments are succeeding. About half of all Medicaid recipients, and at least 13 percent of Medicare recipients, are in HMOs, and the percents grow every year.

The AFL-CIO helped create this mess. It did so by endorsing the concept of the “health maintenance organization” when it was first proposed by Richard Nixon in 1971, and, over the ensuing decades, by repeatedly endorsing the diagnosis of the health care crisis promoted by HMO advocates (namely, that doctors order too many services and someone has to do the dirty work of telling doctors and patients no).

The Nixon administration concocted the phrase “health maintenance organization” in February 1970. In March 1970, the administration announced that this new-fangled form of insurance would be the centerpiece of Nixon’s health policy. With the critical support of the AFL-CIO, Nixon’s proposal, known as the HMO Act, became law in 1973. This is the law that created the planet’s first HMO industry. The HMO Act subsidized the formation of HMOs and required employers with more than 24 employees to offer an HMO to their employees if an HMO existed in their area.

The definition of an HMO in the 1973 law was extraordinarily vague. Informally, experts said then, and say now, that an HMO is an insurance company which uses managed care tools – financial incentives to get doctors to deny care and second-guessing of doctors if the financial incentives don’t work – and which imposes restrictions on choice of doctor. HMOs limit choice of doctor because that enhances the power of managed-care tools (doctors with higher proportions of their patients insured by an HMO are more likely to cooperate with the HMO).

Because Democrats controlled Congress at the time, Nixon obviously needed considerable Democratic support to get his HMO Act passed. He got it, in part because the AFL-CIO was so enthusiastic about HMOs. Democrats such as Senators Ted Kennedy, Walter Mondale, and Warren Magnuson, and Representatives Wilbur Mills and Paul Rogers, all lent their names to HMO legislation introduced during the 1971-73 period.

In testimony presented to the Senate Subcommittee on Health on October 5, 1971, the AFL-CIO heaped lavish praise on HMOs. The testimony was presented by Andrew J. Biemiller, then director of the federation’s Department of Legislation. Biemiller, a former member of Congress himself, opened his testimony with this statement: “Let me say at the outset that the AFL-CIO has had differences … with this [the Nixon] Administration. However, we are in complete accord on the importance of utilizing public funds to stimulate the development of … Health Maintenance Organizations.”

Biemiller went on to say that HMOs “can provide better quality medical care at lower cost than the fragmented fee-for-service system” and that the savings HMOs could achieve were “enormous.” His only significant reservation about Nixon’s HMO bill was that it would have subsidized for-profit HMOs. But because there is no evidence that managed care is less toxic in the hands of nonprofit than for-profit HMOs, this reservation was of little significance.

At the time that Biemiller testified in favor of HMOs, there were only three dozen HMOs in existence in the country. In part because of AFL-CIO support, the 1973 HMO Act passed, and that in turn facilitated the takeover of the U.S. health insurance industry by managed care insurers.

Whereas there was no powerful industry promoting HMO propaganda in 1971, today there is, thanks in part to the AFL-CIO. Today, virtually the entire health insurance industry promotes managed care.

Today the insurance industry uses its great economic power to oppose single-payer legislation (which would drastically reduce the size and influence of the industry) and to support further privatization of Medicare and Medicaid. They support their arguments the same claim Andrew Biemiller presented in 1971 – that managed care is a necessary tool in the fight against health care inflation.

Despite solid evidence that turning Medicare and Medicaid over to HMOs raises the costs of these programs and damages quality of care, politicians of both parties continue to support the further privatization of both programs.

To give you some idea of how solid the data against privatization of Medicare and Medicaid are, consider just two studies. A 2003 study of California’s Medicaid program, which is partially privatized, by a University of Maryland economist concluded that privatization raised that program’s cost by 20 percent.

In a 1999 report to Congress, the U.S. General Accounting Office stated, “[N]umerous studies conducted by us … and others demonstrated that the Medicare program spent more on beneficiaries enrolled in health plans than it would have if the same individuals had been in FFS [‘fee for service,’ which refers to the traditional Medicare program].”

Unions do not wield as much influence with Democrats today as they did in 1971, but they remain a critical part of the Democratic base and could play a very important role in sharpening and strengthening Democratic health policy. The AFL-CIO could help the nation extract itself from this health care mess if it were to renounce its endorsement of managed care and undertake a campaign to roll back the privatization of Medicaid and Medicare.

It would be even more helpful if the federation would also endorse single-payer legislation that has been introduced every year in the U.S. House of Representatives since 1991. But the mere renunciation of the AFL-CIO’s longstanding support for managed care would be very helpful to the single-payer movement.

Kip Sullivan is the author of The Health Care Mess: How We Got Into It and How We’ll Get Out of It.

Related
Auto Workers Turn a Corner for Strike Pay and Democracy »
Recent Books of Note for Labor Activists »
St. Louis Boeing Plant Workers to Strike »
Every Boss Has a Weak Spot. Find and Use It. »
What Can Unions Do Now to Defend Abortion Rights? »