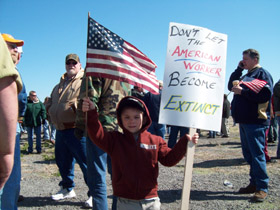 Steelworkers—and their families—rallied in Illinois against the use of Indian-made pipe for a oil pipeline. Photo: Doug May, USW Local 1899.

As a young man in Detroit, I could go from factory to factory putting in applications and get two or three calls the next day to report for work. I became a Steelworker at Great Lakes Steel Works in 1970—a wistful memory for me, and an urban myth for a 21-year-old today.

Real unemployment is at 18 percent in Michigan, and well over 20 percent in our abandoned industrial inner cities. Those in Washington are throwing a life preserver to the 15 percent of our economy based in banking and investment, and destroying the 70 percent driven by wages earned and spent.

What needs to be done is the direct opposite of more than 20 years of abandoning U.S. manufacturing for more profitable, lower-cost, highly polluting, exploitive, offshore production.

In the wreckage of this old economy, there is a vision of a new one worth fighting for. We need more workers, not less.

It is time for a new Social Industrial Revolution that rebuilds our roads and bridges with concrete and steel made in mills in our heartland. It is time to rebuild rail transport and new light-rail transportation. It is time that we rethink the automobile, and the auto plant. Auto workers could build light rail and other forms of public transit, as well as cars. The 2,200 Steelworkers on furlough at Great Lakes Works can produce tons of steel to build wind generator towers instead of metal to build cars.

This is why Steelworker activists are organizing support for a Buy American resolution. It commits cities, counties, and states that receive money from the February stimulus bill to use it to purchase products and services that are made in America, whenever possible.

As the resolution says, “Our taxpayer dollars should be spent to maximize the creation of American jobs and restoring the economic vitality of our communities.”

The bill has been introduced in more than 600 communities, with very little resistance from elected officials. We use talking points such as a University of Massachusetts study that found infrastructure investments could create as many as 18,000 jobs per $1 billion spent.

“Buy American” used to be code for attacks on Japanese, Chinese, or Mexican workers. But it isn’t the workers from these countries who move jobs offshore; it’s the owners and investors of the companies who have wrecked our economy, laid waste our communities, and shortchanged our hospitals and schools, while filling their own pockets.

We are not falling prey to the old arguments of division and hatred, but for a new economy that encourages solidarity with workers, across all borders.

The international solidarity work that the Steelworkers do—with endangered unionists in Colombia, with our union partner Unite in Britain, with Brazilians, and supporting Mexican copper miners from Los Mineros at Cananea—has made a difference. At a gut level we get it—and that is reflected in the ways our campaign is interpreted at all levels of the union.

When rank-and-file Steelworkers meet Mexican mineworkers, and demonstrate at their embassy to tell the government of Mexico to keep its hands off Los Mineros President Napoleon Urrutia Gomez, it makes it clearer for our members that our Buy American campaign does not attack Mexican, or Japanese or Chinese, workers. You can’t demonize foreign workers and support them at the same time.

People throughout the world need to support their local communities as they support other workers throughout the world. Just as “buying local” makes sense as an environmental rallying cry, it’s reasonable as a healthy approach to the world economy.
International employers are often pressured to be more responsible by unions there. So it only makes sense to develop global unionism.

We don’t say just “Buy American” but also “Manufacture American.” We focus on getting communities to support products that are produced locally. We don’t distinguish a U.S. company from a foreign-owned one. We focus on where the jobs are being created and maintained, and which employers support living wages and benefits.

We know it doesn’t work to guilt-trip our members about what they buy—it’s not their fault they have a hard time finding American-made products.

The Main Street Recovery Program is another way Steelworkers discuss Buy American in local union meetings. This is a chance for a frank discussion about whose policies caused this recession, and what new policies are needed for a stable economy.

We talk about manufacturing work of the future. USW President Leo Gerard reflects on the potential for green jobs by saying, “There’s got to be 50 tons of steel in every one of those windmill towers.”

There are hundreds of vacant factories in our communities. It doesn’t matter what kinds of machines sit in those factories: we can stamp fenders or we can cast parts for wind turbines. We have enough real estate to house any kind of production, and enough out-of-work skilled people to do any new manufacturing work.

As the architects of this economic meltdown are replaced by the second string from the same team, a bold new path is in order.

Steelworkers are not trusting meek revisions of the same economic planning to stand in the way of what needs to be done. We are fighting for new work, to rebuild our economy.

Cholger is a staff rep for United Steelworkers District 2.