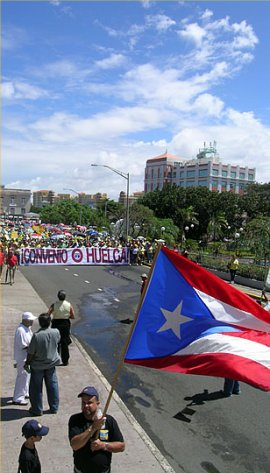 The strike followed 27 months of frustrating negotiations with the Puerto Rican Department of Education. The department failed to offer a collective bargaining counterproposal, skipped 160 of 300 meetings, and issued a series of agency memos unilaterally changing the terms and conditions of employment.

The strike was the first held in defiance of the Puerto Rico Public Sector Labor Relations Act of 1998, also known as “Law 45,” which prohibits public-sector workers from striking. It led to the union’s decertification as the exclusive representative of more than 40,000 teachers and other school employees.

FMPR President Rafael Feliciano told the press that the strike contributed to Governor Aníbal Acevedo’s promise to increase the teachers’ starting salary to $3,000 a month over an eight-year period. Puerto Rican teachers currently earn an annual starting salary of $19,200.

The union, however, remains decertified, while the island’s media reported that the U.S.-based Service Employees union (SEIU) offered support to the governor in preparation for its bid to replace the FMPR as the teachers’ representative. Dennis Rivera, an SEIU vice president, denied the charge.

ROAD TO THE STRIKE

The FMPR struck following a unanimous vote by its general assembly in November, ratifying a vote by union delegates to authorize a strike. During the next two months, the union leadership continued to call on the Department of Education to negotiate in good faith. But department negotiators refused to budge on two key issues: teacher representation on school boards and class sizes. Instead, the employer filed a complaint with regulators to decertify the union for declaring merely its intention to strike. The regulators readily complied.

In response, 25,000 teachers and supporters marched February 17 to the governor’s mansion chanting, “contract now, or we strike!”

When it became clear that the department intended to keep stalling at the negotiating table, Feliciano announced the union’s decision to strike. In the early hours of February 21, teachers and their supporters began to fill picket lines.

The teachers found they weren’t alone. As strike winds started to blow over a year ago, teachers began to organize local strike committees, composed of teachers, parents, and community members in schools around the island.

A coalition composed of roughly 70 labor, student, and community organizations was formed shortly before the strike. When the teachers walked out, the student councils at three campuses of the University of Puerto Rico each announced 24-hour student stoppages.

At one school located inside a large and well-known public housing project in San Juan, 150 parents organized their own press conference and demonstration in support. At another, students held an impromptu performance lampooning the education secretary and highlighting the terrible conditions in their school. Teachers report they are forced to make do without adequate books, supplies, or toilet paper in bathrooms.

In New York City, a group of activists, including city teachers, organized a support committee and held two demonstrations in front of the Puerto Rico Federal Affairs Agency offices in Manhattan.

On the first day of the strike, the government declared it to be a failure, claiming more than three-quarters of all teachers had shown up to work.

Union supporters paint a much different picture. Pointing to student attendance estimated by the department itself as low as 21 percent, they claim that mass absences led to the cancellation of classes for the duration of the strike.

The union further said picket lines had been set up at 850 of the 1,500 schools with active participation from one-fifth of the teachers. Total teacher absenteeism was much higher, fluctuating between one-half and two-thirds during the course of the strike.

After shutting down much of the island’s school system for two weeks, more than 10,000 teachers voted in a union assembly to “suspend” the strike on condition that strikers not face discipline, a demand to which the department consented. The government also agreed to maintain the $250 salary raise it had unilaterally declared in the weeks leading up to the strike, to lobby the legislature for funds to sustain further raises, and not to alter the points to which it had previously agreed at the negotiating table.

Union leaders have declared that they will regroup for the next round of struggle. Because the FMPR has been decertified as the teachers’ representative, the union is reorganizing as what is known in Puerto Rico as a “bona fide association,” non-majority unions without exclusive bargaining rights. Association members can voluntarily request that the employer check off their dues. Thousands of teachers have already signed up to have their dues checked off in favor of the FMPR.

The next step may be a union representation election in which the FMPR would face off against SEIU.

Although Law 45 forbids the leadership of a decertified union from running for a union post—in any labor organization within the Commonwealth of Puerto Rico—FMPR supporters believe that the strike has thrown up a new crop of leaders ready to keep the fight alive.