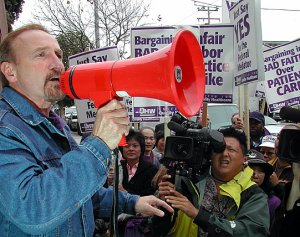 Sal Rosselli: “If SEIU goes in the direction that [President Andy] Stern is currently leading it, it will become a business union movement, a service-type organization. We want to build a real social movement union where workers are encouraged and trained to be decision-making leaders.” Photo: SEIU United Healthcare Workers—West.

A long-simmering dispute over the direction of the Service Employees (SEIU) has erupted inside the union, pitting leaders of the 150,000-member United Healthcare Workers—West (UHW) against top International officials. UHW President Sal Rosselli and other executive board members contend that the International is taking too much control of organizing and bargaining contracts away from local unions.

The timing couldn’t be worse for UHW. Last month the union launched a master contract campaign for the majority of its members working in hospitals and nursing homes. The campaign, more than 10 years in the making, involves more than 200 hospital and nursing home contracts, covering about 100,000 workers. Most expire in a three-month window starting in May.

The division first emerged last spring when the International abandoned a controversial partnership with California nursing homes. UHW had leveled harsh criticisms against the nursing home alliance, saying it provided substandard wages and job protections for newly organized workers and muzzled them from speaking out against poor standards of patient care in exchange for some organizing rights at non-union nursing homes.

“The rank and file had nothing to do with it,” said Eloise Reese-Burns, chief steward at Cottonwood Healthcare Center in Woodland, California, and a UHW executive board member. “The people negotiating those agreements [for the International] don’t work in these places. They don’t know about short staffing. They don’t know about the lack of supplies.”

Mary Mundy, a certified nursing assistant at LaMariposa Care and Rehab Center in Fairfield, California, agreed. “The International only seems interested in increasing their numbers, and they’re willing to sacrifice the members to do it. They seem to have forgotten who the union is. The workers are the union.”

Conflict between UHW and the International surfaced again in late November when SEIU announced a hasty re-organization of the union’s California state council. This move coincided with an effort by State Assembly Speaker Fabian Nuñez and Governor Arnold Schwarzenegger to overhaul the state’s health care system.

Rosselli, longtime head of the state council, had given the Nuñez-Schwarzenegger compromise a cool reception, despite the enthusiastic support of International President Andy Stern. Rosselli balked at the compromise because the plan’s individual mandates did not guarantee a basic level of care or an affordable pricing structure.

But the conflict has only intensified. The International signaled earlier this year that it would take charge of bargaining with the hospital chain Catholic Healthcare West, displacing the CHW Unity Council, a body established to coordinate bargaining between the various SEIU locals representing CHW workers. Up to that point, Rosselli had headed the CHW Unity Council—and the CHW negotiations—reflecting the fact that UHW represented about 80 percent of SEIU members at CHW with expiring contracts.

Local leaders also fear that UHW’s 65,000 long-term care members—many of whom are currently in bargaining as part of the master contract fight—will be forced by the International into another local union. Such a move would run counter to the practice in other states, like Illinois and Michigan, where the International pushed to combine hospital workers and long-term care workers into a single local union.

“The president of our union has taken it upon himself to divide us up like cattle,” Reese-Burns said. “We’re human beings and we pay our dues. All because five people in Washington, D.C., feel this is the way it should go.”

The International for its part has responded by focusing the debate on Rosselli, saying he participated in and benefited from the decisions he now criticizes. In a February 11 open letter three SEIU international vice presidents claim that Rosselli has backtracked on his commitments to a “unified national strategy” for Catholic hospital workers and nursing home workers. The letter also criticizes UHW’s organizing program as ineffective.

“Everybody says this is about Sal and Andy,” Reese-Burns said. “This is not about them. It’s about thousands of people who don’t know what is going to happen to them and don’t have a voice. We have to have our say.”

Related
Before Your Strike Vote, Consider a Practice Strike Vote »
Rank-and-File Power Is Essential to Rebuilding the Labor Movement »
Nine For-Profit Nursing Homes Pull A Simultaneous Strike—And Another Is on the Way »
Auto Workers Turn a Corner for Strike Pay and Democracy »
UPenn Teamsters Defeat Two-Tier »