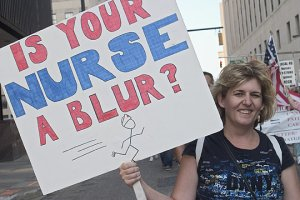 Faced with insufficient staffing, nurses in a number of states are pushing for legislation that would specify the number of patients each nurse can safely care for. Photo: Jim West.

After a patient quietly died in registered nurse Danielle Magaña’s hospital hallway, she decided she’d had enough. Although an autopsy later said the woman had died of natural causes, Magaña said the incident was waiting to happen at her chronically short-staffed San Antonio hospital.

Intensive-care nurses like her were assigned up to five patients per shift, including two in the hallways who weren’t hooked into monitoring equipment that warns when a patient’s vital signs slip away. Magaña still questions whether the woman could have been rescued if the nurses on her floor weren’t carrying such heavy patient loads.

Hospital management, she said, “do not give us the right to say, you need to call in another nurse.”

So Magaña became one of the 40,000 Texas registered nurses the National Nurses Organizing Committee (NNOC) estimates have left the hospital bedside, largely they argue because hospitals cut staff in the 1990s and quickened the pace of nursing work to intolerable levels. In a national study released in September, 42 percent of newly licensed RNs said they would like to leave bedside nursing.

Magaña is at the forefront of a push to write into law the number of patients to which each nurse can safely attend. Active in Texas, Ohio, Maine, Illinois, Massachusetts, Pennsylvania, Arizona—and soon to be in Kentucky and Nevada—the drive operates on many levels, pulling nurses into the political process, spreading the gospel that understaffed hospitals are unsafe, and channeling overworked nurses’ outrage into hospital-based organizing committees.

The ratio law is an entry point to shopfloor agitation for nurses, who pay about $30 a year in dues to join NNOC as an associate member. These members make up the foundation of NNOC’s non-majority unions, which start as advocacy committees that raise staffing issues with management as soon as a meaningful number of nurses—generally around 10—join at a hospital.

The push for ratios in the states exists sometimes uncomfortably alongside the Service Employees’ promotion of a national law to establish staffing ratios. NNOC organizers complain SEIU didn’t back their landmark California ratio law, and at times undermine their efforts by seeking alliances with hospital chains. SEIU didn’t respond to requests for comment.

One of the newest battlegrounds is Ohio, where nurses expect their ratio law to be introduced in February. Hospital trade groups in the state have attempted to head off the ratio movement by introducing competing legislation—a move copied from health care industry lobbies in Illinois. Their proposals oblige hospitals to publicly release staffing plans.

Ed Bruno, NNOC’s national organizing coordinator, calls that an industry fig leaf because it doesn’t mandate specific numbers of patients per nurse. The debate boils down to whether public disclosure of staffing conditions will sway hospitals to regulate themselves, said Sean Clarke, a nursing professor at the University of Pennsylvania.

Unwilling to cede control over employment policy, the hospital industry argues ratios are a blunt, inflexible regulation. Terry Gallagher is an RN who’s worked for 11 years as a travel nurse at more than 16 hospitals in northeast Ohio. He said current staffing practices fail to account for the complex, constantly shifting demands placed on nurses—and that “flexibility” is code for forcing nurses to work on foreign terrain.

“A hospital can float a nurse into critical or emergency situations with absolutely no experience or expertise,” he said. “It is unconscionable and I have witnessed it.”

He began to refuse work in some hospitals after chancy encounters stacked up. Once he found himself sitting on a patient, trying to apply enough pressure to stop his bleeding as he waited to wheel him into the operating room.

“I had to make choices as to who I had time to intervene with,” Gallagher said. “This was not a battlefield.”

California’s early experience with ratios sets the bar for other state campaigns. After a decade of pressure, the California Nurses Association won mandatory minimum staffing levels in 1999, only to later see Governor Arnold Schwarzenegger repay his hospital industry supporters by delaying and attacking the law.

As journalist Suzanne Gordon details in her upcoming book on ratios, Safety in Numbers, the nurses fought back with studies, lawsuits, and highly visible protests, successfully defending the ratios, which limit each nurse to two patients in intensive care. Other California ratios vary, and those in specialty units were lowered in January from five to four patients to a nurse.

Ratios became a fact of life. Jan Rodolfo, an oncology nurse at Alta Bates Summit Medical Center in Oakland, California, said they allow nurses to educate patients and their families about their course of care, and reduce medication snafus and response times during emergencies.

They also became a topic of constant scrutiny. Researchers began to confirm that ratios improved patient care along with nurses’ job satisfaction and work conditions, all of which brought 52,000 more nurses into the workforce by 2006 than California had anticipated, an unexpected boon in an industry facing a massive nurse shortage.

Clarke said the associations between quality of patient care and staffing levels only stand to reason.

“You can’t put 50 students in a classroom and expect the teacher to perform well,” he said.

Winning a state law is hard enough—Massachusetts nurses have been trying for 11 years—but it isn’t sufficient.

“Even if you have a great law, if you don’t have organization you can’t enforce it,” said Meredith Schafer, an NNOC organizer in Texas.

California nurses warmed to that lesson quickly. Their law shifted the balance of power in hospitals, Rodolfo said, and hospital-by-hospital committees allowed nurses to identify and respond to management’s cost-shifting tactics after they were required to increase RNs to meet the ratios.

Managers often force nurses to pick up a colleague’s patients during meals and breaks, a tactic they employ because there’s no financial penalty if hospitals fail to meet the ratios.

But missing a meal or break is punishable by an hour each in penalty pay, which led nurses to coordinate the filing of hundreds of individual complaints. At one hospital, Alta Bates Summit, the campaign produced $1.9 million in penalty pay last year—a pressure tactic nurses say is necessary to convince hospitals not to cut corners on staffing.

Only 15 percent of nurses nationally belong to unions, Bruno said. That opens wide opportunities to turn nurses’ dissatisfaction at the bedside into motivation to change industry standards through organization.

A powerful example to draw from is the nurses in Australia’s Victoria state, who won staffing ratios in 2000 and defended them against a conservative government’s backlash through vigorous (and illegal) job actions. By constantly educating nurses and linking improvements in care to ratios, “they became like antibiotics,” Gordon told Labor Notes. “Who would oppose it?”

Most surprising to U.S. nurses is the fact that Victoria is an open-shop state, despite which almost three-quarters of public sector nurses belong to the union.

In Texas, where nurses have rallied for two years for ratios, making inroads is slow work. Nurses are taught to think their professional status will decline if they ally with blue-collar institutions like unions. Danielle Magaña fills a notebook with the misunderstandings nurses have—that unions are illegal, for instance—and has counted 35. She got a reminder of hospital conditions when she gave birth in July.

“As a patient, you remember what it’s like on the other side,” she said, shuddering.