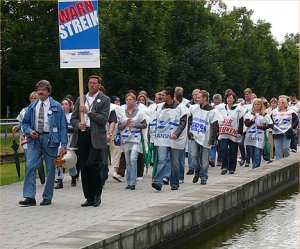 Despite commuter and travel delays, a recent poll found that 71 percent of the German public sympathize with the strikers. Photo: Transnet.

The Transport, Service and Networks Union (Transnet), the largest of the company’s unions, is coordinating its bargaining with the German Railway Civil Servants Union (GDBA), a civil service employees union. These unions represent the majority of rail workers, including maintenance, track, and counter personnel.

The unions are demanding a seven percent wage increase.

The German Locomotive Engineers (GDL), which represents locomotive engineers, ticket collectors, conductors, and dining car workers, is demanding a separate contract for its 30,000 members. The GDL wants pay hikes of up to 31 percent.

Norbert Quitter, a regional chairman of the GDL, explained, “The 31 percent demand is an extreme case and refers only to the starting salary. We are coming from a low level.”

Dominick Schweitzer, a locomotive engineer based in Munich, noted that his counterparts in Austria “earn after taxes between $682 and $819 more [than German engineers].”

The GDL’s insistence on a separate agreement is causing friction among the rail unions. In Germany, single unions tend to dominate entire industries. Verdi, for example, represents service employees, while the steel, auto, and electronic workers are members of IG Metall.

Transnet President Hansen called the GDL “power hungry” and criticized the GDL for not showing solidarity toward rail employees who do not have the same leverage as the engineers.

GDL President Manfred Schell countered that the engineers want a separate agreement because they have “a great deal of responsibility for people and machinery. They have to make decisions independently.”

Despite commuter and travel delays, a recent poll found that 71 percent of the German public sympathize with the strikers. The rail passenger advocacy organization Pro Bahn has allied with the workers and proposed, as an alternative to striking, that conductors allow passengers to ride the trains without paying. “That would very much hurt the railway,” said Pro Bahn representative Karl-Peter Naumann, “because the Bahn would have a high loss of revenue.”

The threat of additional mini-strikes during the summer tourist season led the Deutsche Bahn to reach an agreement with Transnet and GDBA in July. The 19-month contract included base pay increases of 4.5 percent beginning in 2008 and a one-time payment of 600 Euros.

The settlement does not apply, however, to the GDL, which announced a limited three-hour strike on July 10. The company initiated legal action against the GDL and a labor court in Mainz issued a nationwide injunction against the limited strike. Despite the legal move, the union successfully shut down rail traffic in major cities such as Berlin, Munich, and Hamburg.

Schell said the GDL will continue to rely on “warning strikes” regardless of the legal process. The engineers are mobilizing for a strike vote that would authorize a full-time, unlimited strike. As Labor Notes went to press, a new bargaining session between between the GDL and the Deutsche Bahn was scheduled.