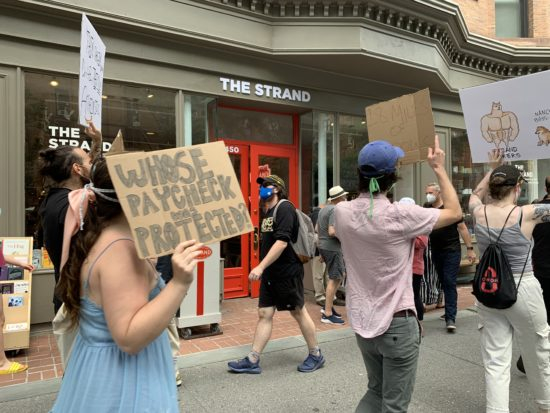 Shop stewards at the Strand, a prominent New York City bookstore, are denouncing owner Nancy Bass-Wyden for accepting federal loans but failing to keep workers on the payroll.

Strand Bookstore, Inc. received a federal Paycheck Protection Program (PPP) loan of $1-$2 million by claiming to retain 212 jobs. (Public data provide only a range for the loan amount, not a precise figure.) But in fact Bass-Wyden laid off all but a few employees shortly before applying for the loan.

She is only one of countless business owners who have taken taxpayer money and proceeded to lay off workers—despite the threat of repercussions, in New York, from Governor Andrew Cuomo.

Of about 170 members of United Auto Workers Local 2179, all but very few were laid off in March even though Bass-Wyden had applied for PPP. Forty-five employees were brought back to reopen the store June 22. On July 7 Bass-Wyden once again laid off 12 union workers, two weeks after rehire.

Bass-Wyden also made multiple large purchases of Amazon stock during the shutdown, totaling $160,000-$400,000. According to public filings, she has added $2.25-$5.8 million in stock to her portfolio since March

HOW WE FOUND OUT

We began with news articles about the bookstore, including those about Bass-Wyden’s stock buys and interviews she gave about COVID-19 and the layoffs.

When the Small Business Administration made data on PPP loans public, it was not done in a user-friendly format. Luckily for us, syracuse.com made a searchable database of all PPP loan recipients in New York state. With diligence, we found data on the loan the Strand received. Exact loan amounts are not disclosed, but the exact number of employees claimed to be retained is.

To track down Bass-Wyden's stock purchases, we scoured through publicly available Senate financial disclosure filings for Senator Wyden. The majority of his filed wealth and financial transactions are in his wife’s name. We only used data labelled as “spouse.”

Stewards worked together to compile this info in a shared online document, producing a press release and info sheet which we distributed to news outlets July 13. (We have found Google Docs and Google Hangout helpful for organizing remotely, to create and edit materials together and for meetings.)

Our laid-off co-workers staged a protest July 15 during the grand opening of a new Upper West Side Strand store—with Bass-Wyden inside. These workers organized the action on their own, using a digital communication platform similar to WhatsApp.

Our demands on Bass-Wyden now deal with three issues: health and safety violations, management doing bargaining unit labor, and transparency about the allocation of PPP money.

Health and safety. Before returning to work, every worker signed off on a health and safety plan the company had produced. But as of a month after reopening, some of the most critical measures still have not been implemented.

Although we have acquired enough personal protective equipment and acrylic barriers, we struggle to enforce the mask policy. The stores have no professional security to protect us in the case of an angry customer refusing to comply, because Bass-Wyden has not rehired the security team. Our Upper West Side location remains open despite many fire code violations found during inspection by the stewards.

At first, Bass-Wyden herself blocked management from spending the money needed to rectify the situation. Once the threat of a grievance was made clear, she released the funds.

We even caught her removing from our front doors health and safety signage explaining capacity and our mask policy. Her reasoning? The signs were “too big” and she “didn’t like them.”

We are making progress with management toward a resolution.

Theft of union labor. The recent layoffs left us with 22 full-time union workers at our flagship store in the East Village, which occupies five floors of a building and operates seven days a week. The new Upper West Side store has two full-time union workers covering two floors six days a week. With not enough union personnel to do all the work necessary, managers began stepping in and doing bargaining unit work: fulfilling and packing orders, staffing information desks, ringing registers, and unloading truck deliveries.

The only possible resolution to this grievance is to rehire all the union workers necessary to run both stores and warehouse. Our union has sent a cease-and-desist email and filed a grievance; arbitration may be necessary.

PPP money and stock-buying spree. Our UAW Region 9A leadership is looking into our concerns about the stock buys and whether Bass-Wyden has violated the terms of the PPP loan. Many questions are unanswered. Bass-Wyden clearly lied about job retention on the loan application, and she has not retained the amount of staff required by law to keep the money.

Where did the money go, if not to our payroll? If Bass-Wyden did not misuse the funds, she should have no problem being transparent with the union and the taxpaying public. Thus far she and management have provided only vague answers.

We know we’re not the only workers experiencing these hardships. We encourage other workers in union shops to demand transparency. Check the data from the Small Business Administration
SBA Total Listings) and see if your company received a loan. If your employer did not use the funds properly, call them out and pursue the matter.

With inadequate oversight from the government, it is on us to make these demands and protect each other.

I’d encourage readers to be skeptical of this article. The rank-and-file of the unit were not consulted regarding this content. The demands listed are those of the stewards and not necessarily the workers. The stewards frequently behave unilaterally in collaboration with store management and do not ask for or respond to input from the workforce. This is not an accurate depiction of the reality on the ground.