Viewpoint: A Smart Strategy to Defeat ‘Right to Work’ 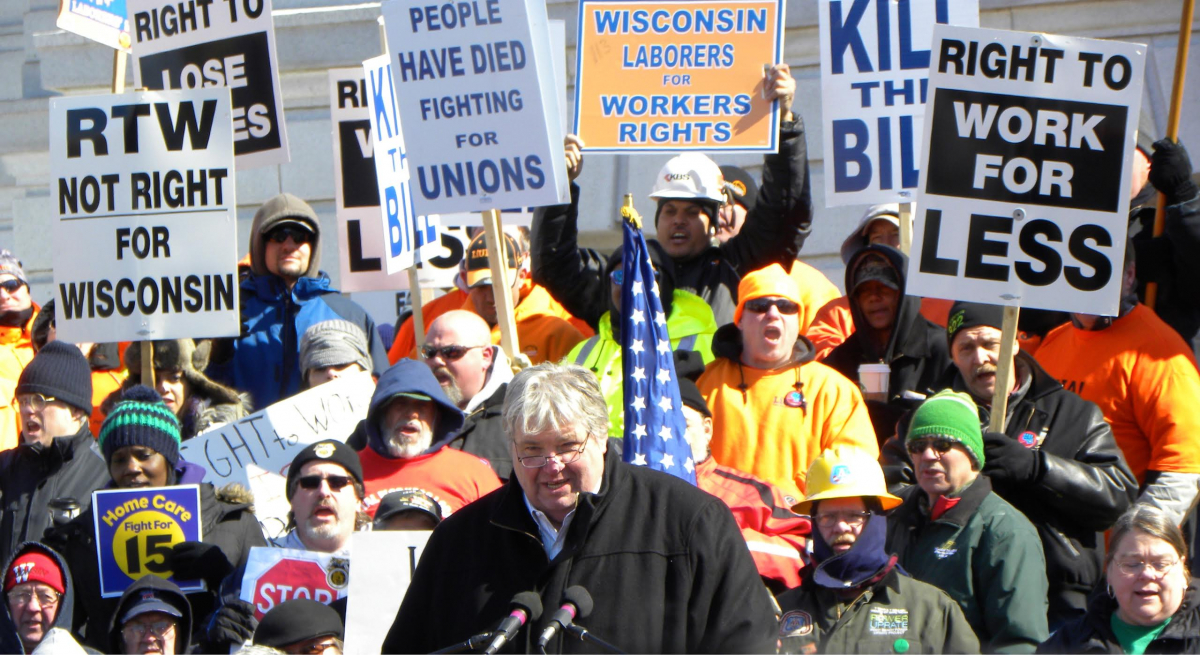 Without aggressive action, the right-to-work tsunami will sweep more states. "Just Cause for All" campaigns should be part of the strategy. Photo: Glenn Schmidt.

Wisconsin is now the 25th state to adopt a so-called “right-to-work” law, which allows workers to benefit from collective bargaining without having to pay for it.

It joins Michigan and Indiana, which both adopted right to work in 2012. Similar initiatives, or variants, are spreading to Illinois, Kentucky, Maine, Missouri, New Hampshire, New Mexico, and West Virginia—and the National Right to Work Committee and the American Legislative Exchange Council probably have a well-developed list of additional targets.

Without aggressive action, the right-to-work tsunami will sweep more states. To defeat it, the first step is committing to fight back, rather than resigning ourselves to what some say is inevitable.

We’ll have to go beyond what we’ve mostly been saying so far, which is that right to work is “unfair” or “wrong.”

That argument certainly works for most union households and many of our community allies. But the real challenge is to convince a much broader public that a strong (and fairly-funded) labor movement is in their interest and worth preserving. Clearly most Americans aren’t yet convinced.

Many unions over the last few years have undertaken important campaigns along these lines. For example, teachers unions have positioned themselves as defenders of quality public education. Refinery workers have struck for public safety.

Nurses and health care unions have fought for safe staffing to improve the quality of care. And most notably, the Service Employees (SEIU) and others have waged the “Fight for $15” for fast food and other low-wage workers.

In its own way, each union is working hard to be a champion of the entire working class. Yet with the exception of SEIU’s Fight for $15, each is essentially focused on the issues of its core constituency at work. This still limits the public’s perception of labor.

Supporters of right to work cynically play on the resentment many workers feel about their declining standard of living. Absent a union contract, the vast majority have few, if any, ways to address it. To most, organizing looks impossible and politics looks broken.

Workers’ understandable frustration is fertile ground for the far right, which promises to improve the business climate and create more jobs by stripping union members of their power.

Thus, when we anticipate right to work’s next targets, the best defense should be a good offense—one that clearly positions labor as a force for the good of all workers.

‘Just Cause for All’

Here’s one approach that would put labor on the offensive: an initiative for a new law providing all workers with due process rights to challenge unjust discipline and discharge, “Just Cause for All.”

Such a law would take aim at the “at-will” employment standard covering most non-union workers in the U.S. At-will employees can be fired for any reason and at any time—without just cause.

While such a major expansion of workers’ rights as Just Cause for All would be unlikely to pass in most state legislatures—Montana did it in 1987, but it’s still the only one—it could become law in states that allow ballot initiatives.

A well-orchestrated attack on the at-will employment standard would force the extreme, anti-worker, and big business interests who back right to work to respond. If nothing else, imagine how competing initiatives would force a debate. On one side, extending due process protections and increased job security to all workers: a real right-to-work bill. On the other side, taking away fair share contributions for collective bargaining.

This strategy isn’t untested. When the Coors beer dynasty backed a right-to-work ballot initiative in Colorado in 2008, labor collected signatures for a counter-initiative, “Allowable Reasons for Employee Discharge or Suspension,” which would have overturned at-will employment. (Labor also supported a proposal that would have provided affordable health insurance to all employees and a measure to allow workers injured on the job to sue for damages in state courts.)

Fearing that the just cause proposal might pass, centrist business people offered a deal. In exchange for labor withdrawing its proposal, they provided financial support and manpower that helped labor defeat right to work in Colorado. (For more on this story, read “The 2008 Defeat of Right to Work in Colorado: Is it the End of Section 14(b)?” Raymond L. Hogler, Labor Law Journal, Spring 2009.)

While it’s unfortunate that the labor initiative didn’t go before Colorado voters, the result was still encouraging—and instructive. By championing the interests of all workers, labor split business and blunted the right-to-work effort.

Just Cause for All campaigns should be part of the strategy. Even if we lose, campaigns for due process and job security for all will help shift the debate on right to work, leave the labor movement stronger—and make labor and its allies once again the champions of the “99%.”

Rand Wilson is policy and communications director at SEIU Local 888 in Boston.

Related
Richmond Educators Are First In Virginia to Win Bargaining Rights »
Janus for the Rails and Air? »
Using 'Just Cause' to Defend Against Unfair Discipline »
Why Missouri 'Right to Work' Went Down in Flames »
Viewpoint: Unions Aren’t Exclusive Clubs—We Fight for All Workers »

We need to stop calling it "right to work". Although it sounds great, everything about that tragically mis-named legislation is a lie. "Right to work for less", is too long, and the syllabacation is too choppy. Simply call it what it is, and what is easy to repeat and remember, being a crisp 3 syllables. "Work For Less", which is what people will be doing, if it's adopted by their own state legislature.

This is not an issue to be settled by law, it should be settled over the bargaining table in the free market system. Let the employees and employers agree, by contract, about the payment of representative dues. If an employer doesn't want to agree they can simply say "No" to the demands for this when the representatives of their employees ask for it. Why seek government relief? Companies are free to say "No"!

This is not something to be determined by fiat, law, regulation, or mandate by the government. Let the parties alone, to be free to settle the issue between themselves. That government that governs least, governs best.

Companies just want government control to do their work for them. Workers aren't asking for Right-to-Work laws; companies are asking. The government should not get involved.

Bother Wilson, thank you you your insightful article about proposal to make the work place right and fair for workers and not just for employers. I have another suggestions to make RTW laws fair. The laws should allow employers not to follow the union contract for the employees who do not want to pay dues instead of forcing the employer and the union to follow the contract even for those that choose to not be bound by it in their choice to not pay dues. I think very few will then decide to give up the wages, benefits and working conditions that others are paying dues to have. The boss can decide to compensate them any way the company thinks is fair, and not follow the collective bargaining agreement when it comes to lay-offs or dismissals.

That's a good idea, but I believe current federal law requires unions to provide representation to everyone covered by the contract regardless of whether they pay dues or not. It's a very unfair law, but not likely to change soon.

I'd like to hear from Labor Notes subscribers! What do you think of this proposal? Leave comments or email justcauseforall[at]gmail[dot]com.

Yes, great idea. It completely changes the storyline about us, from caring only about our members and increasing our numbers and dues to caring about everyone.

I agree completely with Rand's proposal. When I was fired by a social services agency, they initially claimed that they had cause to fire me - in order to try to deny my unemployment benefits. After I successfully challenged their allegations, they replied with, "well, as an employee at will, we did not need a reason to fire you".

Unions are seen by many as special interest groups for their own members. Even for those of us in a union, much of our protection and benefits have been won through legislation. Indeed, unions exist due to legislation, some enabling and some limiting. For those of us who want to rebuild labor's strength, we need to use every available path, including legislation.

Termination only for just cause, is a great place to start, and should be supported by all of us, including those of us currently in unions.