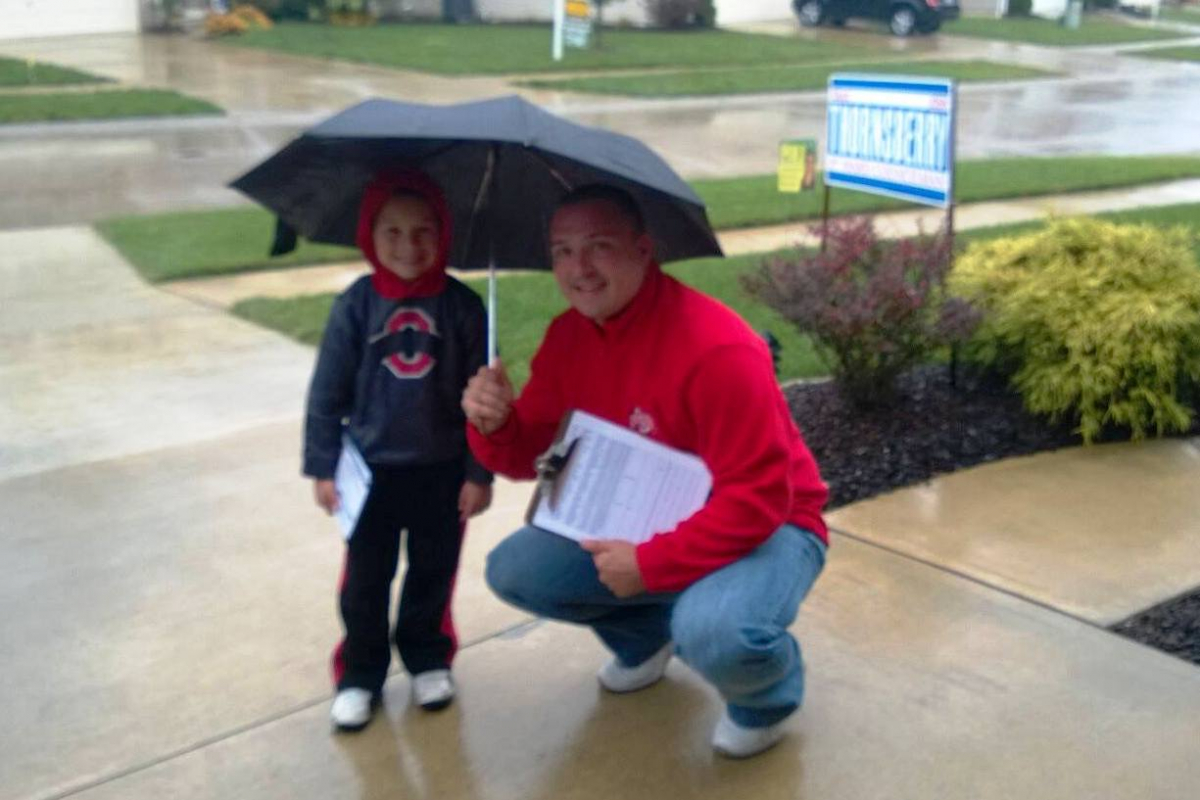 After one too many sell-outs by the local Democratic Party, the Lorain County central labor council decided to draw "a line in the sand" and run their own city council candidates on an Independent Labor Party ticket. Two dozen won seats—including union teacher Joshua Thornsberry, who beat the head of the local Chamber of Commerce, shown canvassing with his young son. Photo: Joshua Thornsberry.

Union-dense Lorain County, Ohio, is now home to an independent labor slate of two dozen newly elected city councilors—recruited and run by the central labor council there. All labor’s candidates had strong showings last month, and all but two were elected.

“This was a step we took reluctantly,” said Lorain County AFL-CIO President Harry Williamson. “When the leaders of the [Democratic] Party just took us for granted and tried to roll over the rights of working people here, we had to stand up.”

A series of disputes between organized labor and the Democratic leadership led the labor council and its allies to recruit and run their own slate in this Democratic stronghold, home of Ohio’s largest steel and auto facilities.

The unions had worked for years to build a labor-community partnership that resulted in a Lorain city Project Labor Agreement (PLA), which required that city contracts be staffed by at least 75 percent local and 9 percent minority workers, and unionized during the period of the project.

But Mayor Chase Ritenauer pushed the city council to repeal it.

“It took us three years to negotiate this historic agreement,” said Joe Thayer, marketing director of the Sheet Metal Workers Union, “and it took them three days to kill it!”

The city council voted 8-2 in favor of the repeal. It was reported that an estimated $29.6 million in city road and water projects were soon to be awarded.

“Before we had the PLA, Lorain regularly hired contractors from outside the city and county,” said Rick Lucente, councilman and Steelworkers member, who voted no on repeal. “Repealing the PLA is taking work away from people here and revenue away from our city.”

Another big fight was over a contract dispute involving the Teamsters and the city. Mayor Ritenauer, with some of the council members, borrowed city trucks from nearby Elyria—another Democratic stronghold—and actually worked on the trucks to try to break the sanitation workers’ strike.

“That was the final straw,” according to Williamson. “You just plain do not cross a picket line and scab! There has to be a line in the sand.”

So the labor council decided to run its own slate of two dozen candidates, mostly union members, for city council seats in the towns of Lorain, Amherst, Avon, and Avon Lake.

Union teacher and newly elected Eighth Ward Council member Josh Thornsberry triumphed over incumbent Frank DeTillio, who is also president of the Lorain County Chamber of Commerce. “This is just a first step,” Thornsberry told the labpr council, “but we will be taking many together in the future.”

The union crowd at the labor council meeting, some in “Independent Labor Party” shirts the council had ordered for the campaign, greeted the victorious candidates with loud cheers and optimism. The council has ordered more shirts to supplement the 500 used during the campaign.

“We didn’t pick this fight, but we had to finish it,” said Thayer. “We need to build stronger alliances, work with more friends. Even if we put our issues on a back burner to help and fight for our friends in the communities, we need to keep reaching out and show that our interests are the same as others’. If we do that, then we’ll grow.”

The Lorain central labor council is a wide federation, including unions both in and out of the AFL-CIO. A local immigrant rights organization is slated to affiliate, and a student-labor group at nearby Oberlin College will be brought on board, too. Over the years the council has often fought alongside community forces—including defeating a Walmart coming in, working against racist attacks, and working for minority hiring.

‘We Can Elect Our Own’

The meeting decided not to publicly reply, but to offer to buy a table at the upcoming Party dinner and give all proceeds to Matt Lundy, a progressive Democratic state representative now running for the only GOP-held county commissioner position.

“Running independent wasn’t our first choice, but hopefully this can help bring the Democratic leaders to their senses,” said Machinist Art Thomas. “If not, we’ve shown them that we can work with our friends and elect our own!”

Bruce Bostick is now Ohio state coordinator for the Alliance of Retired Americans and the Steelworkers Organization of Active Retirees and was a delegate to the Lorain County central labor council for more than 30 years.

Related
Auto Workers Win Direct Democracy in Referendum »
New York City Workers with Disabilities Fight for Inclusion in Pandemic Recovery, Mayoral Race »
We Need Democracy on the Job and in the Union, Too »
2020 in Review: Workers Struggle Under the Weight of the Pandemic »
Cleveland Heights Teachers Strike in the Snow, Beating Austerity with Solidarity »

Bruce- thanks for posting this article. I went to Oberlin College and stuck around after graduating, so it always does my heart good to hear about wins in Lorain. I organize with the Ohio Student Association, which organizes students across the state, and I'd really like to get in touch with folks in this coalition, and see if there are any ways students in public universities and colleges can get involved in this kind of power building and slate-running. Please contact me at joel@ohorganizing.org to get in touch!

Great article Bruce! Now lets bring that fighting spirit to every city and county council in the nation!

Excellent! This is a great example for other workers in cities and towns across the country.

Outstanding job! For far too long, unions and union members have been treated as cash cows by the Democratic Party. The fact is that both political parties are bought and paid for by the same corporate elite, leaving Americans with the illusion of choice. We need more union members running as Indies for these seats.

This proves that we can achieve most of our goals by building a national Labour party. Australia's Labour Party got their people a Minimum Wage of $16.36 per hour! That alone could get us millions of votes. See my website for more about having our own political party working for us 24/7.
My web site is www.BoldThoughts.org Howard M Greenebaum, author and newspaper columnist