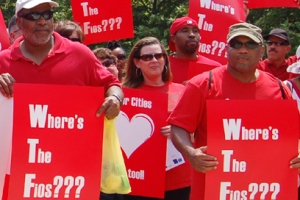 CWA members in Baltimore ask why all the affluent counties around the city have FiOS but Verizon hasn't installed its fast, efficient fiber optic system in the urban core. Photo: CWA.

Verizon workers struck for two energetic weeks last summer in response to billions’ worth of concessions demands from the profitable telecommunications company. Now, after 12 more months of fruitless negotiations, 45,000 Communications Workers and Electrical Workers (IBEW) across the Northeast may be putting down their tools and walking out again.

"It's cut and dried that they want to break us," said Billy Gallagher, a CWA negotiator. Within a couple of weeks after the strike last year, he said, the company “went back to stripping 50 years of contract language.”

In addition to attacks on health care and pensions, Verizon wants to obliterate restrictions on contracting out, a measure that could eventually threaten the union’s existence. Verizon already contracts out thousands of jobs, including installation, sales, and service, to non-union shops.

If Verizon tries to impose its final offer, a walkout could take place as soon as August 10.

At the same time, Verizon is also engaged in a tricky negotiation with federal regulators, as it tries to ink an agreement with four cable companies who would all sell each other’s products.

Union members have been calling the Federal Communications Commission and the Department of Justice, urging them to reject the deal, which they say would create a near-monopoly, cost thousands of jobs, and drive up prices for consumers.

The union suggested mediation two weeks ago and results are expected August 3. Under the back-to-work agreement signed last August, union and company each have to give seven days’ notice to end the contract.

"The mediator has a plan to bang heads together, but that doesn't mean the company will relent," said Bob Master, political director of CWA District 1.

Staffers and members speculated that Verizon execs agreed to mediation only because they would look even worse if they refused and simply imposed their last offer. But negotiators said they fully expect the company to reject the mediator’s efforts and do just that.

Workers described what’s on the table as “completely horrendous.” New hires would have no pension, just a 401(k) plan, while many current workers would have their pensions frozen. On health care, “it’s not really about premiums,” Gallagher said. “It’s about gutting the medical plan and making it so expensive many won’t use it.”

The company would also take away some sick days, cut disability benefits in half, and even eliminate a death benefit.

“We’re ready to go out and fight if we have to,” said Al Russo, vice president of CWA Local 1101 in New York. He said that in order to outsource more jobs, Verizon wants to implement “call sharing,” meaning that the company could direct incoming sales and service calls anywhere, including contractors. “We couldn't even find out where the work is," said Russo.

Workers find the proposal even more enraging in light of Verizon’s vast profits and lush raises for upper management. In the last five years, profits were $20.5 billion and the top five executives were paid $258 million. Observers see the fight as another watershed for labor, as an immensely profitable company attempts to force concessions.

In a meeting with other unions and community allies in New York on Friday, CWA leaders hit hard at Verizon’s proposed “marketing agreement” with four cable companies—Comcast, Time-Warner, Cox, and Bright House Networks. They urged community leaders to unite against the proposal.

If approved, the companies would cooperatively market bundles of phone, internet, wireless, and cable TV to the public, splitting the profits and eliminating competition.

Under the deal, instead of competing with cable, which would require up-to-date infrastructure, Verizon would be splitting revenue with the cable companies—and colluding with them to set prices. Layoffs of Verizon FiOS workers would follow.

Even now, Verizon has redlined many urban areas as it built FiOS networks in the affluent suburbs surrounding Boston, Baltimore, Albany, and Buffalo but left the urban cores to the mercy of cable companies.

In response, mayors of nine upstate New York cities, including Albany, Buffalo, and Syracuse, signed a letter to the FCC and the Department of Justice decrying the redlining and charging that if the new deal is approved, Verizon will increase the “digital divide” between those who have affordable high-speed internet access and those who don’t—a fault line based on income and race. The mayors predicted higher prices, fewer services, and less economic development in their cities as a result.

Forty strikers were fired for picket line activity last August, and they still haven’t gotten their jobs back, said Rich Corrigan, a Verizon field technician and one of the 40. All have cases grinding through administrative courts after the National Labor Relations Board found merit to the strikers’ argument that they were unjustly fired.

“It was always a steward or picket captain, and they’re fired for words,” said Corrigan, who has been attending all the hearings. “The accusations were so baseless, it’s clearly union-busting and retaliation.” He said managers often haven’t been showing up in court to swear to the statements they made at the time. “Read into it what you will.”

New Jersey IBEW members are currently getting their day in court, with arguments expected to wrap up August 1. Twenty-three CWA members expect to go to court September 10. But even if they win this round, appeal after appeal by the company could leave the workers on the street for years, Corrigan said.

The union won’t sign an agreement unless the workers are back on the job, CWA President Larry Cohen told members on a conference call last week.

The fired workers have been the focus of demonstrations over the last few months, as Verizon workers have mobilized to keep heat on the company during negotiations.

Verizon workers have also rallied and leafleted in front of businesses who share board members with Verizon, like Darden restaurants and the bank Banco Popular. A rally is planned for Philadelphia on August 11.

Leafleting at Verizon Wireless stores has continued sporadically. Russo said that early in last year’s strike, mass picketing at Verizon stores was workers’ most effective tactic, aside from their mobile picketing of scabs doing bargaining unit work. He said the key to creating future pressure was to stop Verizon from making money: “That's the only thing that'll affect this company.”

Master recalled that workers walked out for four months in 1989, back when the company was called NYNEX. But he said lower union density in the country makes winning a strike harder today. “We've been mobilizing, wearing red shirts, picketing for 25 years, the company's used to that,” he said. “We have to figure out avenues that have real leverage.”

“If we do strike,” said Master, “we’re going to have to run a strike like we’ve never done before.”

Related
Will Urgent Care Doctors Be Forced to Strike in a Pandemic for the Right to Go Home? »
A Common Defense: Mobilizing Veterans in Labor to Beat Trump and the GOP »
Understaffed and Unsafe, Bay Area Hospital Workers Strike »
On Medicare for All: Fight for What We Want, Not What We Think We Can Get »
How E-ZPass Workers on Staten Island Are Building Power During the Pandemic »

WASHINGTON, D.C. — For the past ten days, the parties have been engaged in continuous negotiations under the auspices of myself and Director of Mediation Services John Pinto. The negotiations have been constructive and progress has been made, but significant key issues remain to be resolved. Negotiations will resume on Monday, August 6, at our offices.

tHIS JUST IN AND THE TALKS WILL CONTINUE ON aUG. 6TH. Some progress has been made. Keep the faith and ASAP (always say a prayer).

This is not going to be good

Don't just go out on strike. Do it at the most opportune moment. Wait until a hurricane hits the east coast. Knocking out service to a large number of copper and fios customers. Then you hit them hard and strike. Don't do it like last time. Going out for two weeks and then coming back just before all the rain and hurricane hit. It's not rocket science... Looks like the army is being run by a bunch of Privates when you need a few Generals.