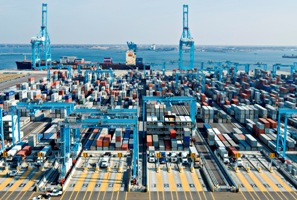 Arrests and train blockades may have grabbed the headlines, but automation was at the heart of the year-long conflict between the West Coast Longshore Union (ILWU) and grain terminal operator EGT.

At the same time ILWU members were fighting to keep work at the $200 million terminal in their union, they were pushing for the right to perform new jobs in the state-of-the-art operation and to keep control of the critical functions of loading and unloading grain—even as machines perform more of the work.

The prime target was work in the control room, where closed-circuit video cameras allow two operators to monitor the vast network of conveyors in the 35-acre facility and remotely control grain silo machinery. Performing maintenance and repair on the automated conveyors, as well as the new robotic systems for unloading grain, was also a top ILWU priority.

The heated battle over 25 jobs underscores the pivotal moment longshore workers on both coasts face, as employers deploy new technologies to erode one of labor’s strongholds.

For the East Coast longshore union (ILA), automation is a here-and-now challenge, one emerging in its core base of containerized shipping. Containers are the 40-foot steel boxes, containing anything from flat screen TVs to scrap metal, that workers unload from ships onto rail cars and trucks.

In Jacksonville, Florida, port authorities approved construction of a fully automated terminal operated by the shipping giant Hanjin. Remote crane operations and container stacking will cut average staffing requirements per ship from 26 to as few as 15.

Coordination through the international union has been conspicuously absent, leaving the locals to fend for themselves.

With the longest track record, Norfolk’s experience with automated yard operations serves as a cautionary tale. In 2007 the port introduced remotely operated yard cranes, controlled through a combination of GPS technology, cameras, and computers. Rail-mounted cranes stack containers seven high and eight wide, delivering them to trucks or rail cars. Six cranes can be operated by one operator from a computer booth inside the terminal.

“Everything is high-tech now. It’s all about moving cargo quickly,” said Thomas Little, president of ILA Local 1248 in Norfolk. “It’s not going to stop, so we have to make sure we’re a part of it.”

Since the changeover, members of ILA Locals 1248 and 970 have lost almost 100 jobs compared to conventional terminal operations. Lack of work at the container terminal strengthened the hand of break-bulk operators in Norfolk, who forced workers to accept a 36 percent wage cut for handling non-containerized cargo.

A shrinking workforce and fewer hours also threw the local pension fund into a tailspin, leading trustees to cut pension accrual by 39 percent.

Fifty years ago, when an earlier round of waterfront mechanization threatened to disrupt coast-wide standards and cut jobs massively, dock workers on both coasts accepted automation—but only after extracting job protections, income guarantees, and a share of the gains from rising productivity.

They also fought to hold on to strategic jobs within the new system, maintaining their grip on the movement of goods across the waterfront.

But today’s longshore unions need to look far beyond the waterfront if they want to hold on to their power, says Tony Perlstein, secretary-treasurer of ILA Local 1588 and co-chair of the Longshore Workers Coalition, a reform group inside the ILA.

Perlstein says that employers treat their supply chains—from factory floor to retail shelves—as an interlocking system, and unions need to organize accordingly. That effort is in full swing for one key non-union port job—the truckers who haul the containers away.

But unions need to spread along the whole logistics chain: workers in warehouses, in intermodal transfer stations between rail and truck, and in inland ports. Unions should target the critical repair and maintenance functions created by automation as well as new jobs in expediting, managing information systems, and warehousing data.

“The way the work was done before is not how it’s going to be done in the future,” Perlstein said. “If we’re going to maintain numbers and control, the union has got to see itself as a logistics workers union. We need to be expanding along the supply chain rather than circling the wagons on the docks.”

If automation is inevitable, Perlstein said, unions should demand guarantees and benefits for existing workers as was done 50 years ago.

A version of this article appeared in Labor Notes #396, March 2012. Don't miss an issue, subscribe today.
Related
It's Awfully Convenient for Shippers that Longshore Workers Get Blamed for Delays, As Contract Fight Looms »
The Supply Chain Disruption Arrives ‘Just in Time’ »
Bottom-Up Labor Solidarity for Palestine Is Growing »
Interview: 'Things Shouldn't Be Like This': Why One Amazon Driver Walked Out on Easter »
Insatiable Shipping Companies Set the Table for the Suez Canal Ship Debacle »

And to my recognition none of the longshoreman from local 21 IWLU, are working in the control room at EGT! Way to go EGT!.