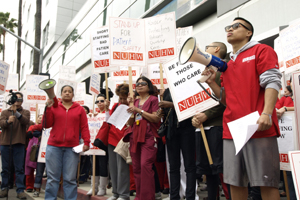 More than 1,000 nurses at Kaiser-Permanente’s Los Angeles Medical Center walked off the job Wednesday over staffing levels they say threaten patient care. The nurses—members of the National Union of Healthcare Workers—say Kaiser is stalling contract talks and refusing to improve nurse to patient ratios. Photo: NUHW.

The nurses—members of the National Union of Healthcare Workers (NUHW)—say Kaiser is stalling contract talks and refusing to improve nurse to patient ratios.

California became the first (and so far, only) state to mandate specific nurse to patient ratios, which took effect in 2004. Research has shown the ratios have kept more patients alive, lowered the frequency of preventable complications, and decreased the number of nurses who burn out and leave the job.

But nurse shortages are still common at Kaiser, said Douglas Aberg, a 17-year hospice nurse. NUHW is looking to write the standards into their contract, upping their leverage to enforce the ratios. The union is also pushing for guarantees that the hospital will add more staff when patients get sicker, and won’t compromise patient care by floating nurses into areas outside their expertise.

“We’re trying to get Kaiser off the dime,” Aberg said. “We’ve been through 17 meetings but Kaiser is still dragging their feet. If we can’t get this point across at the bargaining table, we’re going to strike.”

Aberg says union meetings helped him realize that short staffing wasn’t just a problem in his unit—it’s everywhere. Negotiations have been underway for more than a year.

Nurses were on the picket lines for 24 hours, starting 6 a.m. on Wednesday and returning to work this morning. Managers from other Kaiser facilities staffed the hospital, along with some agency nurses. The patient population dropped to one-quarter of the usual 800 in anticipation of the strike.

The bitter contest between the two unions continues, as NUHW is currently seeking a fresh election in Kaiser’s largest bargaining unit of 45,000 service and technical workers. The new union argues that SEIU won last summer’s contest because of widespread intimidation and heavy support for SEIU by the employer.

Nurses like Aberg were drawn into the fray as well after Kaiser denied them previously agreed raises and professional development funds last spring after they left SEIU for NUHW. After NUHW took Kaiser to the labor board and won, those funds were restored last month.

“Kaiser has always been an SEIU fan,” Aberg argued. “They don’t like our union because we’re not just going to go with the flow. It’s not what we’re about—we’re going to fight for our needs.”

Despite these clashes, Aberg reported strong support as the nurses maintained a boisterous picket line throughout the day. SEIU members even joined NUHW picket lines.

“We’re feeling a lot of solidarity at the rank and file level,” he said.

NUHW has never had anything to offer but for Sal's ego. Unfortunately he found a few vulnerable people at the height of the worst recession since the depression to take advantage of, and confused the rest by taking over the UHW name and putting an N on the front. it was hard to tell which one was which for lots of folks, and the viciousness of those who were at the root of the problem was undeniable.

Strike is in order, but don't follow Sal. He will lead us down a long and winding road to hell.

NUHW may have organized many workers, but they have yet to nail down a contract at a single facility at Kaiser or anywhere else. Many of us at Kaiser are fed up and wish to return to SEIU. NUHW has been nothing but a disappointment.