Immigration Reform Movement to Obama: Make the Change You Promised 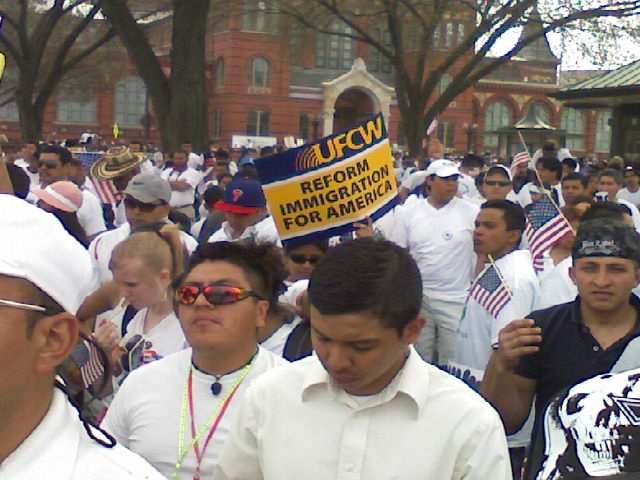 The first day of spring saw activists turn out to push Congress and President Obama to reform immigration law this year. The crowd was one of the biggest marches on the National Mall since Obama took office. Photo: Enku Ide.

The hope was for 100,000 people to get to D.C. for yesterday’s "March for America." But the first day of spring saw at least that many activists turn out to push Congress and President Obama to reform immigration law this year. The crowd surpassed organizers’ expectations, with estimates ranging around 150,000, one of the biggest marches on the National Mall since Obama took office. Unions and worker centers were out in force among the mostly Latino crowd, joined by Black and Asian activists busing in from around the country.

Several hundred organizations coordinated the convergence on the Mall, animated by Obama's still-unfulfilled campaign promise to prioritize immigration reform. Many in the crowd have rallied for months around the Gutierrez bill, named for the Democratic congressman from Illinois who has proposed an "earned path" to citizenship for 12 million undocumented people.

Others came to the rally critical of the bill, saying it contains troubling elements including the E-Verify system and a stepped-up militarization of the U.S./Mexico border.

Though the tightly packed crowd roared when Gutierrez took to the podium, efforts to reform immigration law will begin in the Senate, where Senators Chuck Schumer and Lindsey Graham have put forth a bipartisan framework for reform. Speakers throughout the day included the Reverend Jesse Jackson, Princeton Professor Cornel West, and a long list of luminaries from Asian, Latino, and Black civil rights organizations. While they were careful not to attack Obama, they echoed the crowd's urgency: marchers want a legislative timetable for the new law, and an end to empty rhetoric.

Where was Obama? His face flickered on a pre-recorded, English-only video presented to the crowd. Before Obama came on, TV personality-turned-pundit Geraldo Rivera got the crowd riled up with an emotionally charged story of anti-immigrant hate crimes. Still, the president received a tepid response.

Obama promised little and offered few details, but did support passing a bill this year. He got behind the Schumer/Graham framework, not the lengthier, more comprehensive Gutierrez bill.

The senators’ blueprint has elements that play to nativism by calling for mandatory biometric identity cards for all workers, stronger enforcement and security language, and a guest worker program biased toward importing highly educated immigrants instead of blue-collar workers when allotting visas. The bipartisan legislative reform outline, says Chicago activist Jorge Mujica, has "lots of ‘tough’ but nothing on 'fair' legalization."

Many assembled in D.C. framed the battle over immigration as a continuation of the civil rights struggle—and they say it needs to begin with a reversal of punitive Bush-era policies. Chung-Wha Hong, director of the New York Immigration Coalition, says Obama continues to enforce laws "that tear families and communities apart, and that contradict to the core the president’s stated commitment to reform." The D.C. marchers returned home with as many questions as answers, resolving to keep the pressure on. "We’re getting ready for May Day," says Mujica.

Related
Pandemic Discrimination Against Asian Americans Has Long Roots »
Viewpoint: A ‘Union’ That Pushes to Deport People Is the Labor Movement's Opponent »
Corona Capitalism in Honduras »
Poultry Workers and Allies Organize in the Wake of Anti-Immigrant Raids »
From the Archives: Immigration Raids Make Latino Workers the Enemy »

And we should still believe in their campaign, promises?