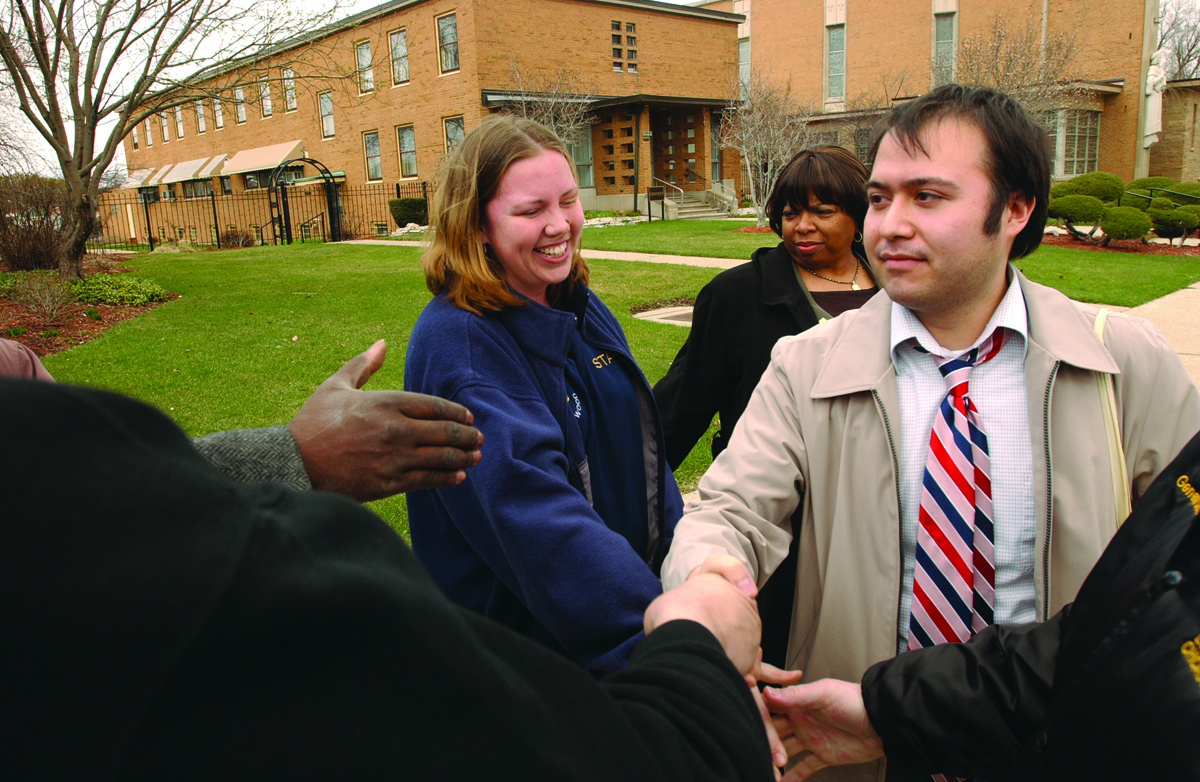 It’s an oxymoron no longer: charter schools are unionizing.

Although the schools run primarily on public dollars—and Illinois allows public sector employees to unionize by card check—management rejected cards signed by 75 percent of employees in April. The charter operator argued that its unelected board of directors was not “responsible to public officials or to the general electorate.” CICS forced a Labor Board vote, battling for two months until workers voted 73-49 to unionize anyway.

When he championed charters as labs of educational innovation, former American Federation of Teachers(AFT) President Al Shanker thought they’d be organized. Two decades later, nearly all charter operators—despite varied teaching methods and missions—agree on one thing: teachers should be non-union.

Teacher unions now acknowledge charters have become a fact of life, and few would argue against organizing their teachers. But debate rages over how, and whether, to manage charters’ spread.

The AFT says charters work when they’re teacher-driven schools that share innovations with district schools, when the public can exercise oversight, and when teachers can join unions.

The schools have not succeeded by these measures but continue to expand, especially in urban districts. So that’s where the AFT is concentrating attention, picking up wins in Florida, Philadelphia, New York, and Los Angeles.

Instead of fighting tooth and nail to undermine charters, which have steadily chipped away at union ranks and siphoned off public dollars from traditional schools, the union has committed itself, even if belatedly, to organizing their tens of thousands of teachers.

They’ve got their work cut out for them: only around 80 of 4,600 charters are organized nationwide.

In Chicago, teachers began to see their vulnerability to the boss’s whims as a flaw in the school’s educational model. At Northtown High School, workers called meetings when the school’s former CEO—who had no background in education—announced instructors would teach an additional class but be paid the same.

And instead of summer school, teachers would instruct failing students during night school. “If we didn’t like it, they basically told us ‘there’s the door,’” said Emily Mueller, a Spanish teacher.

Teacher turnover was high: “at will” employees were quickly booted, and other teachers simply left, overworked, underpaid, and kept at arm’s length from many curriculum decisions. The founding core of teachers dwindled. At Ellison High, only six of 20 teachers returned to the classroom last year.

To squelch the organizing drive, CICS used both stick and carrot. Two members of the school’s board, lawyers at a Chicago firm specializing in “union avoidance efforts” for groups “whose business is education,” came in with another anti-union consultant to fight the drive.

CICS made nice, too, hiring a new CEO who reversed the class load increase and reinstituted summer school, but opposed the union, calling it a threat to school autonomy—presumably his.

Most teachers had set their sights beyond immediate management regardless. “This drive was about creating a culture in our school where teachers will stick around for years, and have a formal voice in our school no matter what CEO comes along,” Mueller said.

In talks beginning this summer, teachers seek higher wages (entry salaries are several thousand dollars lower than district teachers’) and due process (but not the formal tenure system that exists in district schools), hoping that both help retain committed teachers.

They also want more control over curriculum, but making fundamental changes could be tough. Teachers at CICS are told to prep students on specific parts of standardized tests, which comes at the expense of basic educational needs—like supplies for other classes.

“I was told I’m not a social science teacher, I’m a reading teacher,” says Ellison teacher Jennifer Gilley. “It’s ironic because I taught three classes and only one of them came with a book.”

A TEACHER IS A TEACHER

The Chicago Teachers Union, AFT Local 1, has a conflicted relationship with the charters. Union reps were on hand last spring when charter teachers presented cards to their CEO, and CICS teachers received a warm reception from CTU delegates for breaking into non-union territory.

But a reform grouping within the CTU, the Caucus of Rank and File Educators (CORE), is raising a ruckus.

“If you’re organizing the charters without taking a position on defending existing schools against charter proliferation and expansion, that’s a failed strategy,” says Jackson Potter of CORE.

CORE is targeting Secretary of education Arne Duncan, whose nationwide tour sailed through Chicago in June. He’s offering urban districts additional federal money if they give the mayor executive control over schools, extract concessions from teacher unions, and allow charters to expand.

The strategy is straight from Duncan’s tenure as CEO of Chicago Public Schools, where he hatched a plan that has closed nearly 70 neighborhood schools and established charters in their wake, promising to raise student achievement.

Five years later, a Stanford University study shows a majority of charter schools performing worse than or comparable to traditional public schools on standardized tests. Some in the AFT are calling for a moratorium on charters.

With strong parent and student involvement, CORE rallied to save six district schools from the gallows last winter. But other schools close, and charters keep opening in them—erasing the elected decision-making committees of students, teachers, and parents at each site.

A University of Chicago study—which Duncan’s corporate backers allegedly tried to suppress—shows the city’s charters under-serving special education students and English-language learners. And because of limits on enrollment, many kids are left without neighborhood school.

Just as teachers won at CICS, the Illinois Federation of Teachers negotiated a state law allowing 45 additional charters to set up in the city. Though they constitute only 3 percent of publicly funded schools nationwide, charters are 10 percent in Chicago, a share that will now rise again. IFT inserted provisions that beef up oversight of charters and allow charter teachers to organize under the state’s card-check provision for public employees.

The AFT’s organizing pitch is finding a growing audience among charter teachers, says Hugo Hernandez, an AFT staffer. The way to affect charters’ impact on education, he argues, is to bring them into the union. “If they would open the doors, we could find out what’s happening in these schools,” he said. “And to do that, we’re organizing.”

CORE wants the union to defend neighborhood schools and slow charter growth, but with the bludgeoning of teacher unions in the media, AFT is reluctant to fight Duncan’s strategy, which also has the blessing of the Obama White House.

Meanwhile, Chicago teachers—who’ve seen a 6,000-member drop in a decade—are bracing for another wave of non-union charters crashing into neighborhoods. “Perhaps they’re bargaining from a position of weakness,” Potter said of union leadership. “But that weakness is going to mean the end of us all before too long.”

Related
Why (and How) Michigan Nurses Rebuffed a Raid on Our Union »
Teachers Strike against a ‘Heartless’ School Board in Biden’s Hometown »
As Strike Looms, UC Lecturers Raise the Stakes »
Michigan Nurses Defeat AFT-Backed Raid »
Viewpoint: The AFT Shouldn't Be Negotiating Away Puerto Rican Teachers' Pensions »

Brian -
I wonder why there was a 15 percent drop from the card signing to the vote. Is it possible that your aggressive attitude had anything to do with it?

Hi,
I am part of the CICS/Civitas union. We certainly didn't set out intending to be pioneers or advocates for charter school unions. In fact, I'd take a guess that most of the teachers are actually anti-union, ironically. If a business (yes, a Charter school is run by a business) simply treats its employees fairly, there really isn't a need for a union. Our schools wanted to be treated fairly; we wanted a way to express our ideas and concerns without fear of risking our jobs. Had we been treated fairly from the get go, our schools would not have unionized.

In August of 2008, the former CEO told us our GPA's were too low and we needed to fix that. At that same meeting, we responded with a very simply solution: quit penalizing our Basic track students with lower point values (an A in a Basic class is a 3.5, not a 4.0). We said that her concerns for GPAs would disappear if she simply put the Basic level students on the same GPA scale as the regular level, Academic students.

In October or November of 2008, we were told failure is not an option and it was implied over and over again that we were NOT to fail students or give even give them a D. Only A, B, and C grades were considered passing. We were instructed to allow students to retake EVERY assignment, quiz, and test until they could pass it.

By February of 2009, everyone was well aware that grade checks were being run to see who had the most F's. It was very clear that our "merit" increases and rehiring would be based on our failure rates.

As of today, July 23, 2009, our GPAs are still low. Why? Because Dr. Nelson NEVER took our advice seriously. She never considered that penalizing a student who is in a Basic class (who needs serious foundation skills and extra help) by lowering his/her GPA would hurt the average GPA of the high schools. When 20% of our school is special education students, what track level do you think those students typically fall into? Our Basic level students are still being penalized every day for needing extra help and support.

When you treat your employees like they are idiots because they don't have a Doctorate in Bad Policy Making, then what do you think will happen? Either the teachers will walk out and never return, or they will fight back.

We weren't looking to create history. We were just looking for a fair shake.

I don't understand how you can say that most of our teachers are anti-union when 75% of them signed union authorization cards and 60% of them voted for a union after a weeks-long union-busting campaign where we were repeatedly told by our boss that a union would destroy the school.

That seems like pretty solid support for a union to me!

Enjoy the rest of your summer.

I meant anti-union in theory, not in this particular instance. In other words, CICS/Civitas pushed people who are typically not union supporters INTO unionizing.

Obviously you know how bad they treated us; I'm just saying, people need to realize that when you can make people who are typically not in favor of unions UNIONIZE, something went wrong in CICS/Civitas' policy of treating their employees. When you treat your employees fairly and with respect, there is no need to bring in a legal voice. But when you fail to respect your employees, treat them unfairly, and let them know they are easily replaceable, then you have no one to blame but yourself when the employees unionize.