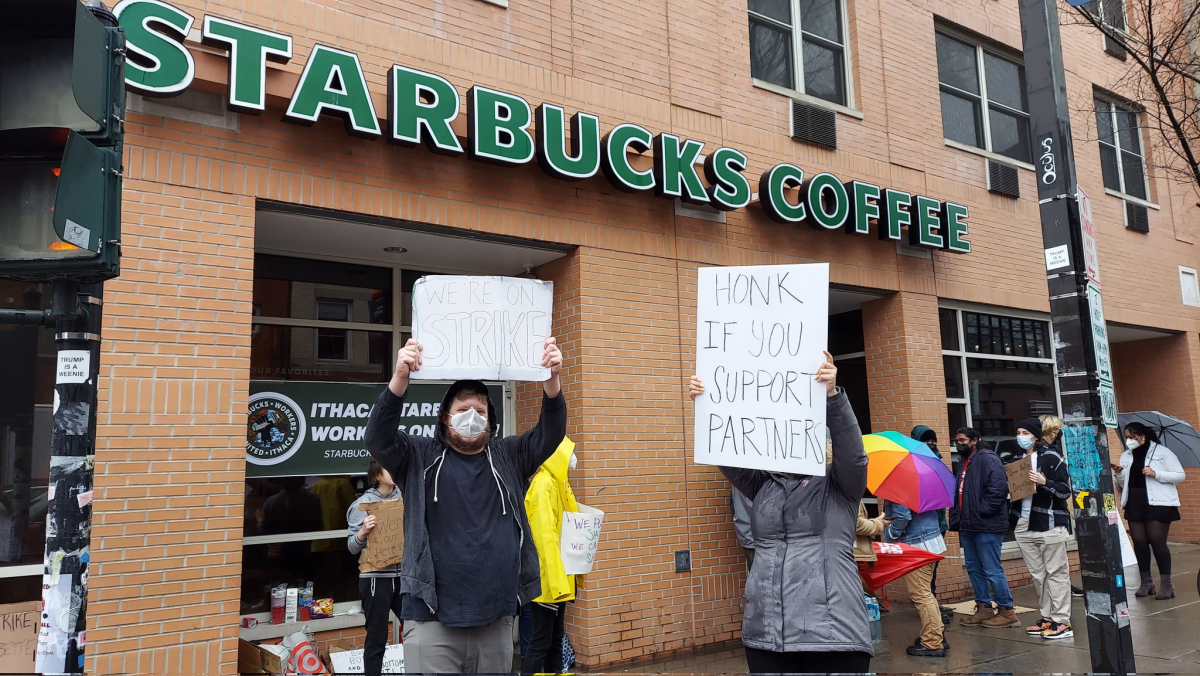 Starbucks workers in Ithaca, New York, struck on April 16 over what they say are unfair labor practices meant to drive union supporters out of their jobs. Workers in several other cities, including Denver, Overland Park, Kansas, and Buffalo, have also struck over issues such as the firings of union activists, understaffing, cuts to hours, and spying on union supporters. Photo: Starbucks Workers United Twitter.

So far, over 200 Starbucks stores across the country have filed for union elections, with 25 of the 27 that have voted so far choosing to join Starbucks Workers United. That includes the union going five for five yesterday in elections at stores in Richmond, Virginia.

Starbucks has responded to the organizing campaign by firing a growing number of union supporters over spurious charges. In Raleigh, North Carolina, days before her store was set to vote, barista and organizer Sharon Gillman was fired for “misuse of company property”; a dishwashing sink fell off the wall while she was using it.

In Ann Arbor, Michigan, shift supervisor and union supporter Hannah Whitbeck was fired April 11 for leaving a barista in the store unattended for 10 minutes after she clocked out of her shift. Starbucks alleged she was “in violation of safety and security standards” and failed to communicate adequately.

Laila Dalton, a union leader in Phoenix, predicted her own firing on Twitter before it happened, when she was notified that two District Managers would be visiting her store that day.

In Buffalo, where the union drive began, Danny Rojas is the latest to be fired, following the firing of Cassie Fleischer, which the company denied in a note sent to workers across the country, only to be contradicted by Fleischer’s own recording of the meeting.

In early April, a National Labor Relations Board regional director said the agency would issue a complaint against Starbucks over the illegal firing of the “Memphis 7,” seven workers who were terminated in early February in the midst of their organizing drive.

The company is also reorganizing its top personnel, with former CEO Howard Schultz returning to the top spot. In an all-staff meeting, Schultz claimed that “companies throughout the country [are] being assaulted, in many ways, by the threat of unionization.”

The company’s top lawyer, Rachel Gonzalez, is also stepping down; the company posted job listings for a new lead lawyer to head up “labor relations strategies.” The company says it's looking for someone with “significant experience managing… strike contingency planning.”

Outgoing CEO Kevin Johnson got $60 million from the company on his way out the door; Gonzalez will be collecting $8 million as she leaves.

Meanwhile, Starbucks workers aren’t waiting for the NLRB to issue rulings or tally ballots to fight for their rights on the job. Workers in several cities, including Denver, Seattle, Overland Park, Ithaca, and Buffalo, have struck. These have been not just over the firings of union supporters, but also over issues like understaffing, cuts to hours, and spying on union supporters.

One of these is the first store to unionize, Elmwood Avenue in Buffalo, which has been in bargaining with the company since January 31. They’re pushing for just cause, better health and safety provisions, and better wages and benefits, including giving customers the ability to tip on credit card purchases.

A version of this article ran in Labor Notes #518. Saurav Sarkar contributed reporting to this story.