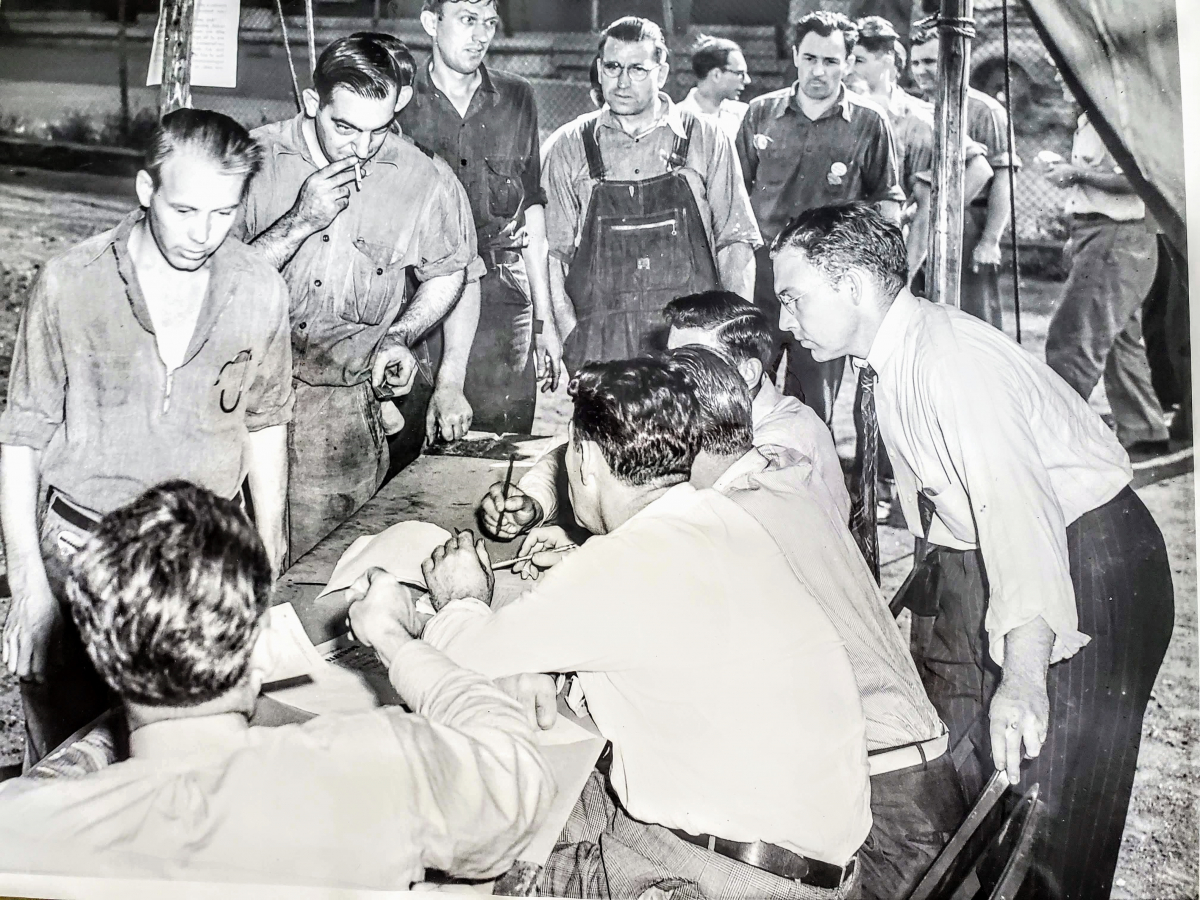 In 1941, 90 percent of the 6,000 employees at International Harvester's McCormick Works turned out for the plant's first National Labor Relations Board election. The Farm Equipment Workers-CIO scored a narrow victory, winning 52 percent of the vote. Photo courtesy of Toni Gilpin.

The results of the recent unionization election at Amazon’s Bessemer facility were, to put it mildly, disappointing: 738 votes in favor of the union; 1,798 against; with turnout (perhaps as significant a marker) lackluster at just over 50 percent. Many people have weighed in with analyses of what happened and what this might mean for future organizing. (For the lead organizer's reflections on the campaign, see the recent interview published by Labor Notes.—Eds.)

As a labor historian, however, my reflections about the significance of the Amazon vote focused considerably on what led to union successes—and failures—in the past. Here are some of my thoughts:

1. Amazon did everything it could to stymie the union drive; no surprise there. That’s what capitalists do and any organizer who expects, or hopes for, “fair” treatment should find another line of work. (Which is not to say that unions shouldn’t use every opportunity to expose corporate duplicity and inhumanity.) But we should remember that whatever Amazon does to coerce or intimidate its employees pales in comparison to what employers in previous eras were able and willing to do, up to and including murder.

Tom Girdler at Republic Steel amassed a private arsenal that dwarfed the civil defense resources of many major cities (though the Chicago police did the killing at the Memorial Day Massacre, allowing Girdler to preserve his ammunition). Ford and General Motors employed networks of company spies and vigilantes who ensured that organizers were beaten and fired, and blacklists guaranteed that they couldn’t find employment anywhere else.

International Harvester, opting for the velvet glove over the iron fist, introduced company unions back in 1919 (an elaborate embodiment of the corporate argument that you shouldn’t waste money on dues since management is always willing to hear your complaints) and pioneered the sorts of pressure tactics—letters home to employees condemning union leadership, captive-audience meetings, rewards to “loyal” employees and bad jobs for union supporters—that companies rely on to this day.

Yet despite the raw power those corporations possessed—Jeff Bezos is a piker compared to the tycoons of yesteryear—workers organized and won. Amazon too can be overcome.

2. But there are important distinctions between then and now. There was a general climate for unionization in the 1930s and well into the post-WWII period that I don’t think exists here at this moment, at least not yet.

The passage of the Wagner Act was just one manifestation of that, and if the PRO Act is passed perhaps it will demonstrate an increasing appetite in this country now. But in the Depression there was a greater sense of working-class identity (not necessarily consciousness, in the Marxist sense); workers at GM knew they were part of a cohesive group, distinct from that of their bosses, in a way I don’t think Amazon employees (on the whole) or American workers generally recognize now.

And despite the overall low level of unionization in the pre-Congress of Industrial Organizations (CIO) period, once organizing heated up in the 1930s workers were hearing directly from other workers about the power of solidarity: many early CIO advocates were skilled laborers who had been in craft unions, or immigrants who carried with them union traditions from elsewhere, or coal miners who had migrated north to take factory jobs (within the Farm Equipment Workers, for instance, the subject of my recent book, former coal miners were key leaders in nearly every local). Many younger workers then had parents or other relatives who kept alive union traditions stretching back to the 19th century. I don’t think any sort of comparable labor culture exists now.

3. On the other hand, the CIO unions that emerged in the 1930s were blank slates, which proved pivotal among African Americans and other crucial constituencies. The CIO promised a clean break from the AFL’s conservatism and racism that had for so long alienated Black workers and undermined organization.

These days, unions are again (or perhaps more correctly, are still) tainted by racism and sexism, not to mention serious corruption and ineptitude. (That all unions tend to get painted with the same broad brush may be infuriating but isn’t surprising.) These problems can’t be explained away as mere corporate propaganda; they need to be confronted head on, as they pose a genuine impediment to convincing workers that unions have something to offer them.

John L. Lewis dealt with the AFL’s entrenched reactionaryism by creating a whole new host of unions that would follow a rewritten rule book; I am not suggesting that such a momentous shift is now feasible or desirable, but at the least the current labor movement needs to clearly demonstrate a break with the old ways of doing business (like hey, United Auto Workers officials, if you believe in democracy then the members ought to be able to elect their leaders).

4. Both points #2 and #3 mean that we cannot presume that if only somehow companies like Amazon could be kept from browbeating their employees (which is never going to happen anyhow) that then workers would immediately flock into unions.

The sitdowns and the general strikes that occurred in the 1930s involved a good deal of spontaneity, but the CIO breakthroughs in auto, steel, farm equipment, meat packing and other industries also reflected hard-fought organizing that had been ongoing for decades at least. And while we rightly celebrate those historic victories, we need to recall that even then, in the midst of Depression misery and the face of a seemingly inexorable CIO tide, union support was far from unanimous and in some of those first National Labor Relations Board elections the margins of victory were razor-thin.

Many workers then were fearful—see point #1—but others were opportunistic, as management, then as now, offered carrots as well as sticks, in the form of outright bribes, or promotions, better schedules, and cushier jobs. Some bought into paternalistic indoctrination that business elites—not "outside" labor organizations—had the best interests of their workforce "family" at heart. Still others carried their own racial or ethnic animosities and resented the CIO message of solidarity.

There was nothing automatic then, and there won’t be now, about union support within the working class. Organizing is painstaking and never-ending.

UNIONS WERE POWERFUL, NOT ‘POPULAR’

5. Relatedly, I’ve seen the frequent references to polls showing that unions are more popular now than they’ve ever been, or whatever. But that’s in part because, I think, so few people now are in them.

When the labor movement was at its most powerful, in the 1940s and ’50s, unions were not necessarily “popular”—they were feared. Lots of people—not just apex capitalists, but most members of the small business and middle class, professionals, white collar workers, etc., Republicans and Democrats alike—saw organized labor as a threat. Jimmy Hoffa and Walter Reuther were deemed by much of the media to be dangerous and too powerful, albeit for sometimes different reasons.

We don’t need a labor movement that’s well-liked to organize Amazon; we need one that scares the bejesus out of the ruling class and its hangers-on. I think we’re a long way from that at the moment, but nonetheless I reiterate what I said in point #1, and that is that such great leaps forward have happened before, and against much more formidable adversaries than Jeff Bezos, however invincible he now fancies himself to be.