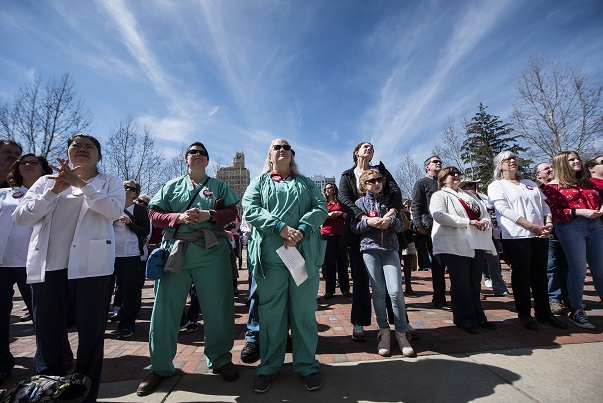 UPDATE, September 18: In a mail-in ballot election, registered nurses at Mission Hospital voted 70 percent in favor of joining National Nurses United. It’s the biggest hospital union victory in the South since 1975 and the first-ever election win for a union at a private sector hospital in North Carolina. NNU will represent 1,800 registered nurses at the hospital.

Nurses in the Appalachian mountains of North Carolina filed a petition in March to form a union with National Nurses United. Roughly 1,600 nurses are expected to be eligible to vote.

Despite the challenges of the coronavirus pandemic and a relentless union-busting campaign that has delayed the election, nurses at Mission Hospital in Asheville say they are on the brink of a historic labor victory in the country’s second least unionized state.

“If it happens in North Carolina, it can happen anywhere,” said Trish Stevenson, an emergency room nurse.

The union drive pits workers against HCA Healthcare, the nation’s largest hospital corporation with 184 hospitals in the United States and the United Kingdom. In February 2019, HCA paid $1.5 billion for Mission and six other nonprofit hospitals in the bucolic mountains of western North Carolina.

NNU currently represents about 10,000 nurses at 19 HCA facilities across the country. The union drive at Mission is NNU’s largest campaign ever undertaken in North Carolina.

In the wake of the takeover by the multinational corporation, nurses saw patient care standards and working conditions quickly deteriorate. Four nurses initiated the union drive in May 2019 over cuts in staff, poor communication, and lack of access to basic supplies and personal protective equipment.

“I am one of the older people on the unit,” said Kelley Tyler, a trauma care nurse. “A lot of the nurses at Mission are younger and new. They were taking it as this is how the job is supposed to work and this is how nursing is.”

As a newly graduated RN in 1985, Tyler was told not to talk about unions at Mission, or face firing. Now she tells her co-workers that the union is their best chance to take back control over their practice or have any kind of voice in how things are run.

“They just had no idea that things weren't supposed to be the way they are running right now.”

Tyler knows that she herself will one day seek care at Mission Hospital.

“I want [the union] to go forward because I'm going to need those services in the next 10 or 15 years when I'm elderly. I'm going to have grandchildren born in that hospital. I really need the newer nurses to have a voice and to speak up and say when things are not safe,” Tyler said.

She said unionizing would enable her and her colleagues to get back to being nurses instead of scrambling to put out fires all day. It’s all she can do to respond to emergencies, let alone give baths or brush teeth.

“We don't have the time or energy for that anymore,” Tyler lamented. “We're failing the patients.”

HCA is fiercely anti-union. In A Collective Bargain, organizer and author Jane McAlevey notes that the majority of HCA Healthcare facilities are in right-to-work states like Tennessee and Florida.

“This isn’t an accident,” writes McAlevey. “It’s part of HCA’s strategic plan to operate in states with weaker union laws in order to profit off cheap labor.”

Nurse Jill Rabideau mourns the loss of the community hospital she was first hired to work at 17 years ago. Coming to work at Mission has become a “moral assault.”

“Our voice got lost in the running of a corporation,” Rabideau said. “[HCA is] excellent at running a corporation, but they suck at providing bedside care.”

Thanks to HCA Healthcare’s antipathy to the union and a Trump-appointed National Labor Relations Board skewed toward employers, the union election has been delayed.

HCA used the pandemic to delay the election at the same time it stood to amass $4.7 billion in federal aid. While Mission nurses braced for an onslaught of COVID-19 patients, HCA Healthcare continued to pay union busters $400 an hour to pull workers off their units for one-on-one meetings.

The NLRB is expected to determine the election date and whether it will be an in-person or mail-in vote in June.

The South has long been a bastion of anti-union sentiment. Throughout the 1930s and 1940s, lawmakers in North Carolina and other Southern states lured unionized industries from the North and Midwest with the promise of a “cheap and satisfied” labor force. Officials used racism, redbaiting, and “right-to-work” legislation to maintain the status quo.

In a state where just 2.3 percent of workers belong to a union—the lowest in the nation alongside South Carolina—the typical Mission nurse lacks experience with unions.

All they know is that things have to change at Mission Hospital.

“We needed a union very much before HCA bought Mission,” said Sarah Kuhl, a nurse with Mission’s oncology research department. “It just became exponentially more important with the changes that HCA implemented. And that was exponentially increased with this pandemic.”

“As long as we're a for-profit entity, there will have to be a core of nurses expending massive amounts of energy and dedication to continue to push back for our patients,” said Rabideau. “We just have to keep the patients at the center of everything, and the only way we're going to be able to do that is to speak collectively.”

Economists are forecasting a major surge in the health care workforce over the next decade. In North Carolina health care has supplanted textiles and tobacco as the dominant industry in many communities. Mission Hospital is the largest employer west of Charlotte.

Jonathan Michels is a freelance journalist and health care worker based in Durham, North Carolina.

Related
Instead of Coal, These Nurses Gave Their Boss 900 Documented Incidents of Unsafe Understaffing »
Whose Safety? Our Safety! »
Steward's Corner: How to Bargain for a Healthy and Safe Return to the Workplace »
Workers Have Leverage. It's Time to Use It. »
New York City Municipal Employees Protest Abrupt Return to Offices »