Auto Reformers Go for Round Two 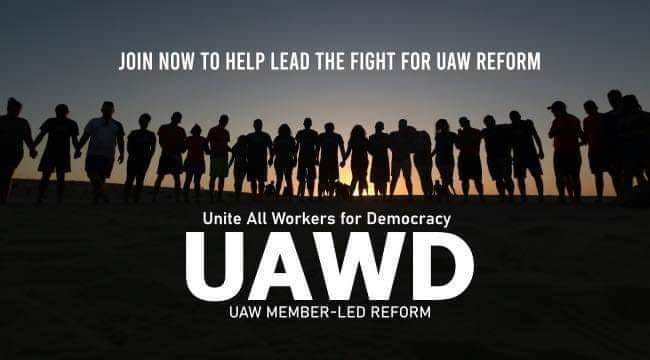 UAW reformers are making another go at passing a resolution they hope will lead to the direct election of top union officers. Image: UAWD

We have good news and bad news.

The good news is that locals representing more than 60,000 Auto Workers (UAW) members have passed the Article 8 resolution calling for a special convention to amend our union constitution and mandate the direct election of top officers. It’s pretty astonishing to see just how quickly momentum built for this effort.

UAW Local 774 was the first local to pass the resolution, on November 22. Over the next four months, 25 more locals passed it, taking a bold step together to demand union democracy.

The bad news is that we fell short of the requirement to reach 80,000 covered members by the February 21 deadline. Not because it could not be done, but because we needed more time. If we only had two more months, it would have happened.

But there is more good news! This deadline was set by us. And we can change it.

Our goal now is to start fresh, learn from the first try, and get it done on the second.

We have a new Article 8 resolution and a new deadline: February 19, 2021. So we now have one year to get this done. And we know we can do it.

Technically all we need is for locals representing more than 20 percent of the total UAW membership—about 80,000 members—to pass this new resolution. But we aren’t settling for the minimum.

Our goal is to have as many locals as possible to pass this resolution over the next year. We want to show the UAW officialdom, the federal government, and one another that the members are capable of running this union.

Also, we want to use that time to grow UAWD. If the UAW is to be transformed back into the militant union that launched the Flint sit-down, championed civil rights, and took on the most powerful companies in the world, then we need to rebuild that fighting spirit—and make sure that it is capable of overcoming the power of the UAW Administration Caucus, the ruling party that has lorded over the union like a one-party state for more than 70 years, bringing us concessions, labor-management partnership schemes, and corruption. We want to limit the Administration Caucus’s influence at any special convention, and that means going in strong and organized.

It’s fitting that UAW Local 249—from the same city as the Super Bowl LIV Champions, the Kansas City Chiefs—has kicked off round two by passing the new version. Local 249 represents more than 9,000 autoworkers, so we are already making large strides toward the goal.

Here are our next steps:

We are asking those who have already passed the first Article 8 resolution to go back to your union meeting and pass an amendment to the resolution.

The amendment should state: “I move to amend the previously passed resolution calling for a special convention by replacing the next to the last paragraph with: Be it further resolved that ballots for the referendum vote on the Special Convention be mailed to Local Unions of the UAW by February 19, 2021. Voting results from the referendum should be returned to the Secretary Treasurer by March 19, 2021. The Special Convention for the above stated purposes be held in Detroit, Michigan on May 24, 25, 26 of 2021.”

We are also asking for everyone who is interested in supporting the rank-and-file-led effort to transform the UAW to become a member of Unite All Workers for Democracy through our website at UAWD.org, join our regular planning calls, and help us to reach out to other local unions to get them positioned to pass the updated Article 8 resolution.

Scott Houldieson is an auto worker in UAW Local 551 and a member of the reform group Unite All Workers for Democracy.