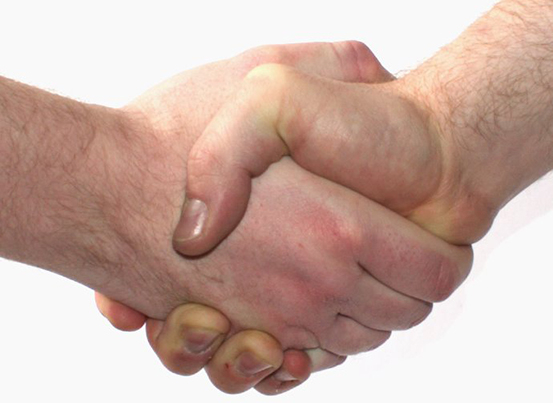 Those in seats of power assume that with enough private meetings, smiles, and soft handshakes we will work things out. Photo: Tobias Walter, CC-BY-SA 3.0, cropped from original.

“Hey, Barbara. This is Arne Duncan. I just wanted to congratulate you on your election victory.”

In 2014, as an insurgent candidate from the Educators for a Democratic Union caucus, I won the presidency of the Massachusetts Teachers Association. Duncan, then Obama’s Secretary of Education, was one of the first congratulation calls I got. The message he left on my phone provoked lots of astonished laughter when I shared it at meetings and in bars.

I won on a platform that called out the Obama-era education reforms for undermining public education in the name of privatization. Duncan, who once called Hurricane Katrina “the best thing that happened to the education system in New Orleans” (because it opened the door to charter schools and privatization), was the man who implemented the policies I was planning to lead the MTA in fighting against.

It was absurd for Duncan to reach out to me—but my time as president taught me that it was not at all surprising.

Indeed, as an elected leader of the largest union in Massachusetts, I found myself with many invitations to meet and cut deals with the very people whose policies the members opposed.

I wasn’t elected to get a better bad deal. I was elected to refuse their deals and reestablish the power of educators, students, and families.

But those in seats of power assume that with enough private meetings, smiles, and soft handshakes we will work things out. They expected me to be swayed by the special relationships in the rooms of power. The statehouse rooms in which we gathered and the limited number of participants in the meetings signaled to me that, as the president, I was special. They offered me faith in their power and our power as the elite.

The grotesque examples of individuals who accept these invitations—such as Andy Stern, formerly of SEIU and now on the board of a Walton-funded, anti-union astroturf organization—can make the rest of us overconfident that we haven’t gone so far in selling out our values.

But the path is slippery. It is all too easy to wander away from commitments to rank-and-file democracy and power.

TALK TO THE MEMBERS

Union structures and expectations contribute to the temptation to overvalue elected leadership. When I took office, the MTA summer leadership institute’s workshop track for new local presidents featured T-shirts that said, “I am the president.” Not “We are a team.” Not “Rank and file rules.”

Even within our progressive caucus there was some magical thinking associated with our having elected the MTA president. For some, winning the leadership meant that with me as president, changes would be instant and wins would pile up, rather than that we now simply had some resources to organize educators, students, and families.

But it was the caucus that kept me grounded in the commitments we shared. They knew me as Barbara, not as the president. Caucus members close to me challenged me any time my talk echoed the assumptions that surrounded me.

Leadership is lonely. A defensive response to the pressures can be to tell yourself and others that you know more than you know, to reach for power inside of yourself, rather than reach out to the members. At an early meeting of organizers to develop plans, one old-time organizer sat in the back and repeated one mantra over and over again: “Barbara,” he said, “talk to the members.”

Because we don’t win as individuals. We win as a collective. New leaders, stitch that into your forehead, backwards, so you can read it in the mirror.

Barbara Madeloni is Education Coordinator at Labor Notes and a former president of the Massachusetts Teachers Association.barbara@labornotes.org
Related
Every Union Contract Right Now Should Be the Best Ever »
UFCW Reformers Look to 2023 »
New Leadership, New Direction in Major Midwest Teamsters Local »
Ballots Are Out in UAW Election, with Contrasting Visions of Unionism Up for Leadership »
Ten Years Ago, Chicago Teachers Gave Us All a Jolt of Hope »