British Academics Strike to Save Pensions

Snow falls on the picket line by the main entrance to Loughborough University, in the English East Midlands. Those not handing out leaflets are huddled around the brazier (burn barrel), hands in their pockets. They include tenured professors, tenure-track faculty, teachers on short-term contracts, academic support staff, and students there to show support.

Spirits are high despite the cold. There might not be drums and chants like at neighboring Leicester University, but there’s still a feeling of solidarity that the snow cannot smother. Most passers-by take a leaflet, and many shout their support through half-opened car windows. Few tell the picketers to get lost.

This is Day Five of a strike by 42,000 academics at 64 public British universities. If the dispute is not resolved, the strike will last a total of 14 days over four weeks. This means lectures and seminars cancelled, emails unanswered, and massive disruption to teaching and research work. 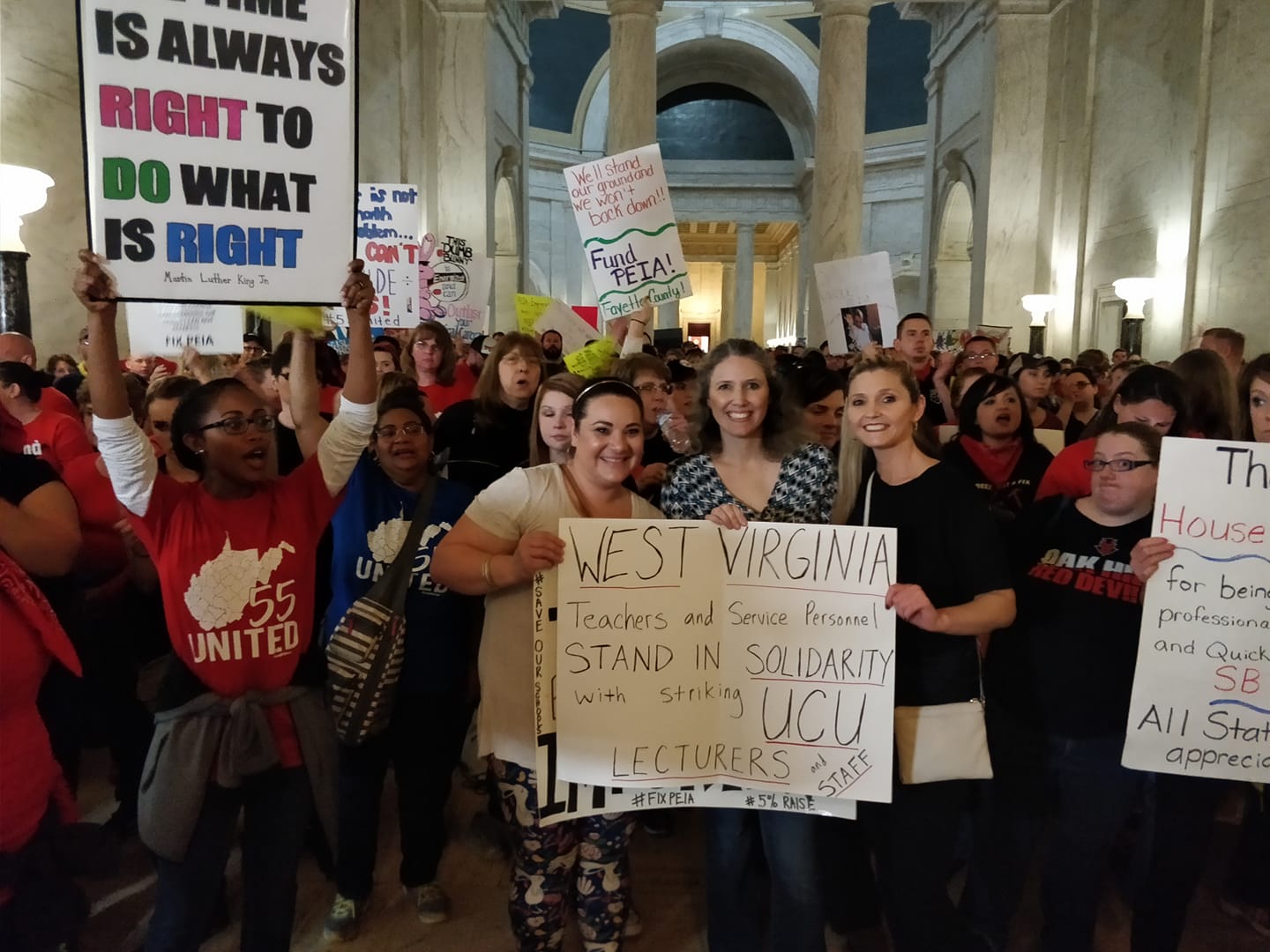 Striking West Virginia teachers sent a message of solidarity to UK lecturers from inside the capitol in Charleston. Photo courtesy of Jay O'Neal

The strike reflects far-reaching changes to British universities. In the popular imagination, academics—tucked away in ivory towers that resemble Hogwarts—lead pampered, unhurried work lives. But the reality of today’s British universities is rather different: low-paid and precarious staff teach students mired in debt.

Students, who paid nothing for tuition until the late 1990s, now pay £9,000 per year ($12,500) for their education. As in the United States, a growing proportion of teaching staff at British universities work on short-term, casual, or part-time contracts. They now account for more than half of all those who teach at universities, up from a quarter in the late 1990s.

Those lucky enough to work on permanent contracts face constant threats to their pay and conditions. In 2017 the threats extended to the University Superannuation Scheme (USS), the pension plan that covers lecturers and academic support staff above a certain pay grade at 65 universities. Those staff are represented by the University and College Union (UCU)—the largest academic union in the world.

Universities UK, the body representing British university managers, claims that the USS is in danger. “Without reform now,” says Alastair Jarvis, the chief executive of UUK, “universities will likely be forced to divert funding allocated from research and teaching to fill a pensions funding gap.”

His reforms would transform the USS from a defined-benefit scheme to a defined-contribution scheme, the kind of change already made to many UK pensions. This means passing risk from universities to their employees—who would receive lower payouts.

UCU also disputes whether the pension fund is really in trouble. “There is an ideological attack being made on a healthy pension scheme,” says David Wilson, negotiating secretary for Loughborough’s UCU branch.

In January, after attempts to find a compromise went nowhere, the union balloted members for strike action at universities that subscribed to the pension scheme.

Members at 61 of 65 affected universities initially voted to strike. After another ballot, three more universities joined them.

Enthusiasm for the strike was high. At my own branch, Loughborough University, 89 percent of members voted to strike, with a turnout of 70 percent.

Turnout had to be high, because new legislation passed by the Conservative government says that a strike can only be called if more than half of members turn out to vote (and a majority approve a strike). For public workers in education, health, the police, transport, and fire, the threshold is even higher: 40 percent of all eligible members must vote in favor of striking.

The only affected university that is not joining the strike, Birmingham, was caught by this new legal framework: while 84 percent of members voted for a strike, turnout was only 48 percent. Academic staff at Birmingham University must therefore stay at work.

Some commentators have already pointed out that if national elections adopted this same “democratic” standard, only a handful of MPs would win enough votes to sit in Parliament. This university strike proves, at least, that determined workers can still take industrial action despite attempts by government to restrict their rights.

Student support will help determine the strike’s fate. Universities now depend on students’ tuition fees to fund much of their research and investment. For that reason, students’ opinions matter more to university managers in many ways than the views of their staff.

Both sides have pitched for student support. Writing in the Guardian on the first day of the strike, Vicky Blake, the UCU’s anti-casualization officer, emphasized the union’s opposition to tuition fees and insisted the union was “firmly on the side of our students.”

A spokesman for Universities UK countered that “this industrial action is targeted at students,” and “it will be young people and the next generation of students who will also suffer if their education deteriorates because employers are forced to make cuts to pay more into pensions.”

So far, it seems that students are siding with the strikers—and not just because they want the chance to sleep off a hangover and skip class. A YouGov poll on the eve of the strike found that 61 percent of students supported it and only 20 percent opposed it. One student at Loughborough explained: “I’m paying them [the university] 9,000 pounds a year and I expect them to treat their lecturers better than this.”

As many as 70,000 students have formally demanded that universities refund their tuition fees for time lost to industrial action. Dozens of students in London occupied the headquarters of Universities UK on the first day of the strike.

Individual universities might also make the difference. Some managers have already indicated that they do not want the proposed changes to the pension plan to go ahead. Robert Allison, vice-chancellor (the highest executive position) at Loughborough University, wrote before the strike began of his desire to keep the USS as a defined-benefit scheme.

Chris Day, of Newcastle University, has gone even further: “I absolutely support staff’s decision to strike,” he wrote in a public statement on day one. “I’m not sure what else they can do to express their concerns.”