Argentina's Teachers Strike, with Fate of Country's Workers in Balance 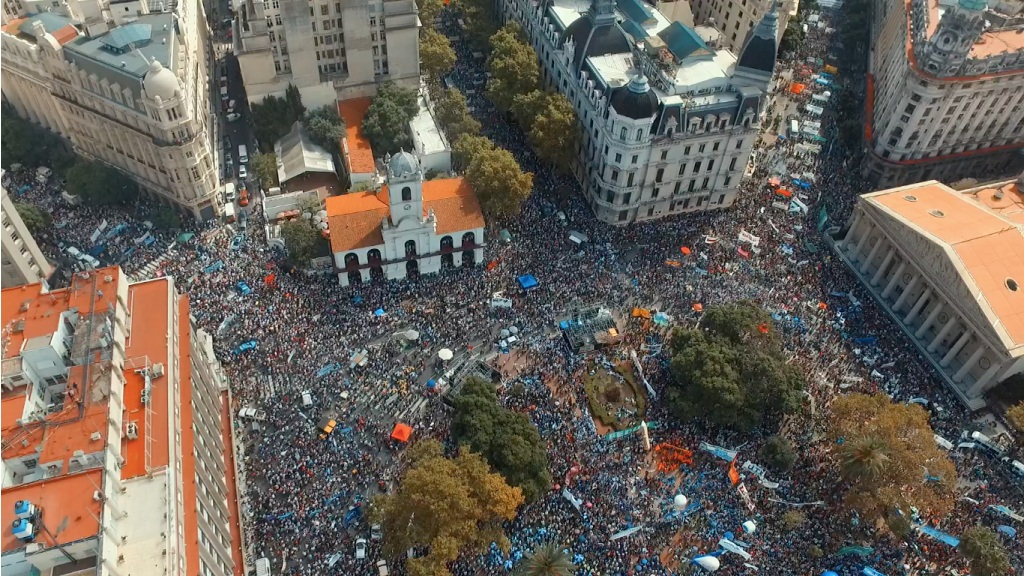 On March 22, more than 400,000 teachers from every corner of Argentina filled the Plaza de Mayo in Buenos Aires for the Federal March for Education. Photo: CTERA

For five weeks teachers in Argentina have been on strike almost continuously, using the days they do go to school to explain to students and parents the reasons for their conflict with the national government. Today, they’re joined by the rest of the country’s workers, in the first general strike under President Mauricio Macri. Strikers are protesting a wave of pro-corporate reforms including subsidy cuts that have led to massive increases in utility bills, exacerbating the country’s growing poverty rate.

Teachers, among Macri’s top targets for attack, have been at the forefront of the mobilizations leading up to the general strike. On March 22, more than 400,000 teachers from every corner of Argentina filled the Plaza de Mayo in Buenos Aires for the Federal March for Education. It was a turning point in the ever-difficult construction of unity among unions, in a country where there are more than 50 teachers unions at the national and provincial levels.

After the purchasing power of wages in Argentina fell by 11 percent in 2016, and with annual inflation optimistically projected at 25 percent for the current year, teachers unions across the country united to demand a 35 percent pay increase. But the pro-business government of Macri, himself a multi-millionaire, is unwilling to grant increases above 18 percent.

The governor of Buenos Aires province, Maria Eugenia Vidal, a member of Macri’s party, has tried to deduct teachers’ wages for every day they are on strike, but was stopped by a judge who ruled that the right to strike protects the workers. Workers have the right to strike in Argentina without loss of pay, though employers often refuse to comply with this law.

Macri’s strategy in his fight against the teachers is to “provincialize” the conflict, that is, to “let each province pay what each of them can pay.”

In late March, prominent Argentine journalist Ernesto Tenembaum revealed a private conversation he had had with the president, in which Macri compared the teachers with the British miners of the 1980s under the government of Margaret Thatcher.

The British miners’ strike was a “test case” for the advance of neoliberalism in the U.K. If workers lost their dispute with Thatcher, as ultimately happened, labor flexibilization and loss of rights would extend to the entire working class. Think Ronald Reagan and the air traffic controllers in 1981.

Argentine teachers are in a similar situation. The fates of the rest of country’s workers are bound up with the outcome of the teachers’ struggle. Already, Argentina’s workers have lost more than 10 percent of their real wage since the beginning of 2016, along with an increase in unemployment.

HOW IT GOT SO BAD

The neoliberal governments of the 1990s deregulated the Argentinean economy, ran up debt to foreign creditors such as the International Monetary Fund, privatized the majority of state-owned assets, discouraged local industrial production, and made labor more “flexible.” Administration of the education system was transferred from the national government to the provinces, but without transferring the resources to finance it.

The result was disastrous: the richest provinces came to pay teachers wages up to 15 times more than the poorest ones could afford, breaking the constitutional principle that establishes equal pay for equal work.

During the economic crisis of 2001-02, many provinces paid teacher salaries with quasi-currencies or bonds because of their lack of money. Some provinces even stopped paying salaries altogether. Towards the end of the 1990s, neoliberal governments were already speaking of “unviable provinces.”

This was the situation in 2003, when President Nestor Kirchner, a progressive, took office, vowing to repair some of the damage done during the neoliberal era. His first measure of government was to shift resources to the provinces where the crisis had hit hardest, in order to boost teachers’ salaries.

Three years later, Congress established legal mechanisms for the national government to send funds to the provinces annually to finance the teachers’ salary base. The institution created by Congress, the National Joint Negotiation of Teachers (Paritaria Nacional Docente), is composed of the national government, the teachers unions, and a council made up of representatives of the ministry of education of each province.

During his first year in office in 2016, Macri followed the institutional mechanisms that guarantee funds to the provinces to pay teachers’ base salary. But at the beginning of this year he decided to ignore this procedure. Education Minister Esteban Bullrich stated that “each province must negotiate on its own with the unions and must offer the salary increase that each can afford.”

This means a return to the situation of the 1990s, but this time by an act that collides with the law. Macri decided to simply ignore the law.

That’s one reason the 400,000 teachers marched to the Plaza de Mayo demanding National Joint Negotiation and a 35 percent raise for all teachers. Teachers say that with the 19 percent increase offered by the province of Buenos Aires, a beginning teacher’s salary would not even cover the cost of the basic food basket that a family needs to stay out of poverty.

The Plaza de Mayo, which fronts the executive headquarters of the government, has been the symbolic center of popular struggles in Argentina since the Independence Revolution in May 1810. On March 24, it was again filled, as 600,000 people demanded “Memory, Truth and Justice” on the 41st anniversary of a military coup. That 1976-83 government left 30,000 people disappeared and murdered, many of them workers and union activists, including teacher leaders such as Isauro Arancibia and Marina Vilte.

In a climate of growing social conflict, the government is betting on a strategy of delegitimizing unions, threatening their leaders, and waging judicial attacks on them.

Attempting to “de-nationalize” the teachers’ conflict, state media and privately-owned right-wing media outlets like La Nación and Grupo Clarin, as well as Governor Vidal, began a smear campaign against the leader of the teachers union of Buenos Aires province (SUTEBA), Roberto Baradel, who has since received a series of anonymous death threats against himself and his family.

To complete the picture, in his opening speech of the legislative year before Congress, Macri left his planned script to leak a sudden message in front of the television cameras: “Baradel does not need any protection from the state.” It was a simple and plain mafia-style threat in the midst of a president’s institutional address.

Another of Macri’s strategies is legal persecution of unions. In the last month, the government has taken legal action to remove recognition of the militant Buenos Aires Subway workers union and is threatening to do the same to the teachers.

The president’s remarks have also pointed darts toward public education itself. Macri has shown off the results of a series of “tests,” which lacked any methodological rigor, to claim that “the performance of the students at the schools under state management is much lower than the students of privately-run educational establishments.” All schools in Argentina are publicly financed, but as in the U.S. with charter schools, some are privately managed.

This affront to the educational community is part of an ideological offensive to back up the official policy of defunding the public education system which was rebuilt during the Kirchner governments between 2003 and 2015.

What Macri ultimately wants to do is to turn education into a commodity, in a country with a strong tradition of secular, egalitarian, and public education. All five of Argentina’s Nobel laureates are graduates of public schools. Macri is the first Argentinean president who never went to a public school on any level.

Upward mobility has always been linked, since the arrival of poor European immigrants at the beginning of the 20th century, to free access to education. For Macri, on the other hand, the correct model is the Chilean or parts of the American system: private institutions, education as a commodity, no possibility of access to higher education for the lower classes, middle-class families deeply indebted for college.

Successive military dictatorships have always attacked the public universities; Macri continues with this privatizing tradition but extends the attack to the entire public education system.

The Federal March for Education was a response to this affront. On some protesters’ banners—as well as on the doors of not a few public education establishments—one could read: “We have not fallen into public school; rather we have chosen it.”

Another read: “Macri: The only thing that falls in the public school are the roofs, because the government won’t give a budget.”

And a third read: “A teacher who fights is also teaching.”

In spite of all the government and media attempts to discredit the teachers’ struggle and to pit the rest of society against the teachers, the public is gradually understanding the most immediate reasons for the conflict. Teachers have not spared creativity, time, and effort to explain the justice and dignity of their claims. They know how.

What is at stake far exceeds a simple wage or sectoral issue. Through his “warning to the teachers,” Macri’s neoliberal government seeks to defund the public education system, cut the wage bill of the country’s workers (who before Macri took office had the highest wages in Latin America), infringe on labor rights and collective bargaining, and ultimately weaken or destroy the country’s unions.

For all these reasons, teachers demand: