Food Workers Puzzled over Andrew Puzder for Secretary of Labor 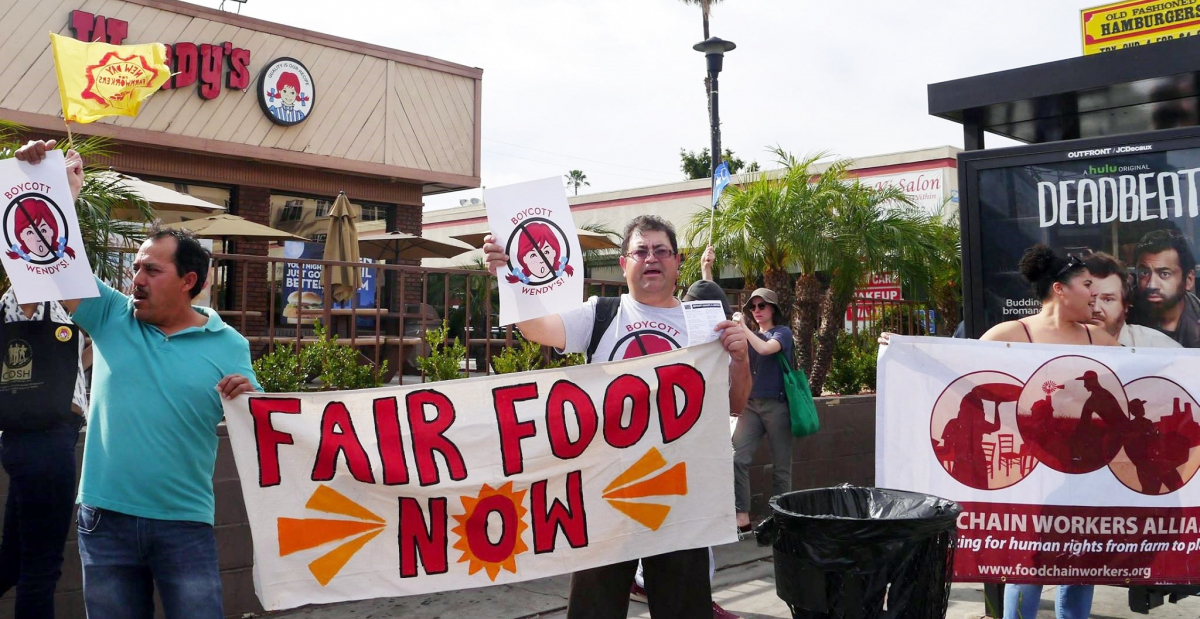 Secretary of Labor nominee Andrew Puzder is the CEO of the company that owns the Carl’s Jr. and Hardee’s fast food chains. In several ongoing Department of Labor complaints, he would essentially be prosecuting himself. Photo: Food Chain Workers Alliance

“They’re always polite, they always upsell, they never take a vacation, they never show up late, there’s never a slip-and-fall, or an age, sex, or race discrimination case.” That’s Andrew Puzder, Trump’s nominee for Secretary of Labor, praising the advantages of employing robots over human beings in an interview with Business Insider last year.

His nomination betrays Trump’s promise to improve the lives of working people. The Secretary of Labor is supposed to stand up for workers. It’s not a job to hand to someone who has a long history of ripping them off .

Puzder is the CEO of CKE Restaurants, which owns the Carl’s Jr. and Hardee’s fast food chains. His nomination is a direct conflict of interest. Although he has promised to divest fully, he is still party to several ongoing Department of Labor complaints, where he essentially would be prosecuting himself.

The department Puzder would be heading has cited his companies for numerous violations, including refusing to pay the minimum wage or overtime. Sixty percent of DOL inspections of Carl’s Jr. and Hardee’s franchises found labor law violations.

Puzder has publicly opposed raising the minimum wage to even $10.10 an hour, enforcing overtime rules, and implementing mandatory sick leave. His confirmation would ensure that the interests of the fast food industry would prevail over the needs of hardworking people everywhere—but especially in the food system.

With 21.5 million workers, the food system makes up the largest employment sector in the United States. This includes farmworkers; meat, poultry and food processing workers; food transportation and logistics workers; and grocery store and restaurant workers.

Compared to workers in all other industries, workers in the food chain receive the lowest hourly wages. Because of poor working conditions they’re more likely to rely on public assistance—and are, ironically, more likely to go hungry or not know where their next meal is coming from. The jobs available are usually frontline positions with little room to move up.

While most CEOs are white men like Puzder, food workers are diverse. For every dollar earned by white men working in the food chain, Latino men earn 76 cents, Black men 60 cents, Asian men 81 cents, and Native men 44 cents. White women earn less than half of their white male counterparts, at 47 cents to every dollar. Women of color face both a racial and a gender penalty: Black women earn 42 cents, Latina women 45 cents, Asian women 58 cents, and Native women 36 cents for every dollar earned by white men.

White women earn less than half of their white male counterparts, at 47 cents to every dollar. Women of color face both a racial and a gender penalty: Black women earn 42 cents, Latina women 45 cents, Asian women 58 cents, and Native women 36 cents for every dollar earned by white men. (Read more in our report “No Piece of the Pie.”)

And though Puzder and his fellow restaurant owners at the National Restaurant Association are quick to deny it, restaurant workers face disproportionate rates of poverty, discrimination, and sexual harassment.

Puzder’s nomination has been met with resistance from many fronts, including protests by the Fight for 15 and a letter signed by more than 100 food and farm organizations opposing Puzder as the nomination.

Puzder’s confirmation vote is scheduled for February 16. Before then we need to put as much pressure as possible on the Senate to reject him.

Join us by calling 1-844-612-6113 to reach both of your senators. After you’re connected to one of your senator’s offices, tell whoever answers that you want the senator to vote no on Andrew Puzder’s confirmation as Secretary of Labor.

Here’s a sample script to use when making the call:

Hi, my name is [YOUR NAME] and as a resident of [CITY, STATE], I urge my senator to vote against Andrew Puzder for Secretary of Labor, as he will make workplaces worse.

He has a history of violating labor laws and cheating the people who work at his company’s restaurants out of their pay. He opposes minimum wage and overtime pay increases and continually puts profits ahead of people. He has a history of running sexist ads and demeaning women. He’s not the advocate we need in the Department of Labor. Thanks for your hard work answering the phones!

Jose Oliva is co-director of the Food Chain Workers Alliance and a member of the Labor Notes Policy Committee.

Related
‘It Feels Like We Started a Movement’: Despite Mixed Results in Frito-Lay Strike, Workers Proud They Stood Up »
Frito-Lay Forced Overtime Frustrations Not Limited to Striking Topeka Plant »
'We Want to See Our Families': Frito-Lay Workers Strike Over 84-Hour Weeks, Meager Raises »
Los Deliveristas Speak: How Delivery Workers Are Organizing to Take On the Apps »
Viewpoint: New York’s New Law Covering 67,000 Fast Food Workers Is a Leap Forward for Just Cause for All »