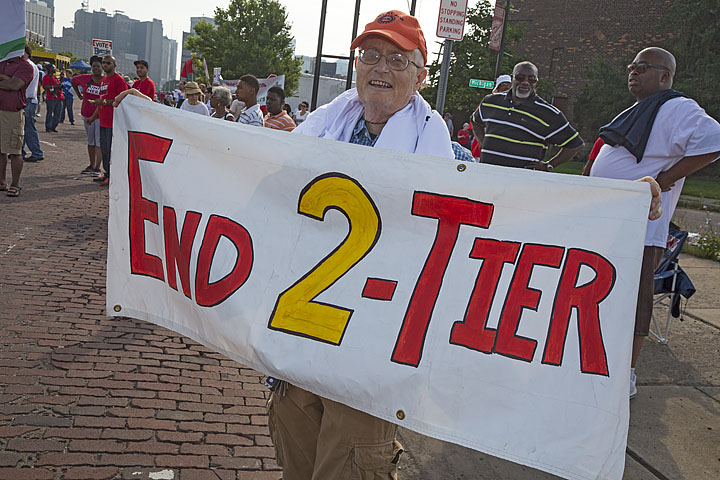 The United Auto Workers just settled a new contract with Fiat Chrysler. Curious why the UAW would choose the target with the least money, Ford retiree Ron Lare collected opinions from current union members at his plant. Photo: Jim West/jimwestphoto.com.

The United Auto Workers settled a new contract with Fiat Chrysler September 15, and local leaders are now learning the details.

The union will try for similar deals at Ford and General Motors. Contracts with the Big Three cover 141,000 workers.

Observers scratched their heads over the union’s choice of Chrysler as the target company, as it’s the least profitable automaker of the three in the U.S. and therefore least likely to offer a generous contract.

Its CEO Sergio Marchionne has been the most vocal about wanting to bring second-tier workers’ wages in line with those of “legacy” workers—presumably by bringing the higher-paid down. Legacy workers make $28 an hour, versus $15.78-$19.28 for those hired since 2007. Chrysler has by far the highest proportion of second-tier workers, at 43 percent.

Chrysler has also paid out far less than the other companies in bonuses and profit-sharing over the current four-year contract, a total of $16,500 compared to $43,200 at Ford and $39,250 at GM.

Bonuses aside, it’s been 10 years since any Big Three legacy worker received a raise. The new contract is rumored to contain raises for both tiers.

Seeking opinions on why the UAW would choose the target with the least money, he texted this question to his list:

“Why do you think the UAW picked Chrysler as the contract ‘target’?” Here are some of the replies:

“Because they are the weakest of the Big Three.”

“The desperate will always give more for less.”

“I suppose the workers r beat down n used to no profit sharing so UAW wants to show the rest of us...Dont expect anything. And now thank us for your jobs.”

“As a company no longer owned by an American entity, they may feel they can set a better precedent for other auto manufacturers here in our country. I would pray that ALL reasoning would be for the betterment of our fast eroding middle class workers who must have the ability to earn as well as spend their hard earned dollars!!!!”

“2 tier pay scale, chrysler wants it gone and so does uaw”

“Chrysler is doing well. Or was. They have a lot of recalls lately, though may be a toss up whether they get a good contract or not. Also, they are not American owned; I don’t know how that will affect the contract either. I think Ford would be the better bet”

“Highest number of T2 employees, and I’m hopeful the goal is to eliminate or make major gains for T2 employees against the least powerful of the big 3 and set a strong pattern for ford and gm. other than that nothing else makes sense.”

“Williams and Marchionne know each other well enough to hug at start of negotiation. They have the most 2nd tier workers, Marchionne said 2nd tier pay not fair, would rather start with weakest company so that Ford and GM will settle for less than if they went to the strongest 1st, remember the uaw’s new role is to help them manage their business. Remember all the stock they hold, conflict of interest.”

“Because the UAW has allowed Chrysler to get out of control with its wage tier system.”

“Since Chrysler has the largest percentage of lower tier workers, if 2 tier is eliminated it might mean union workers paying a hefty deductible for health care & once again forgetting about retirees needs.”

“Chrysler will be a hard target because the CEO has said he wants to eliminate the 2-tiers wage system. He wants all wages to be lower pay.”

“because the ceo already said he wanted to get rid of tiers!!”

“Because two tier will become the new norm that GM and Ford will have to compete with!”

“I’ve been calling UAW officers and can’t get ahold of them.”

“Because of their recalls??”

“Chrysler will get a worse contract and they want Chrysler workers to vote first and not be able to compare their contract to Ford and GM.”

“To eliminate pattern bargaining if Chrysler is difficult and unrealistic.”

“Chrysler has been trying to merge with GM for the last year. They have cash and a large line of credit. Chrysler can grant much larger raises and Chrysler wanted to eliminate the 2 tier years ago. These actions would cripple GM and Ford because they are much larger.”

Jane Slaughter is a former editor of Labor Notes and co-author of Secrets of a Successful Organizer.
Related
Auto Workers Win Direct Democracy in Referendum »
This Year I’m Thankful for the Revolt Against Two-Tier »
'We'll Never Be in This Position Again': Striking Deere Workers Hold Out for Better Deal »
Academic Workers Join Push for One Member, One Vote in the UAW »
'Let's Put a Wrench in Things Now': Deere Workers Strike as Company Rakes in Record Profits »