Transit Irony: The More You Rely on It, the More They Cut 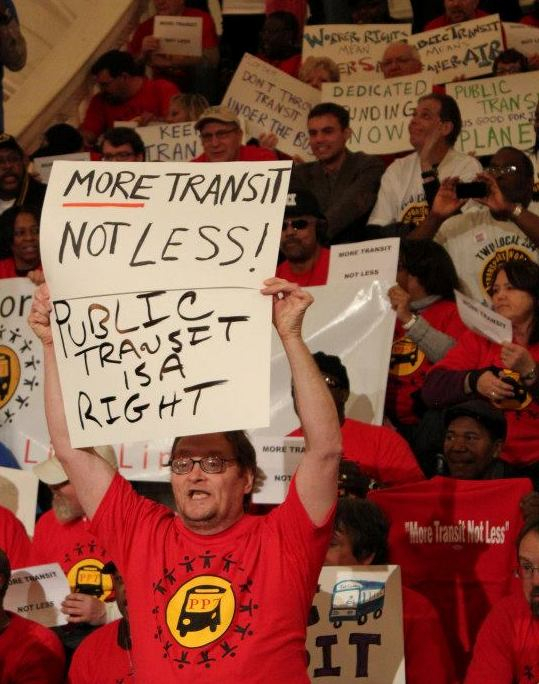 On one side of town, tourists and young professionals head downtown on light rail: clean, air-conditioned, fast. If there’s a problem with service, the city diverts buses to help.

On the other side of town, workers wait at bus stops. The buses that carry them to work come less and less frequently, thanks to service cuts. Drivers struggle to get through their routes in less time.

Both scenarios are part of a promising trend: transit ridership is at its highest since 1956, with 10.7 billion trips in 2013, according to the American Public Transportation Association.

This is despite widespread cuts to bus and rail service—and rising fares. The 2008 economic crisis started the pinch, but federal and local officials have continued to squeeze.

Whether the spike in rider numbers is caused by environmental consciousness, urbanization, or belt-tightening, clearly it calls for more transit funds, both for more frequent service and for infrastructure—not for cutbacks.

And the spending needs to be spread across our communities—not target one area at the expense of another.

Transit authorities often push cuts onto the people most dependent on public transportation, sometimes frankly called “captive riders.” They focus resources instead on luring tourists and “choice riders” out of their cars.

The latter goal is a good one, but it shouldn’t come at the expense of people who have no transportation option.

In Pittsburgh, for example, bus riders are still feeling the cuts begun during the crisis, while the city’s seen a boost in light rail, which caters to tourists and people with cars.

In 2011 the transit authority cut its budget by 15 percent, eliminating 29 bus routes. It laid off 180 workers and reduced hours for more. The cuts continued the following year, and the region lost tens of thousands of bus riders. Some switched to cars, if they had one, or carpooling. Others walk now.

“We have whole segments of our community that don’t have any transit at all,” driver Mike Harms said. In neighborhoods where service was slashed, “people have to walk a mile to a bus stop.”

As cities cut corners on traditional transit routes, bus drivers are pushed to do more with less. They feel the pressure to serve the same populations, but with fewer routes and in less time.

“As funding decreases, they cut the running time,” Harms said. “Most people want to keep the bus on time.

“In order to keep the schedule, you are going as fast as that bus will go.”

Management and political leaders are sheltered from the impact—they don’t ride the buses or trains themselves. “If there are roaches on the bus, it bothers us, it bothers our passengers,” Hanley said. “It doesn’t bother the boss.”

So transit locals are looking for new ways to pressure transit authorities, declaring May “Transit Action Month.” Bus riders are obvious partners, Hanley said. “We have a hundred people who ride our buses and trains for every active member.”

Now that Pittsburgh has restored some transit funding, the community-union coalition Pittsburghers for Public Transit is working to make sure service is restored to all parts of the region. “Transit is not just for the affluent,” Harms said.

Slingshot is a column where Labor Notes staffers take aim at the issues of the day.

Correction: Transit riders took 10.6 billion, not million, trips last year. The article has been updated to correct the figure.

Samantha Winslow is co-director of Labor Notes.samantha@labornotes.org
Related
Bay Area Transit Unions Join Forces to Win Safety Protections and Beat Back Layoffs »
Detroit Bus Drivers Strike over Violent Attacks »
Viewpoint: Concessions Are Back. So Are the Flashbacks. »
Interview: “We Are Fighting for Our Lives Against People with Money and Power” »
Detroit Bus Drivers Win Protections Against Virus Through Strike »