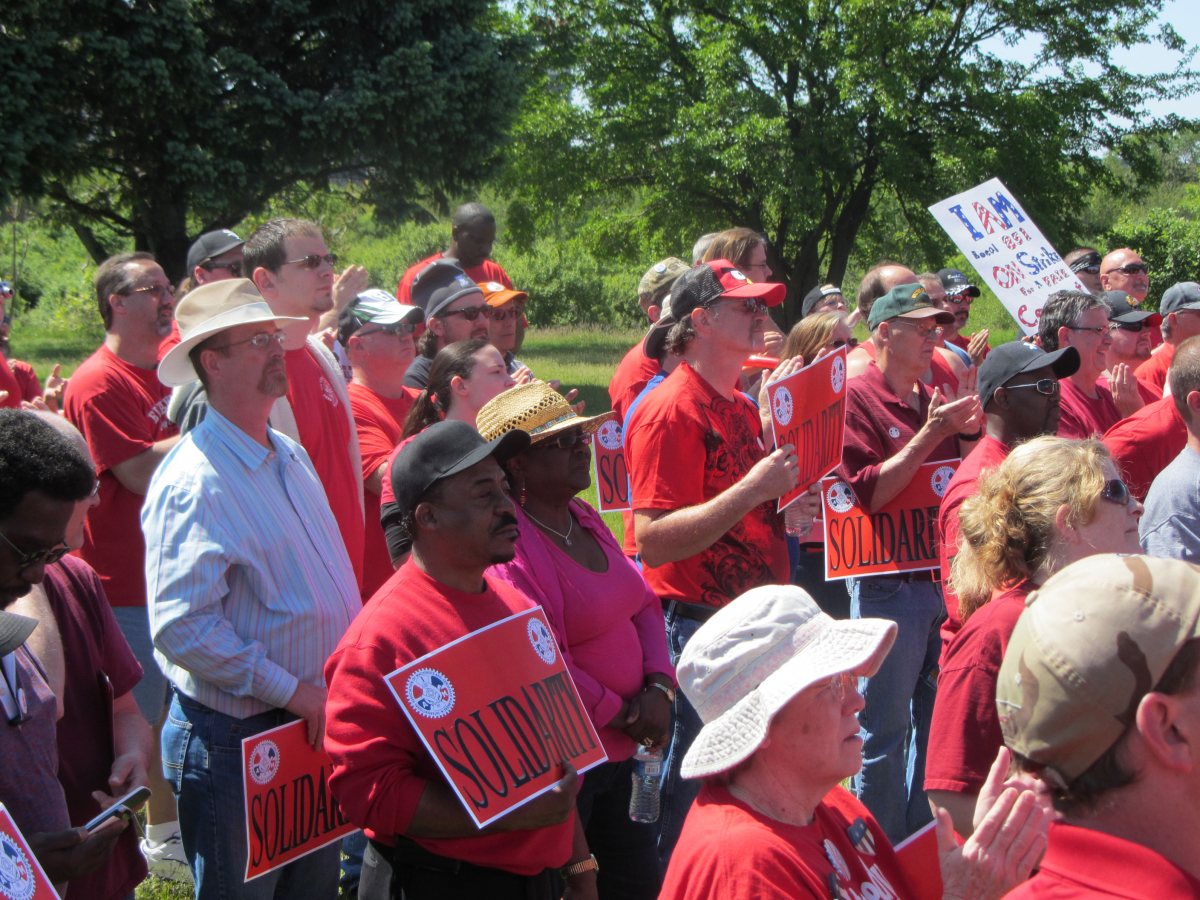 Caterpillar strikers in Joliet, Illinois, held a rally May 11 to bolster their fight against accepting wages determined by an annual survey. Photo: Bob Simpson.

Do workers need a union to negotiate “market-based” wages? Machinists at a Caterpillar hydraulic parts factory in Joliet, Illinois, struck May 1 to tell the heavy-equipment giant they deserve better.

Workers in IAM Lodge 851 had not struck in 27 years, though sister Caterpillar locals in Illinois, members of the United Auto Workers, engaged in heated battles throughout the 1990s, including a 17-month strike.

The 780 IAM workers were working under a two-tier system that put workers at $13 to $28 an hour, with the second tier at half the level of older employees.

But now the company wants workers to accept a contract like the UAW’s, which commits the second tier to market-based wages, determined by an annual local survey. Most employers surveyed would, of course, be non-union.

Wages for the top tier would also be frozen for six years, and all workers would pay much more for health care. One second-tier worker told the press the combination would leave him down $4 an hour over the six years.

Health care for current retirees would end and Caterpillar would gain much more flexibility over scheduling, wreaking havoc with workers’ personal lives.

Members voted 94 percent for a strike despite a dangled $5,000 signing bonus.

The company is known for its hard line against its employees. This winter it locked out highly skilled locomotive engine workers in Canada when they refused a 50 percent pay cut, then closed their plant and announced plans to reopen non-union in Indiana.

Pat Camardo, IAM District 8 business rep, said the UAW’s precedent did not make it easy for the Joliet local. The UAW, representing 9,500 Caterpillar workers in the U.S., accepted market-based wages in 2004.

Under that system, the UAW said last year, Cat “unilaterally increased” wages for second-tier workers a total of about 19 percent over seven years.

The Machinists believe their strike has leverage because of the skilled nature of their work and because of Cat’s global backlog of orders for its bulldozers and other earth-moving equipment. Union leaders say the walkout took Caterpillar by surprise. The mayor of Joliet spoke at a May 11 rally, but it is unclear what the Machinists are doing to build support more broadly.

Production at the Cat plant a half hour away in suburban Chicago shows no signs of slowing down, according to UAW Local 145 Vice President Dusty McCance. The IAM plant in Joliet supplies the Aurora, Illinois, plant with parts for its wheel loaders and excavators. Managers from Aurora have been dispatched to scab in Joliet.

“Caterpillar is trying to stick them the way they stuck us,” McCance said.

After seven years under the market-based two-tier system, the UAW signed up for it again last year, inking a new six-year agreement. McCance said there is “not normally any contact” between the two locals, “just because of the fact that they're a different union.”