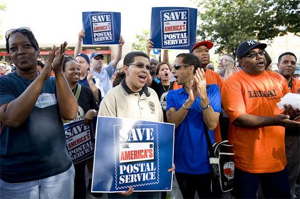 Postal workers and allies rallied in September against the push to dismantle the U.S. Postal Service, a scheme by corporate privatizers to crush the largest organized workforce in federal employment. Photo: savethepostoffice.com.

The push to dismantle the U.S. Postal Service’s distribution and delivery network is a scheme by corporate privatizers to crush the largest organized workforce in federal employment, pick apart a trusted government service, and grab the most profitable parts of the business for their own enrichment.

Consider that tens of millions of Americans used to bank their money in the Postal Savings System until it was abolished in 1966 because of pressure by the banking industry.

Despite a drumbeat of media myth-making to the contrary, the Postal Service is still very busy. Letter carriers deliver 170 billion pieces of mail each year. The Postal Service is at the center of this country’s $1.3 trillion mailing industry. Rural communities, the elderly, and many Americans who do not live online still rely on mail delivery and pickup.

But since 1970, when Congress transformed the Post Office Department into a hybrid public corporation, the USPS has been compromised by a series of compliant postmaster generals guided by a board of governors friendly to corporate privatizers.

Take, for example, William J. Henderson, postmaster general from 1998 to 2001. Three months after stepping down, he wrote an op-ed for the Washington Post describing the “innovative” $7.2 billion contract he signed with FedEx to carry and sort some first-class, priority, and express mail for the USPS. Henderson opined that “such alliances with private business don’t go nearly far enough. What the Postal Service needs now is nothing short of privatization.”

Conservative columnist George Will recently called for outright privatization, even naming the beneficiaries of such a policy. He wrote, “Surely the government could cede this function to the private sector, which probably could have a satisfactory substitute system functioning quicker than you can say ‘FedEx,’ ‘UPS’ and ‘Wal-Mart.’”

Current Postmaster General Patrick Donahoe acts like he’s on board with this scenario. His proposals to break union contracts, drop Saturday delivery, and close thousands of facilities would destroy the Postal Service’s universal delivery network and open it up to corporate scavengers.

Donahoe has requested that Congress pass a law allowing management to break the contract the USPS just signed with the clerks union and lay off more than 100,000 workers. Already, today’s jobs report indicates that cuts in the public sector are reaching historic levels, with 183,064 jobs lost just last year alone. Plans to further slash the postal service would add to the pain.

In Maine, 30 post offices and one processing plant are threatened with closure. My local, Letter Carriers Branch 391, is mobilizing public opinion by broadcasting the real cause of the USPS financial crisis: the Congressional mandate to massively pre-fund future retiree health benefits.

Back in 2006, a lame-duck Republican-majority Congress passed a bill requiring the Postal Service to set aside more than $5 billion a year to guarantee health benefits for retirees up to 75 years from now. This money cannot be diverted to cover operating expenses.

In letters and op-eds in major and small-town newspapers, on radio shows, in TV news clips, and in talks given to community groups (including local Occupy movements), we’ve explained that Congress manufactured the crisis and can easily fix it—by ending the pre-funding chokehold. Retired letter carriers do most of the public organizing, as postal regulations limit the ways in which employees may interface with customers and the public.

The four craft unions representing most postal workers—the letter carriers (NALC), clerks (APWU), rural carriers (NRLCA), and mail handlers (NPMHU)—have wisely, if imperfectly, widened their craft-based outlook to adopt an industry-wide response to the crisis threatening up to 100,000 postal jobs and the very existence of the USPS.

Following joint nationwide rallies in September to “Save America’s Postal Service,” the NALC and NRLCA launched a petition drive to save Saturday delivery, and the APWU and NPMHU are petitioning to stop post office and processing plant closures.

Both efforts have produced results: Before it disbanded, the Congressional “super committee” dropped plans to kill Saturday mail delivery, and the USPS announced a moratorium on the closings of all post offices and mail processing plants for five months—until May 15. Congress also moved forward by eight months the deadline for the Postal Service’s 2011 retiree health pre-funding payment, to August 2012.

These victories give postal workers and their unions more time to organize pressure on Congress to permanently lift the pre-funding burden, in order to save the Postal Service as a timely, reliable, and affordable six-day-a-week universal delivery network.

Deliver the Letter, the Sooner the Better

Despite inflated claims that the Internet has pushed the USPS off the map, virtually everyone depends on the Postal Service for something. On my daily rounds as a letter carrier, I delivered remittances to businesses, medicines to sick people, checks to pensioners, valuables to jewelry stores, candidate information to voters, election ballots to City Hall, periodicals and newspapers to subscribers, passports to travelers, drivers licenses and plates to vehicle operators, cremated remains to funeral homes, gifts, cards and letters to loved ones, movies to viewers, and bills to nearly everyone, and I collected tubs full of outgoing mail from businesses.

In other words, there is a great deal of money to be made if the privatizers succeed in their grab at the Postal Service.

But there is also great potential to activate many people to defend a service that they rely on and appreciate. Postal retirees are hard at work sharing the message that the postal financial crisis was caused by Congress, not the Internet. More mobilization will be needed; some good bills and some very bad ones are rattling around Congress right now.

For the past six years, postal workers have been named the most trusted federal employees. Congress members rank at the bottom in the same poll. Yet it is they who will decide the fate of the USPS—with a push from the 99 percent who still depend on it.

John Curtis retired from the Ellsworth Post Office in June and edits his union’s newsletter, The Maine Letter Carrier, published by NALC Branch 391. For news about legislation and other developments, visit savethepostoffice.com and saveamericaspostalservice.org.