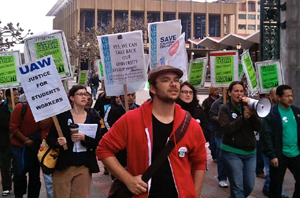 University of California graduate students vote this week for new union leaders. Challengers are pushing to engage the local in the fight to save public education, leading actions like this March 16 protest with other campus unions against cutbacks.

Thousands of graduate students across nine University of California campuses will vote this week on new leadership for their union. A slate of challengers is pushing to make the local more member-driven and active in the fight to save public education in the state.

The reform caucus behind the slate, Academic Workers for a Democratic Union (AWDU), formed last year when a handful of grad student activists who had been organizing to defend public education got together to talk about why their union was missing from the fight.

When 43 students occupied a building at UC Berkeley in November 2009 to protest another round of budget cuts, thousands of students gathered in the rain for nine hours, facing off with dozens of riot police.

Grad students were there, outside and inside. Meanwhile, their union leadership was busy moving offices and couldn’t be bothered to join the protest.

With Governor Jerry Brown’s latest budget proposing to cut another $1.1 billion in state funding for higher education, the stakes are too high for union leadership to be sitting in their offices.

The grad students’ union—UAW Local 2865—represents 12,000 graduate student instructors, teaching assistants, readers, and undergraduate tutors. The local gained recognition in 1999 after years of legal battles with UC over whether academic student employees were actually employees and not, as UC argued, apprentices. Yet the problems of overly centralized leadership were apparent already in that recognition fight. The local is essentially run by a staffer assigned by the international, who has been with the local since its founding.

The problems became glaring when a dozen grad student union members from UC Berkeley drove to the local’s Joint Council meeting last April. They came to propose that the local push for open bargaining in the upcoming negotiations on health care. But what should have been a gathering of the 80 union representatives from around the state was instead a near-empty room.

After asking why the local refused to allow members to attend bargaining sessions, the Berkeley caravan was told that a member had once thrown a chair in a bargaining session. There was no way of knowing what they might do! They could endanger negotiations.

Since then, AWDU has grown to a statewide movement with hundreds of supporters present on every UC campus. During a contract ratification vote last November, members from every campus who were angry with the weak contract began to talk on weekly conference calls. In December we held our first statewide meeting, with representatives from six campuses driving across the state or participating via teleconference.

A slate of 60 AWDU candidates is bidding for the 80 statewide Joint Council positions in this week’s election, including a full slate for the 10-member Executive Board. Voting ends Thursday.

AWDU is nonhierarchical and decentralized, with independent caucuses meeting on campuses to discuss local issues. We come together as a statewide body to share ideas and form positions through a listserv and weekly conference calls. In a collective process involving more than a hundred members, we drafted a platform outlining our goals for reforming the union and fighting for a better university.

AWDU’s first confrontation with the leadership about open bargaining was symbolic of the lack of trust leadership has for members.

Members were given no reports about bargaining last year, and no opportunities to become involved, at a moment when members were ready to mobilize.

AWDU candidates start from the principle that the strongest kind of union is one where members are engaged, informed, active, and in charge.

Since 2009, AWDU has mobilized thousands of students from across the state to join with other unions and students in protests to defend public education. This spring, on the Berkeley, Davis, LA, and Riverside campuses, AWDU is leading a fight to stop UC from cutting positions for graduate student instructors.

Its candidates are proposing a number of new policies for the local if elected, including educating and recruiting departmental stewards in every program on every campus and creating a stewards network, ensuring that members have a personal connection to the leadership.

AWDU wants to increase the autonomy of campus units to organize, giving members union resources to tackle campus-specific organizing projects. The reformers want to make staff accountable to campus leadership, so that staff hours are used in support of members’ initiatives, rather than those of the local president.

All of these changes follow from our belief that our local will be a stronger force in the fight to defend public education if our members are engaged and empowered.

For more information about AWDU’s platform and slate, visit awdu.org.

Mandy Cohen is a candidate for statewide recording secretary and a third-year doctoral student in comparative literature at UC Berkeley. She has been a UAW member since 2009 and head steward since 2010.

Chris Schildt is a candidate for head steward at UC Berkeley and a first year masters student in city & regional planning. She has been a UAW member since 2010.

As businesses, universities, states, counties, cities worldwide stumble through the recession some find themselves in a phase of creative disassembly. Hundreds of thousands of jobs are shed. World class University of California Berkeley Chancellor Birgeneau ($500,000 salary) and his $3 million outside consultants is firing employees via his “Operational Excellence (OE)”: 2,000 axed by end 2011. Yet many cling to an old assumption: the implied, unwritten management-employee contract.

Management promised work, upward progress for employees fitting in, employees accepted lower wages, performing in prescribed ways, sticking around. Longevity was good employer-employee relations; turnover a dysfunction. None of these assumptions apply in the 21 century economy. Businesses, universities, public institutions can no longer guarantee careers, even if they want to. Managements paralyzed themselves with a strategy of “success brings successes” rather than “successes brings failure’ and are now forced to break implied contract with employees – a contract nurtured by management that future can be controlled.

Jettisoned employees are discovering that hard won knowledge earned while loyal is no longer desired in employment markets. What contract can employers, employees make with each other?

The central idea is simple, powerful: job is a shared partnership.
• Employers, employees face financial conditions together; longevity of partnership depends on how well customers, constituencies needs are met.
• Neither management nor employee has future obligation to the other.
• Organizations train people.
• Employees create security they really need – skills, knowledge that creates employability in 21st century economies
• The management-employee loyalty partnership can be dissolved without either party considering the other a traitor.

Sustained employability in the 21st century economy for management and employees.