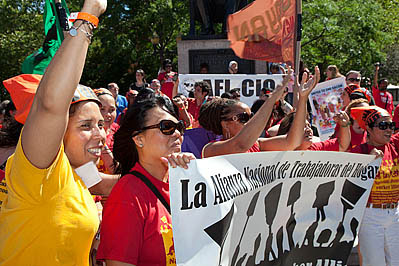 Labor Notes had a presence at the U.S. Social Forum last week, the gathering in Detroit of 15,000 activists from every different social justice movement you can think of. There was a workshop for every cause and strategy, from stopping “fracking” to using puppetry to move your campaign.

We thought we’d be posting daily blogs about the goings-on, but there turned out to be far too much to do—marches and demonstrations every day, 1,000 workshops to choose from, old contacts to renew and new ones to make. Here’s a small sample of news from the June 22-26 gathering. Look for more in the next issue of Labor Notes magazine.

* Frightened wage-thieving owners shut down their restaurant when rowdy picketers from the Social Forum appeared. The Restaurant Opportunities Center of Michigan (ROC) has mobilized for months against Andiamo, a white-tablecloth Italian place in Dearborn, over its overtime-stealing, racial-discriminating ways. A bevy of cops nervously awaited the picketers, slowing traffic for miles in either direction. They set up a quasi-checkpoint to profile the demonstrators and guide them into a “protest zone” across the street. The Rude Mechanical Orchestra marching band from New York materialized to guide the group in several rounds of “Bad Restaurant,” a funny reworking of Lady Gaga’s “Bad Romance.”

* We sponsored a workshop on Strategies for Organizing, with speakers from UNITE HERE in San Jose, California, SEIU Healthcare Illinois Indiana, and the Retail Action Project in New York. The RAP speakers recounted how they had brought lawsuits over clothing stores’ wage theft—the large sums of back pay they won for workers helped to establish the union. They used the suits to convince employers to sign neutrality agreements and then win union elections. All three unions were notable for creating strong community ties that went both ways—and for organizing workers to act like a union before they’d won an election.

* That workshop was held in the downtown building that houses the “jointness” cooperation programs of the United Auto Workers (UAW) and Ford. Nervous owners had hired a slew of extra security guards to stave off trouble from the dangerous USSFers; there was even a guard working the elevator. We left copies of Labor Notes on the tables, open to our story on the UAW convention. It argued, among other things, that labor-management cooperation had not saved jobs.

* At our workshop on “Beating Apathy in Your Union,” we ran into a Food and Commercial Workers staffer who spent an hour listening to members of several unions describe the multitude of ways they’ve dealt with being isolated and divided from each other on the job, whether it’s in a big Verizon garage in Manhattan or a homecare provider’s house on the South Side of Chicago. Then she took off, convinced unions were doing everything right—the problem is just that members don’t care. Can’t get through to everyone.

* Labor Notes took members from several friendly organizations new to Detroit on tours around the city, featuring some local history the powers that be would rather forget, like the stories of the “hate strikes” in the 1940s and the 1960s Dodge Revolutionary Union Movement. Visitors also saw sites from the Underground Railroad before the Civil War and from Detroit’s heyday as an auto town: the huge but crumbling factories still standing, the site of a 1937 sit-in near our office, the Ford Hunger March of 1932, and the original Motown studios.

* Fresh from Albany, Priscilla Gonzalez of New York’s Domestic Workers United reported on meetings between the state’s power brokers to hammer out the details of historic legislation to extend basic rights to housekeepers and caregivers. DWU’s success brought down the house at the Excluded Workers Congress, a gathering of workers historically shut out of labor law protections, bargaining, or unions. They included the welfare/workfare workers with Community Voices Heard in New York City, public sector workers not allowed to bargain in North Carolina and Tennessee, and day laborers from a variety of centers, corners, and cities, part of the National Day Laborer Organizing Network (NDLON).

* At a fundraising party for the Vale Inco strikers from Sudbury, Ontario, we bumped into Marcela Olivera, who used to work for the Federation of Factory Workers in Bolivia. She told us their monthly newspaper translated Labor Notes articles for their international page. The week was full of encounters with folks we didn’t know who knew us. Now if we could just get you all to subscribe. . .

* Armando Robles, one of many heroes of the Republic Windows factory occupation in Chicago, reported positive developments. The United Electrical Workers signed a four-year contract with Serious Materials, the company that succeeded Republic. Forty-four people are back in the shop, from the original 270. The contract includes wage increases of almost a dollar, and their benefits and seniority have been respected. They have window contracts with the Empire State Building and the building formerly known as the Sears Tower, so they’re hoping for more work soon. The company hired the most union-bashing manager from Republic, but the workers have got him figured out pretty well.

* At our workshop on the promises and pitfalls of union and worker center collaboration, panelist Nadia Marin-Molina said worker centers exist because undocumented workers “are more likely to get hit by lightning than be approached by a union.” She’s formerly of The Workplace Project in Hempstead, New York and currently on staff with NDLON. Unions can learn from worker centers that engage in what a Chinese Progressive Association leader called “the old-time way of grassroots organizing” where members are deeply mobilized and engaged. Marin-Molina said that worker centers haven’t figured out how to become self-funding like unions, but New York Taxi Workers Alliance co-founder Javaid Tariq said paying dues has been an important part of making sure taxi drivers in New York see NYTWA as their union.

* Farmworkers organized with the Coalition of Immokalee Workers in south Florida reported that after years of mobilizing that won agreements with eight corporate purchasers of tomatoes, they’re finally seeing important workplace changes. It’s been widely reported that the agreements CIW won with McDonald’s, Taco Bell, Subway, and others include a penny more per pound for tomatoes bought, but the agreements also include a code of conduct and worker-led monitoring that’s starting to make real changes in the fields. Organizers said that the third-largest producer of Florida tomatoes will install 40 tables and umbrellas to provide shade for workers. They now have the right not to work during lightning storms. And for the first time ever, CIW organizers are able to use work time to explain the agreement to workers.

* Eddie Acosta of the AFL-CIO pledged the federation’s support on immigration reform, but said that between timid Democrats and a rising conservative attitude towards immigrants in the country, change is going to be difficult. He said “we haven’t done enough” and that “there’s no alternative vision” to combat the dual problems. Acosta said the federation’s planning an alliance with worker centers and unions in other countries; the idea is for unions in the home countries to get involved with guest workers before they come to the U.S., so that workers don’t get ensnarled in unsafe or fraudulent arrangements.

* At a workshop titled “Converge 2 Convert,” speakers from different movements made clear how each has an interest in converting to new forms of energy use in order to roll back climate change. A Detroit city councilwoman said Detroit should be treated like Europe after World War II, with a “Marshall Plan,” turning it into a green energy capital. Another speaker presented research that shows the job-creation effects of spending a million dollars on green jobs is greater than the same amount on military armament. Jobs vs. the climate is a false debate.

Jane Slaughter argued that if Congress does succeed in passing legislation to start the transition to a green economy, we need to protect the workers in the polluting industries from the pain of that transition, and we need to make sure the jobs created are decent. That would be in contrast to the current situation, where GM is applauded for building a plant that makes batteries for electric vehicles—but the jobs are non-union and $12 an hour. And this is just a few miles from Detroit.

* We found that Troublemakers Union T-shirts aren’t popular just with union members. Seems everyone wants to be part of the Troublemakers and Boat-Rockers International. And plenty of people think their kids or grandkids are natural members.

Related
Troublemakers Schooled in Detroit and Philly »
Detroit Postal Workers Push to Dump DeJoy and His Ten-Year Plan »
Detroit Bus Drivers Win Protections Against Virus Through Strike »
GM Workers Ratify Contract Though 'Mixed at Best' »
GM Contract: 'Not What We Struck For' »