A Nurse in Haiti's "Unfathomable Sea of Need" 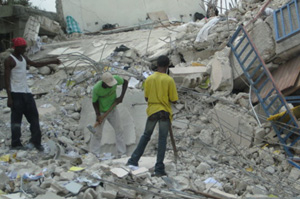 "I don't know how they do it but their strength keeps us on track. We are only here 10 days, this trip. Others have no choice but to remain and try to rebuild." Photo: Judy Sheridan-Gonzalez.

It is true what they say: no words or photos can describe the enormity of what we saw in Haiti. Nine of us nurses, eight from Montefiore Medical Center in the Bronx, just spent 10 days here volunteering at the public hospital in Port au Prince, working the night shifts.

It is hard to shield one’s self from being torn apart by the suffering we see and still feel, and do as much as we can as close as we can to the standards we hold dear. We made a rule not to use the word "should" because it was driving us crazy.

Conditions in the series of tents that serve as the hospital are far worse than anyone can imagine: sanitation is the major issue. Families sleep on the floor under the cots that serve as hospital beds for their loved ones. They empty body secretions of patients in buckets that they toss in open drains. Foul-smelling latrines serve as patient, worker, and family toilets at night as access to flush toilets and potable water is curtailed at 6 p.m. The only spigot, near where the military is stationed, is far from the ICU—the unit a colleague and I worked in.

Medical waste, garbage, syringes are tossed all over. In the morgue there are no objects to place bodies in or on—sometimes we find cardboard or junk metal. Many deaths are preventable.

There are no sheets, towels, diapers, items to clean patients with; there are constant shortages of oxygen and tools, drugs, supplies of all kinds. Malaria, typhoid, and meningitis are rampant here. Post-traumatic injuries and complications from amputations and emergency surgery are everywhere. Maternity postpartum has moms sleeping on gravel in tents with their babies.

The people are the most resilient and religious I have ever seen—I can't describe how their spirit keeps us going.

Rats run across the floors, casually passing over families’ sleeping bodies at night. The workers are so broken: no homes, no city left, no income. They are not paid. Many nurses lack even a tent. No one can sleep during the day—it is too hot.

People line up in the morning for the ER, around the block outside the hospital compound, which is gated and guarded by the U.S. military.

Port au Prince is in ruins; even houses that are standing are unstable. People are scared to live inside. The mosquitoes are rampant. We had one major flood in our compound and lost electricity as expected—and thus running water, our one luxury.

There are homeless children wandering around; a few find places to sleep and be safe. We are attached to a little 7-year-old boy named Giovanni who hangs out with the soldiers—he is quite the charmer. We are trying to connect with an orphanage for him and an older homeless girl named Sophia. Both lost parents in the earthquake. I don't know the details. There are no records as we know these things.

We give patients their charts when they are lucky enough to leave. There is no way to find records, no way to store them. The charts are a series of random notes and comments in multiple languages. We tried to organize equipment and “sign out” in the ICU. The chaos is overwhelming and yet the will to make this work carries us forward.

We’re here with Partners in Health, a wonderful organization that is said to provide approximately 30 percent of the health care in Haiti. They are an amazing group of Haitian and international workers and volunteers.

The problems in Haiti run deeper than the earthquake, which is such a cruel addition to lives already on the edge. Every time there was an aftershock, the fear was palpable. Patients who could walk ran outdoors, IVs and all, calling on God, praying, singing.

I don't know how they do it but their strength keeps us on track. We are only here 10 days, this trip. Others have no choice but to remain and try to rebuild.

They need tents and mosquito nets, so much else. You should see the joy when we distributed our energy bars at the end of our shifts (how could we eat them?). Hand sanitizer and gloves, masks, all so cherished by the families who provide the bulk of care and equipment—we are so glad we brought these things.

The Nursing School was destroyed in the earthquake—168 students were killed, many buried in the rubble—a huge impact on a fragile community of health providers. Our group plans to generate a project to rebuild the school.

We are so lucky to have been able to give the tiny bit of help that we could in an unfathomable sea of need. Never enough, but something all the same.

Judy Sheridan-Gonzalez is a member of the New York State Nurses Association and president of the Montefiore unit.

You make me proud to belong to the Montefiore Family...