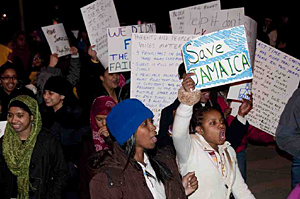 Students and teachers came out in force to fight the latest round of school closings in New York City this year. The "rubber-stamp" Board of Education approved Mayor Bloomberg's recommendation to shutter 19 schools anyway, but the decision has pushed organizing among education activists to a new level. Photo: Grassroots Education Movement—New York.

New York City Mayor Michael Bloomberg and Schools Chancellor Joel Klein's decision to close at least 19 schools in the city has not been well received. An unprecedented number of schools were slated for “phase-out” in late 2009 by the Department of Education—a gradual closing that takes several years while a school stops accepting new students. Thousands of teachers, parents and students throughout the city have responded by turning anger into action.

The district slated big schools for closure in the Bronx, Manhattan, Queens, and Brooklyn. All serve mostly working-class Black and Latino students. Bloomberg has closed nearly 90 schools since taking control of the city school system in 2002.

The latest round of closings, along with attacks on tenure and attempts to increase the number of charter schools, has made it clear that Bloomberg and Klein are on the war path. They’re targeting teachers and other United Federation of Teachers (UFT) members who’ve been working under an expired contract since October.

And now the state education commissioner has announced a new list of 54 schools statewide that will be targeted for closure or radical restructuring in pursuit of additional federal funds.

New York is proposing that each of these schools will face one of four draconian options: 1) Closure 2) Conversion to a charter school 3) "Turnaround," which involves firing at least half the staff or 4) "Transformation," which involves ominous reforms such as increased "rigorous evaluations" and "flexibility" in the workplace—usual code words for harassment and attacks on union rights.

Each closing school will increase the number of teachers waiting in limbo after school closings, "excessing," and budget cuts forced them into a pool of "reserve" teachers while they look for a permanent position.

Bloomberg and Klein have made it clear that they want the ability to fire these teachers—a move that would effectively abolish tenure and job security. School closings, union-busting and the drive toward privatization are part of the same package of destruction being delivered to our schools in the name of "reform."

But this time, people are fighting back. In the lead-up to the final decision about the targeted schools, public hearings held at each school became forums for teachers, students, and members of the community to protest.

More than 500 showed up to Jamaica High School in Queens, where chapter leader James Eterno led a spirited rally to defend the school, a center of the community for 118 years. Eterno is a presidential candidate in the UFT elections later this year, running on a joint slate of two union reform caucuses, the Independent Community of Educators and Teachers for a Just Contract.

Likewise, hundreds of teachers, students and parents came to the defense of Norman Thomas High School in Manhattan, where teachers and students carried signs saying, "We're not data" and "Save Our School."

More than 500 students, alumni, staff members and parents attended a rally and public hearing in the Bronx on January 7 to protest the proposed closure of two district schools housed in the same building, Christopher Columbus High School and the Global Enterprise Academy.

At the hearing, students, teachers and parents presented their arguments against the proposed closings. Leroy Gadson, president of the Jamaica branch of the NAACP, told school officials, "We will not let you kick our kids to the curb. You all quit on us a few years ago, but our kids never quit."

In addition to local protests at schools, activists took the fight to stop school closings to Bloomberg’s home, where 400 parents, students, and teachers showed up on January 21 to rally.

The protest was organized by the Grassroots Education Movement and Concerned Advocates of Public Education.

Students, parents, and teachers came from many of the schools slated to be shut down, as well as schools threatened by the charter school invasion.

Students in particular have played a crucial role in this protest as well as at public hearings, challenging the officials’ claims to be acting in their interests. Two students, Rachel Ali from Jamaica High School and Chris Petrillo from Beach Channel High School, have spearheaded efforts to launch a student movement, traveling to hearings throughout the city to speak against the Panel for Educational Policy’s disdain for the students who will be the first to suffer from the planned closures.

The culmination of this city-wide wave of protests was the January 26 meeting of the Panel for Educational Policy at Brooklyn Tech High School. The panel made up predominately of Bloomberg appointees prepared to rubber stamp the decision of Chancellor Klein and Mayor Bloomberg.

They were met, however, with an unexpected level of anger. While the United Federation of Teachers organized a protest of several thousand teachers outside, the real show was inside the meeting, where speakers lined up for hours for a chance to excoriate the panel and defend their schools.

The meeting began with raucous chants of "Save our Schools," drowning out the roll call. Throughout the meeting, audience members targeted Klein, booing him frequently and interrupting the proceedings with chants of "Phase out Klein."

Many speakers highlighted the racism at the heart of the school closures, pointing out that it was predominantly Black or Latino neighborhoods that were being hit with the closures. One parent demanded of the board, "Let our children learn like your children!"

A representative of the NAACP attacked the charter schools that Bloomberg champions. "These schools represent a new form of segregation and separation," he said. A teacher shouted at the panel, "Separate and unequal will not do in the 21st century."

The absurdity of the proceedings was highlighted by Jane Hirschman, founder of Time Out from Testing, and Lisa Donlan, two parent activists who broke out sock puppets to perform a skit in which the Panel for Educational Policy "Puppet" explained to the Parent "puppet" that its job was simply to rubber stamp decisions.

Despite the explosive energy of the room, the panel waited out the protesters and at 3:30 a.m., after hours of testimony opposing the closings, they voted to close all 19 schools on the list.

While the mayor and his cronies have won the first round, a new movement against school closings is gaining steam—and will now fight to hold the line against the state’s new list of 54 schools to radically restructure. The result of the hearings, as Juan Gonzalez of the Daily News argued, has been that "Public sentiment has turned against Mayor Bloomberg's dictatorial school reforms."

Last week, activists in Teachers for a Just Contract, the Independent Community of Educators, and the Grassroots Education Movement in New York City joined other activists and unions to participate in the March 4 National Day of Action to Defend Public Education.

The protesters began at Governor David Paterson’s office and continued to the transit authority’s headquarters to challenge the vicious attempt to deny students transportation to school. For teachers, this was the next step in the fight to stop school closings, to stop budget cuts, and stop attempts to tie tenure to student test scores.

At the same time, we need to connect this fight to the battle for a decent UFT contract that can demand an end to school closures and protect the rights of teachers who are casualties in the war on our schools. The 2010 elections in the UFT provide an opportunity to argue for democratic, militant, rank-and-file alternative to the failed strategies of the current leadership. We have our work cut out for us.

Nonetheless, the immense outrage and anger that has erupted around the city is poignant testimony to the potential for a real fight. People are tired of being the victims and scapegoats of the failures of public education, while the politicians who systematically underfund and undermine our schools are let off the hook.

Related
As Omicron Rages, Teachers and Students Fight for Safety Measures in Chicago and Elsewhere »
Teachers Strike against a ‘Heartless’ School Board in Biden’s Hometown »
How Oakland Teachers Took Control of Our Return to School »
Bay Area Transit Workers and Riders Demand to Unlock $1.7 Billion Already Earmarked for Jobs and Bus Service »
Jordanian Teachers Union Leaves Behind Legacy of Wins »