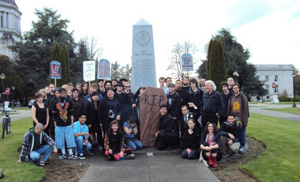 Seventy-five students from Washington state’s Evergreen State College organized a funeral for public education March 4 before caravanning to the Capitol, where they interrupted the Senate with song. Photo: Griffin Buell.

Picking up on more March 4 creativity: 75 students from Evergreen State College in Olympia, Washington, organized a funeral for public education March 4 in concert with the massive protests in California schools and on other campuses around the country. After the wake, they proceeded into the Capitol building, interrupting the Senate with a protest song to the tune of Amazing Grace (the lyrics are below).

A 25-vehicle procession snaked from the Evergreen campus along the eight miles to the Capitol, with a coffin strapped to an old station wagon out front and bicyclists directing traffic and explaining the procession to bystanders.

The students weren’t arrested, and although a YouTube clip doesn’t show it, the legislature’s television station showed the students received a standing ovation from some legislators. After the students left the gallery, some traveled to a committee room to testify in favor of an income tax on the rich (Washington is one of seven states without any income tax).

Washington state is running a $2.6 billion deficit this year, having already withstood cuts last year amounting to about $3 billion, about 10 percent of the state's operating budget. More from the state’s Rebuilding our Economic Future Coalition:

The governor’s proposed supplemental budget will cut another $46 million from the four-year higher education operating budget to cover the $2.6 billion deficit. The number of students applying for financial aid has increased by more than 30 percent in the last two years, yet over 12,000 lower income students will be cut off the state’s Need Grant, with payment to the remaining students reduced by nearly 50 percent. This equates to a loss of over $146 million in state general funds.

Dammed up by greed so crude.

I can’t afford the food.

The bright young minds of our country

Now wake to meet their doom;

So why should we apply to school,

When close ahead lies gloom?

What will we say in years ahead

When strewn across the land

Are wretches poor in heart and soul,

Made bank from others’ toil.

I say we have the right to fruits

Aloud, lament all ye who hope

To have a better life;

If our priorities don’t change

We all will end in strife.

and doom we may waylay!

Let’s make a plan while we still can

And birth a better day!

Related
Minneapolis Strike Wins Big Raise For Lowest-Paid Educators »
Collective Action Is How We Shake Ourselves Free of Pandemic Isolation »
School and Campus Workers Say: Not Until It's Safe »
Privatizers Said It Was Impossible for Chicago Teachers to Strike. How Wrong They Were. »
Will the Teacher Strike Wave Hit Chicago Again? »