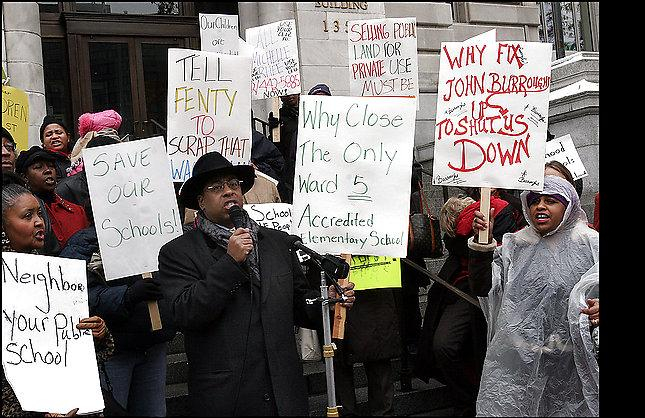 Vice President of the DC Teachers Union Nathan Saunders is harnessing the discontent of teachers, students, and parents after years of frustrated contract talks with teacher-bashing Superintendent Michelle Rhee. Saunders has also criticized union President George Parker for keeping members at bay. The two will face off in the spring.

An outspoken critic of D.C. schools Superintendent Michelle Rhee has entered the race to lead the Washington Teachers Union (WTU). Nathan Saunders, the union’s current vice-president, says the May election is a chance for teachers to take a different direction in contract talks with Rhee, which have dragged on for three years.

Rhee’s original contract proposal to swap teachers’ job security for promises of merit pay has been effectively killed by rank-and-file opposition. Saunders has been fiercely against the plan, and has also turned his critique toward President George Parker. “Rhee and company are not the type of people you need to be timid with,” he says. Parker, who will face off against his veep in the election, has repeatedly dismissed Saunders’ critiques as driven by political ambitions. Saunders says the discontent has now gone far beyond him.

The contract standstill prompted national AFT President Randi Weingarten to intervene in talks last winter. The AFT/WTU counterproposal born from the intervention fizzled, and the union and district called in an outside mediator.

In the meantime, Rhee has worked around the contract talks, seizing a “Plan B,” to place hundreds of teachers on 90-day termination watch. Then, last summer, she cited budget shortfalls as the pretext for firing hundreds more. The move became especially controversial after she turned around and hired hundreds of new teachers months later.

The “reduction in force” did not go unnoticed. DC police arrived at schools during class time to escort teachers and counselors from the buildings, prompting students—upset at the departure of some of their most beloved instructors—to walk out in protest. Students got the attention of City Council, which called Rhee to testify over the dismissals. The union led an unsuccessful legal challenge to the firings.

The AFT, and newly-anointed AFL-CIO chief Richard Trumka, entered the fray, calling hundreds to a rally against the layoffs in early October.

Even before Rhee hit town with a teacher-bashing vengeance, Saunders was working on his gadfly credentials. The union was rocked by a corruption scandal that sent former WTU President Barbara Bullock to jail for stealing $5 million from the local between 1994 and 2002. Saunders filed a lawsuit against the AFT for its complicity in Bullock’s embezzlement. He says the case set a precedent by making national unions legally accountable to rank-and-file members of local unions. The national AFT settled out of court, and paid $1 million to the local.

Following the AFT’s trusteeship, Saunders ran with Parker and took office in 2005. The “new Local 6” would fracture over strategy. The union’s rolls had already been decimated by years of non-union charter school invasion, and nearly each year brought a new superintendent determined to save the system. Nearly two years before Obama rode to victory on the hope of change, Rhee arrived in D.C. on much the same promise. Media profiles (and later Obama himself) endorsed her youthful energy and relished her quotable, tough-talking vision for reform.

Many teachers, including Saunders, charge union negotiators, led by Parker, with taking a “if you can’t beat ’em, join ’em” approach to contract talks. Saunders, who boasts a wall of diplomas from the National Labor College and Harvard’s Trade Union Program and elsewhere, remained outspoken when members were called to meetings in the summer of 2008 where Rhee and Parker presented details of a nearly-completed contract. That fall, the union rift went public. Saunders pursued a recall effort and later sued the union for conspiracy.

Parker has been criticized (and censured by the union’s executive board) for a lack of transparency in 36 months of talks. Saunders is running on a promise to alter the bargaining process to include rank-and-file teacher activists. Models of parent-teacher organizing, such as those in Los Angeles, New York, and Chicago, says Saunders, are “the future of the labor movement,” and essential to reining in Rhee—even over basic questions like snow days. This week the district initially called a two-hour delay on a day that witnessed record snowfall in D.C. Parents flooded the district with calls. “They were on the phone saying ‘the snow out there is taller than the average third grader,’” Saunders said. School was canceled.

Teachers will need that support in facing continued attacks from Rhee—whose most recent loose-cannon moment came when she implied that last summer’s fired teachers were guilty of sexual misconduct and corporal punishment. Parker called for an apology—Saunders wants her to resign.

It’s clear to a growing number of teachers and community members that Rhee’s agenda in the last three years has not met AFT President Weingarten’s repeated standard for acceptable reform—neither fair for teachers nor good for students. Now, a perennial critic of both the union chief and the schools chief is putting together a slate, opening community forums to shape a platform, and harnessing a growing frustration over the attack on public education in the District.

Paul Abowd was a staff writer at Labor Notes.
Related
Michigan Nurses Defeat AFT-Backed Raid »
Viewpoint: The AFT Shouldn't Be Negotiating Away Puerto Rican Teachers' Pensions »
How Oakland Teachers Took Control of Our Return to School »
At a Convention Like No Other, Teamster Challengers Turn a Corner »
New Jersey Welfare Workers Sound the Alarm on Safety »