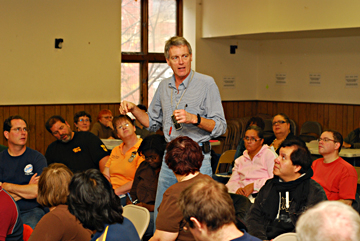 Before the trick or treating began last Saturday in Chicago, 65 labor activists met at the United Electrical Workers hall to tackle the “zombie economics” of the free market, which has put the Illinois budget on its back.

Labor Notes, two AFSCME locals, and an insurgent teacher reform caucus opened a day-long forum to examine the scary roots of the public sector squeeze, and rally for rank-and-file strategies to overcome it.

“We’re what stands between the hatchet of Wall Street and people living in the streets,” Brenner told the crowd.

In three panels with lots of time for public discussion, the meeting coalesced around a few common themes:

“The money is out there:” AFSCME Local 2858 President Steven Edwards celebrated the recent victory of a “tax the rich” resolution that he and three delegates from his local proposed on the floor of the AFSCME state convention two weeks ago.

The resolution passed despite numerous attempts by union leaders to squash the call for an end to the state’s flat income tax. Citing massive opposition to cuts in education and wide support for increasing income taxes on the wealthy, the resolution commits AFSCME’s state council to campaign for taxes that reflect who has the money to pay for them. The union called for a progressive tax that includes a 50 percent income tax on the wealthiest 1 percent of Illinois residents.

“We can run this:” Teachers from the Caucus of Rank and File Educators (CORE) spoke about their push to carve out some democracy in the AFT-affiliated Chicago Teachers Union. CORE co-chair Karen Jennings Lewis laid out the problems facing teachers—an attack on neighborhood schools and contracts, a lack of district transparency over teacher pensions, and a lethargic union leadership. CORE has stepped into the void by building a community coalition to save six schools from closure, running a victorious campaign to place two progressive candidates on the teacher pension review board, and creating a caucus that’s now making a serious bid in the CTU election this spring. (See more about their work at www.labornotes.org/node/2472)

“We are the public:” State welfare worker and AFSCME activist Amy Seidenbecker described the state’s reckless mismanagement of the pension fund—$74 billion in the red—and its bungled spending priorities (Illinois is 49th in per-capita education funding in the country). She and other activists in her local described the rank-and-file pressure campaign they led over the summer, targeting key elected officials to support tax increases and fully funded pensions.

“They’ve passed a $26 billion budget with debts that ensure next year’s shortfall will be $11.6 billion,” said Seidenbecker, pledging that the work will continue next year.

The day ended with talk of forming a solidarity committee for coordinating actions and support among various public (and private) sector unions. For information on how to get involved, contact Steven Edwards at welfarewrkr [at] igc [dot] org.