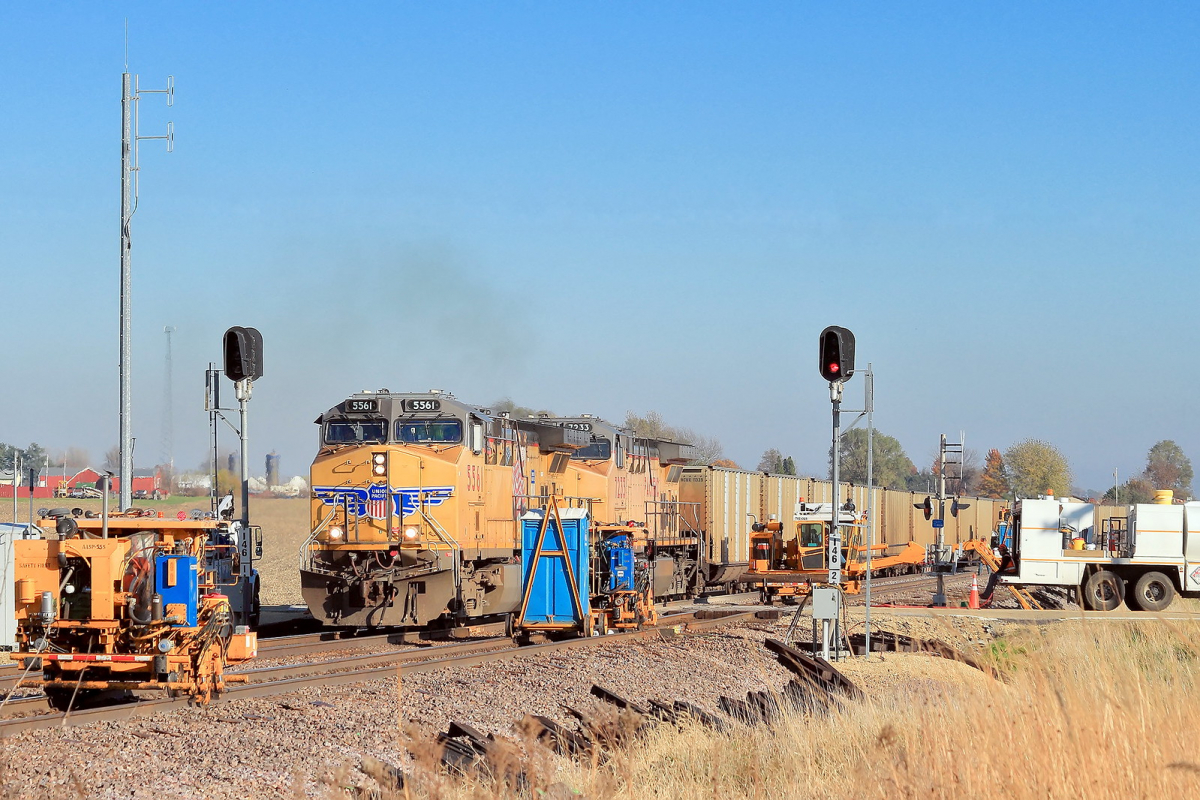 A national rail shutdown, which has not occurred since the early 1990s, would have a major economic impact. Photo: Jim Hamilton, CC BY 2.0.

Railroad unions continue their slow creep along the path to a settlement—or strike—in contract negotiations covering 115,000 workers. On August 16, the Presidential Emergency Board convened by President Biden issued its recommendations for a settlement. Many rail workers say they fall short and are prepared to strike to win more.

The PEB recommended 22 percent raises over the course of the five-year contract (dating back to 2020), which would be the highest wage increases rail unions have seen in decades. But they are offset by increases in health care costs—and come in the midst of high inflation.

The PEB also refused to touch almost any of the unions’ demands on work rules and conditions, either denying them outright or suggesting that the unions return to the slow negotiation and arbitration process they have already languished in since November 2019. Unions have been demanding a sick leave policy—rail workers have no sick days—and the PEB refused them. The PEB also refused to take a position on the strict attendance policies have infuriated many rail workers.

“By not addressing these issues and this generalized discontent among the workforce, the PEB has acted irresponsibly, their recommendations doing little to nothing to stem the tide of discontent nor address the ongoing mass exodus of workers from the industry,” said Jason Doering, general secretary of the cross-union solidarity caucus Railroad Workers United.

The rail negotiations are one of the largest instances of private-sector bargaining in the U.S., in one of the country’s most heavily unionized industries. At the table are the major Class I freight railroads and 13 rail unions, which are divided up by craft and unions range in size from hundreds to tens of thousands of members.

A national rail shutdown, which has not occurred since the early 1990s, would have a major economic impact.

The PEB recommendations are not binding. Unions and railroads have to agree on their terms. The leadership of the rail unions are now seeking to turn the PEB’s proposals into a deal.

While the unions briefly operated with a united front (albeit in two separate coalitions) during the most recent stages of bargaining, the unity has not held since the PEB issued its recommendations. Three unions affiliated with the Machinists—the Transportation Communications Union, the Brotherhood of Railway Carmen, and IAM District 19—announced a tentative deal with the carriers on August 29. According to a letter sent by the union to Machinists rail members, the tentative agreement matches the PEB’s recommendations. The three unions together represent 15,000 of the 115,000 rail workers in negotiations.

Two of the largest rail unions, the Brotherhood of Locomotive Engineers and Trainmen (BLET) and the Sheet Metal Workers’ Transportation Division (SMART-TD), already held post-PEB negotiations with the railroads, though they did not yet reach a tentative agreement.. These unions represent conductors and engineers. Workers in these “operating crafts,” as they are known, have a number of non-economic issues that were left unresolved by the government’s proposal, including the draconian scheduling policies that led the two unions to issue a strike threat last year.

The Brotherhood of Maintenance of Way Employees (BMWE) also held three days of negotiations with the railroads without reaching an agreement. One of the BMWE’s core issues is that many members travel long distances on work assignments without being fully reimbursed for travel, food, and lodging expenses.

SURVEY HINTS AT NO VOTE

So how do rail workers feel about the proposed deal?

A survey by Railroad Workers United, a cross-union caucus of rank-and-file rail workers, indicated overwhelming opposition to unions signing agreements based on the PEB recommendations. The online survey, which was passed around networks of rail workers, got 3,162 responses.

More than nine in ten respondents said they would vote down a tentative agreement based on the PEB’s recommendations.

When asked if railroad workers should strike once released from the “cooling-off” period required by the Railway Labor Act, 96 percent said they should.

Two unions, the Brotherhood of Locomotive Engineers and Trainmen (BLET) and the Brotherhood of Maintenance of Way Employees (BMWE), had already opened strike votes before the PEB released its recommendations. BLET members voted 99.5 percent in favor of authorizing a strike before the PEB announced its proposal. The BMWE sent out ballots before the recommendations and was scheduled to complete its strike vote earlier this week. The union has not yet released the results to the public.

For the 10 unions that have not reached tentative agreements, the period during which they are prohibited to strike is dwindling. After nearly three years of negotiations under the lengthy and convoluted process dictated by the RLA, they could strike as soon as September 16.

These unions are expected to continue negotiating with the railroad carriers, and could come to a deal at any time. Once they’ve reached a tentative agreement, rail unions typically agree to an extended cooling-down period to hold ratification votes, which could drag the clock out even longer.

The midterms also loom over the rail union leadership’s strategy in these negotiations. A Congress controlled by the Democrats is viewed as a much friendlier mediator—or enforcer—of labor peace than the threat of a deal forced on them by a Republican majority.

If the RWU survey is any indication of how rail workers feel about the government’s recommendations, any vote on a contract that’s closely based on PEB proposals could be met with significant energy to vote it down. A no vote would send union leadership back to negotiations and possibly force a national strike on the railroads.

Joe DeManuelle-Hall is a staff writer and organizer at Labor Notes.
Related
What Would It Take For Rail Workers To Win? »
Could We See a Rail Strike? »
‘We Are Not Done Yet’: Railroad Track Workers Reject Deal »
Joe Biden Thinks a Rail Strike has Been Averted. Do Rail Workers? »
The Right to Strike Is at Stake on the Railroads »