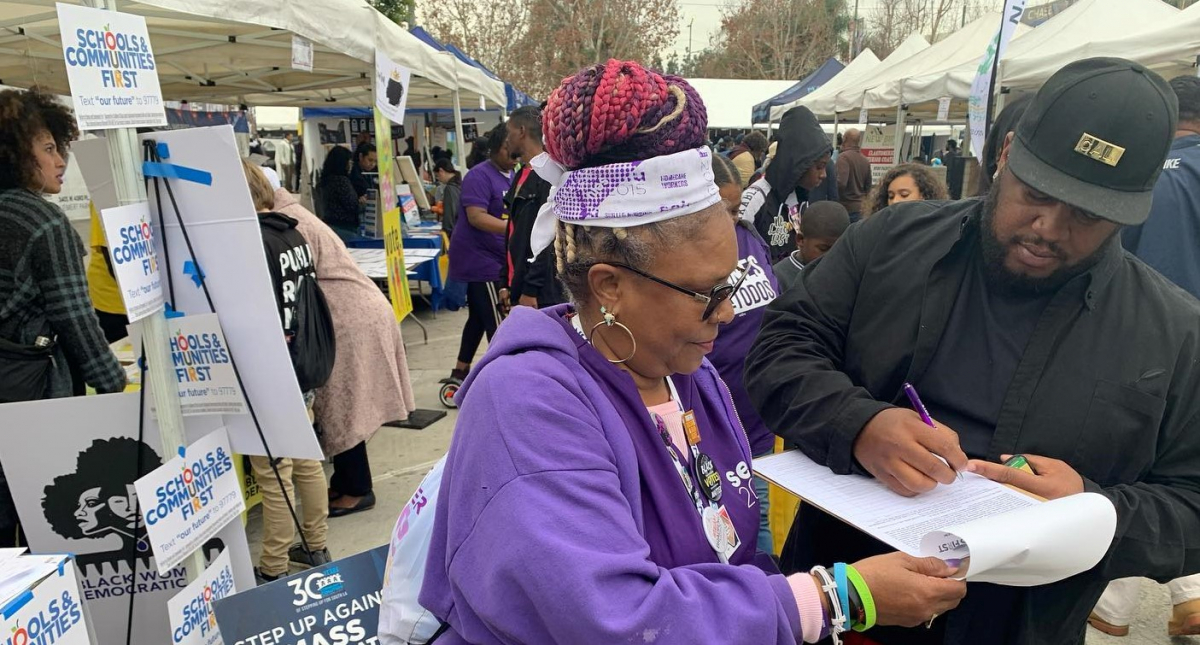 Luckily, the bulk of signature-gathering was completed before the pandemic hit. A massive volunteer effort alongside paid signature collection helped the campaign pull in a record-breaking 1.7 million signatures by the end of March. Photo: SEIU California

California’s November ballot will feature a challenge to the notorious Proposition 13, which in 1978 helped to inaugurate the decades-long neoliberal assault on labor.

Prop 13’s anti-tax, small government campaign, with a dog-whistle racist subtext, created a national template for conservatives to simultaneously attack public sector unions, public employees, and the people they served. For the right wing, this was the lab experiment for Austerity 101.

In a time of high inflation, Prop 13 exploited fear—older homeowners on fixed incomes were afraid that rising taxes would drive them out of their homes. It rolled back assessments to 1975 rates, set property taxes at 1 percent of value, and capped increases at 2 percent per year, no matter the inflation rate or the increase in market price of the property. When it passed, grandma breathed more easily.

But grandma was not the biggest beneficiary of Prop 13. The same rules applied to commercial property—including giant corporate-owned properties like Chevron and Disney. The consequent plunge in property tax revenues to local and state government forced enormous cuts to social programs and schools, led to layoffs of public employees, and established a new normal in the Golden State, described by former California Federation of Teachers president Raoul Teilhet as “poor services for poor people.”

ANSWER TO A DISASTER

Prop 15 is the long-awaited answer to this disaster. It’s the product of a 10-year-old coalition of unions and community groups, now known as Schools and Communities First, with a couple of previous progressive tax victories under its belt. Prop 15’s passage will mean commercial property is assessed at current market value, not purchase price, for tax purposes. In a non-COVID year that change will raise $10 to $12 billion for schools and local services. In the Pandemic Depression, it will mean a bulwark against soaring class sizes and public sector layoffs due to plunging tax revenues.

Carefully crafted after years of opinion research funded by public sector unions, it exempts commercial property below $3 million and all residential property, including rental units. It also eliminates a tax on business equipment that mostly affected small businesses.

The bulk of the campaign’s funding comes from two of the biggest unions in the state, the California Teachers Association (affiliated with the NEA) and the state council of the Service Employees (SEIU). But the backbone for the coalition over the years has been three organizations that spearheaded a Millionaires Tax ballot campaign in 2011: the California Federation of Teachers (the other statewide teacher union, affiliated with the AFT), California Calls, and the Alliance of Californians for Community Empowerment.

They have been joined in the Schools and Communities First coalition by virtually the entire labor movement, as well as hundreds of community, civil, and immigrant rights organizations, and a seemingly odd bedfellow or two like the Chan Zuckerberg Foundation, the philanthropic arm of Facebook founder Mark Zuckerberg and his wife.

Although the measure is opposed by the usual suspects like the California Chamber of Commerce and the right-wing Howard Jarvis Taxpayers Association, some large commercial property owners like Facebook stand to gain from the measure: Prop 15 would level the playing field that currently gives an unfair tax advantage to older businesses that purchased their properties decades ago.

Although the COVID-19 pandemic disrupted signature gathering, initially causing worries whether the measure would qualify for the ballot, in fact the coalition had already pulled in a record-breaking 1.7 million signatures by the end of March. This was due to the scope of the coalition and a massive volunteer effort alongside paid signature collection.

Until the coronavirus put a stop to it, I staffed a table on campus along with other members of my union, AFT 2121, which represents faculty at City College of San Francisco. One union sibling, Kathe Burick, a dance instructor, said, “I’ve never had such an easy time filling petitions. Students, staff, faculty, even administrators—as soon as they heard what Prop 15 would do, they signed.” Local 2121 contributed 1,600 signatures to the CFT’s 20,000. In all the campaign’s volunteers collected 225,000.

Passage of Prop 15 is not a slam dunk. By their nature progressive tax measures attract well-funded enemies who, in addition to their war chests, have few scruples about lying to the electorate. On August 6 a judge ruled that the election information guide mailed by the Secretary of State to every registered voter had to be changed to eliminate “false or misleading” arguments by opponents. One claimed Prop 15 would allow the legislature to raise taxes on homeowners.

Another common tactic is to muddy the waters by implying that the tax in question will affect everyone. Undaunted by the judge’s decision, a spokesperson for the opposition commented, “This one will be won once voters know that Prop 15 is a $12.5 billion tax increase they can’t afford.”

In fact Prop 15 will draw 92 percent of its revenues from just 10 percent of commercial property holders, a reflection of the concentration of wealth in a state that, if a country, would contain the world’s fifth-largest economy—yet can’t seem to find money to properly resource its schools and services.

In addition to the usual flood of misleading advertising, Yes on 15 activists face the challenges of a pandemic election. Without the ability to canvass in person, the campaign will have to rely on phone banking, text banking, virtual house meetings, and the like. It remains to be seen whether labor’s grassroots “people power” can be channeled as effectively as usual under such conditions. But the need and the momentum for progressive taxes are real.

The California Labor Federation emerged from its annual convention the first week in August—held on Zoom—with solid commitments on two November ballot initiatives: Yes on 15 and No on 22. The latter is an attempt by Uber and Lyft to reverse legislation passed earlier in the year that reclassified drivers from contractor status to employees.

Speaking at a recent Zoom rally for Prop 15 hosted by California chapters of the Democratic Socialists of America, United Teachers of Los Angeles President Cecily Myart-Cruz said, “We’ve got to be able to pass Schools and Communities First, as one measure, and then come back with another measure, and another, so that we make the rich pay their fair share.”

Related
California Continues to Record Dozens of Workplace Covid Outbreaks Every Day »
The Grocery Companies Denied Us Hazard Pay—So We Went Over Their Heads »
New California Data Shows Covid Is Spreading in Workplaces »
Will the Stimulus Stop States From Slashing More Jobs? »
It Took a Boatload of Uber Cash to Beat Self-Organized Drivers »