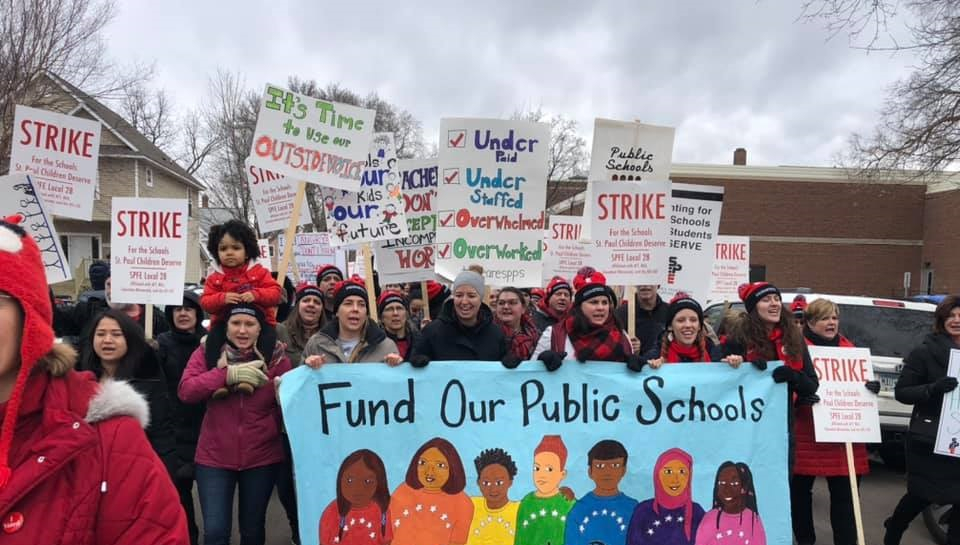 UPDATE, March 13: St. Paul teachers, aides, and community school professionals ended their strike today after four days. A settlement was reached following an all-night bargaining session. Teachers reported back to school at 1 p.m. and students will return on Monday.

Details of the tentative agreement are not public yet, but the St. Paul Federation of Educators announced that it had won more bilingual aides, nurses, social workers, psychologists, and intervention specialists, along with reduced workloads for special education staff. The union also got the board to agree to support a moratorium on charter-school expansion.

The public health crisis surrounding the spread of the coronavirus, which is prompting school districts around the country to close, created additional pressure to settle.

Teachers and support staff in Saint Paul, Minnesota, are on strike for the first time since 1946.

The union says students need more counseling and mental health support than the district and current staff can provide.

The strikers are demanding a mental health team at every school. The team would include social workers, psychologists, nurses, and behavior intervention specialists, in numbers proportional to the number of students in the school.

Despite marathon bargaining sessions over the weekend, the district made no real movement on the core issues. The union rejected the district’s last-minute offer to call off the strike and take the contract dispute to arbitration instead.

“There are so many kids with so many issues,” said middle school teacher Leah Van Dassor. “Kids are depressed because they have problems at home. They don’t have anyone to talk to.”

“A students that had a parent pass away, instead of acting out, becomes completely withdrawn,” she said. A newly homeless student “has a meltdown, and I have to evacuate the classroom.”

In addition to its mental health demands, the union is asking for more bilingual teacher’s aides and limits on class size for special education.

“It’s too bad that all these important social services fall on the shoulder of the schools, but they do,” said Van Dassor, who is also on the bargaining team. “We have to try to figure out a way to help.”

St. Paul educators are joining the strike wave following 2019 strikes in Chicago, Los Angeles, and Denver, and statewide strikes in 2018 in West Virginia, Arizona, and Oklahoma.

But this moment was a long time in the making. The union wielded the threat of a strike in its three previous contract campaigns to win smaller classes, less standardized testing, and new staff to support restorative practices instead of harsh discipline in St. Paul schools. In those contract campaigns, the union opened up bargaining not only to members, but also to parents and community.

Like the administrations in L.A. and Chicago, the St. Paul district administration claims it can’t afford the union’s demands for more staff, smaller class sizes, and smaller caseloads so students get more attention and interventions when needed.

“The district would like us to just talk about raises, accept their strategic plan, and go away,” Van Dassor said.

The district ignored the staffing proposals and only offered a 1.5 percent wage increase the first year and 2 percent the following year.

“We were requesting more staff to work with second-language learners, but also to help out our parents,” said Sylvia Perez, a cultural specialist.

Perez is part of a bargaining unit called community schools professionals. It’s the smallest of the three groups in the SPFE that are bargaining together and on strike.

The positions vary from school to school, but they work on parent involvement, newsletters, permits, events, and community partnerships.

“When parents come to the school and we don’t have someone who speaks the language, it’s not fair,” Perez said. “It’s not fair to ask a child to interpret. The district wants to be a welcoming environment, and someone shows up and you can’t talk to them.”

Education assistants, who work with students in the classroom, are the third unit. They are asking for more bilingual staff and more training.

The union has been bargaining for 10 months, including mediation, with little movement. In February, members voted by 82 percent to support a strike.

State law requires that all teacher union contracts are two years long, and all the teacher contracts in Minnesota expire at the same time. That’s a quick turnaround from contract to contract for locals—especially when you consider that St. Paul has been bargaining for more than six months.

To build pressure, union members passed around a strike petition, packed school board meetings, and held informational pickets at their schools and a rally at district headquarters.

Each school has a strike captain; there are also area strike captains, responsible for three or four schools each. While the bargaining team was in mediation all weekend, members picked up picket signs and materials.

The union gathered testimonials from members about the mental health crisis in St. Paul Public schools. When it was time to gather examples to make a case for more mental health services, “each of us had a story without even trying,” said Van Dassor.

Existing staff are often working with high workloads and caseloads. Counselors often do college and career advising. School psychologists—there’s just one for every 1,200 students—only test for learning disabilities for the individualized education program (IEP), the personal plan that is created for each child who needs special education; they can’t offer support to the students they see.

Most social workers work with the students with IEPs. Behavior intervention specialists work with teachers on plans and with individual students on plans related to their developmental or emotional needs.

The union reports that 20 out of St. Paul’s 50 schools have no nurse; 10 more share their nurses with other schools. Van Dassor said sometimes school secretaries hand out medicine to kids. “They’re not trained to do that,” she said.

The district made an offer the week before the strike: it would hire a team of 10 support staff, working out of district headquarters, for its 50 buildings and 37,000 students.

The union rejected the offer. “We want people in the buildings that people know and trust,” Schatzlein said, “working with them to deal with the trauma they deal with every day.

“If you are talking about real support for kids—10 people, 37,000 students? Is that really support?”

In the past, the three units bargained separately. For many years the biggest group, the teachers, would be the first to bargain. Then the educational assistants would bargain, and then the school professionals.

“We always felt we were left out,” said Perez, a cultural specialist. “We didn’t get what we were asking for.”

Four years ago, all three units took strike votes together. Two years ago, they joined together at one bargaining table. “Because we were all at the table, the district had no choice to hear all of us at the same time,” Perez said.

Last year, Perez and other members from both the non-teacher units decided to take it further—they wanted the union’s name to include them. They brought it to membership meeting and asked for a vote, where it passed.

The different employee groups don’t have meetings or get their lunch and other breaks at the same time, so they don’t always interact. But because of the joint bargaining and the union’s new commitment to unity, “now I make a conscious effort to reach out,” Van Dassor said. “I’m a far better union member, because I know what’s going on in all the units.”

Now they’re out on strike together. “Wherever we go,” Perez said, “we are all seen as one.”

Samantha Winslow is co-director of Labor Notes.samantha@labornotes.org
Related
As Omicron Rages, Teachers and Students Fight for Safety Measures in Chicago and Elsewhere »
Teachers Strike against a ‘Heartless’ School Board in Biden’s Hometown »
How Oakland Teachers Took Control of Our Return to School »
Jordanian Teachers Union Leaves Behind Legacy of Wins »
The National Guard Came to St. Paul to Repress Protests. We Kicked Them Out of Labor’s Hall. »